I've been experiencing a very annoying problem lately. Often, I've got my MacBook Pro connected to power when I'm working from the office. At home, I often leave it unplugged until the battery is too low to continue at which point I plug it in.

The problem occurs when my device is connected to a power supply. My battery indicator shows 100% charge which is fine. But sometimes the battery starts draining and the menu bar icon says "Battery not charging," even when it's connected to a wall socket, and it keeps draining until absolutely dry. It doesn't even warn me the battery is running low because it shows "Power source: Power adapter" which I guess disables the Operating system low-battery warning. This has happened on multiple occasions.

Does anyone know what might be causing this behavior and what to possibly do about it? 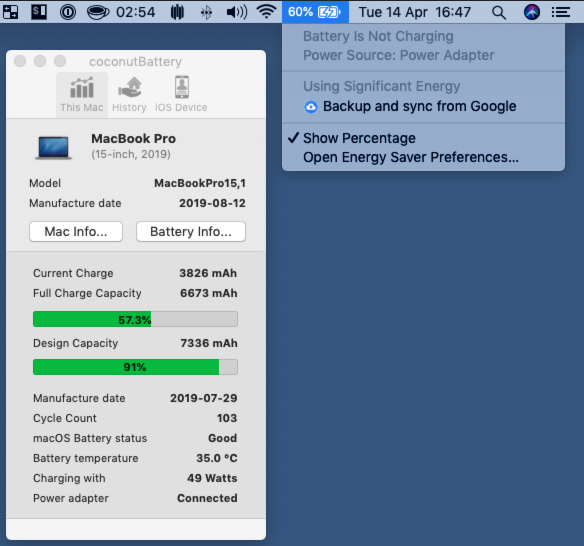 There are two things that can be attributed to this:

You are likely using the wrong power adapter; it's too "small" for your particular MacBook. Your machine requires the 87W power adapter.

If you take a look at Apple's support document Find the right power adapter and cable for your Mac notebook under the USB section, you'll notice that all of the adapters from the 29W that charges the MacBook to the 91W that charges the 16" MacBook Pro all look identical so it's quite easy to mix them up. While you can plug in any of these into any of the MacBook computers (plain, Air, or Pro) and while it will "charge," you won't get optimal results.

What you're experiencing is what's in the second point. The adapter is connected (and detected) but it simply cannot supply enough power to charge and for you use the computer at the same time. If you notice, Coconut battery is reporting that it's charging with only 49W, yet the battery isn't charging. You're likely using the 61W adapter. (That number is a misnomer because that current is what it's drawing from the power adapter current, not what's going to the battery).

As of Catalina (10.15.5) Apple has implemented a feature called Battery Health Management that will stop charging and allow it to discharge to a predetermined charge (about 80%) before recharging again. This happens even while the charger is plugged in and working.

Therefore, assuming you're using the correct wattage charging adapter, this could be perfectly normal behavior.

What helps me (it's not a real solution but better than nothing) is: As soon as I see it misbehave I unplug the cord from the power supply and plug it back in. This resets something and it goes back to normal for a while.

It's not 100% solved but I've experienced the problem a lot less since I started consistently charging my MacBook from the right side instead of left. There is some correlation between overheating and stopping charging but I haven't pinned the issue down just yet. But what I can tell is that when the MacBook stops charging (even when plugged in) it feels hot to the touch (and temperature sensors also indicate increasing heat being generated).

The battery drain did, however, occur again once or twice in the last 6 months but that was when my MacBook was under great stress due to running docker and zoom (with encryption enabled) at the same time.

So it just might be a hardware overheating issue that's kind of solved by switching site side you charge your MacBook. 🤷‍♂️

I had this same problem and it stumped me for months. I swapped three different chargers and nothing worked!

It turned out that the problem was due to the USB-C cable going from the charger to the Macbook and I never noticed because when I was swapping out the chargers I was re-using that particular cord. The USB-C cord I had been using was apparently only able to carry about 85 Watts.

Long story short: When you swap out the charger, make sure you swap out ALL of the cables (including the USB-C one) with brand new ones.

Not the answer you're looking for? Browse other questions tagged macbook-pro battery charging .