How do I quit multiple versions of Firefox with Apple Script?

I have two versions of firefox. One has an application name "Firefox" and the other is called "Firefox 2".

I'd like to tell AppleScript to close both instances of Firefox. Here's my code

It's weird because I can type this into Script Editor, but when I press save it always turns into this.

I ran this code and I'll put the output below.

And here's the error code: error "Firefox got an error: Connection is invalid." number -609

How do I make sure they both close?

I'm assuming that you made a physical. on-disk copy of Firefox.app, and renamed it in the Finder to "Firefox 2.app". Is that correct? If so, that is going to cause you headaches. The visible name in the Finder isn't really used by the system much. The system uses the app's bundle identifier — for Firefox, I believe that's something like 'org.mozilla.firefox' — which is found in the info.plist file within the app bundle, and draws display names and such from that plist also. Unix, on the other hand, tends to use the name of the executable, which is in the MacOS folder inside the app bundle. Since your physical copy will have the same bundle ID as the original, the system will get confused if you try to distinguish between the apps that way.

The normal way to run two instances of an application is to use the unix open command with the -n option, e.g., one of these:

Each opened instance will have the same name and bundle id, but they will have different process identifiers (pid), and you can distinguish between them using those. There are a few different ways of doing that, depending on how you've set things up, but for a quick hack in AppleScript you can use something like:

Whichever unix ID is lower should generally be the instance that was launched first.

To keep Script Editor from changing "Firefox 2" to "Firefox", the real issue you're having, the following example AppleScript code will resolve your issue and allow for a graceful quitting of both occurrences of Firefox:

In the screenshot below you can see in the Replies pane that each occurrence of Firefox returned error number 0, which is a graceful quit! Any error number other then 0 means something went wrong. 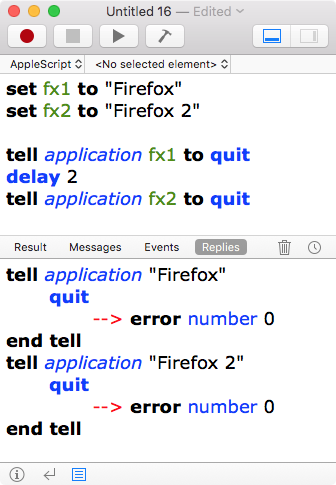 Note: The example AppleScript code is just that and does not contain any error handling as may be appropriate. The onus is upon the user to add any error handling as may be appropriate, needed or wanted. Have a look at the try statement and error statement in the AppleScript Language Guide. See also, Working with Errors. Additionally, the use of the delay command may be necessary between events where appropriate, e.g. delay 0.5, with the value of the delay set appropriately.

If you do a 'ps' from the command line you'll get the PID for each version of Firefox. You can then kill a process by typing kill -9 PID. There should be a way to grep out the PID for each process and then kill each one. Maybe use awk which i know little about.