Excel is unusable for large files that link to each other

Although the raw data file is large, the data analyst can open the file and edit it without significant performance issues.

My iMac will open the raw data file using Excel for Mac (64 Bit version), however, Activity Monitor shows Excel running the CPU at ~200% even as 'rest', i.e. no calculations being performed.

As soon as I edit the file in any way, even something simple such as inserting a row in a worksheet, the CPU usage increases to ~775% and the data read rate drops to <1MB/s.

Excel then hangs and is unusable.

The problem persists in each of these environments.

I've spent around 6 hours on tech support calls with Apple, Microsoft and Parallels but no progress has been made.

If the file was corrupt I'd expect the data analyst to be experiencing significant issues with the file, but he isn't. This seems to point towards this being a local problem, i.e. my system.

We've run Excel files approaching 300MB in the past, using client Windows computers (nothing particularly advanced in terms of specs) and even though the files took (say) a minute to load they were usable.

Any help would be hugely appreciated.

Apologies to all that took the time to add comments/suggestions - several weeks have passed without an update from me.

In short, there are two issues : collaborating using linked Excel files in Dropbox, and slow performance in an Excel For Mac environment.

It became clear that Excel for Mac simply cannot handle linked files which are not saved on a local drive. The data analyst and I have had to revert to a single integrated file, which is working but of course increases the size of the file considerably.

The speed issues are a different matter and we still haven't resolved those. Despite the data analyst having a 'lesser' spec MacBook Pro (2019; 1.4Ghz quad core i5; 8GB RAM) than my iMac (2012; 3.1Ghz quad core i7; 16GB RAM) his machine is able to operate the data file far more quickly.

At that level of data, it’s often easy to kill Excel whether you’re on Windows 10 or macOS.

The code base for 2020 Excel is the same on Mac and Windows with just some features selectively enabled for each platform. This was unified in the past 16 months, so you would need to simplify your calculations by troubleshooting your spreadsheets or perhaps move to an engine that’s less likely to get caught up like python or R. The main difference on Mac vs Windows is major feature and UI code for each platform, not the core data handling.

Depending on your linking, you might also just need a database which can handle indexing and optimization better than Excel can.

These are not at all trivial suggestions, so I know you’d prefer to not fix Excel, but it has so many layers of features, that you can stray away from performance and end up with a very fragile workbook in practice. There’s only so much stripping of charts and data you can do in some cases when you overload Excel with code and graphs and conditional calculations or worse, looping conditions that it cannot self detect or alert you. 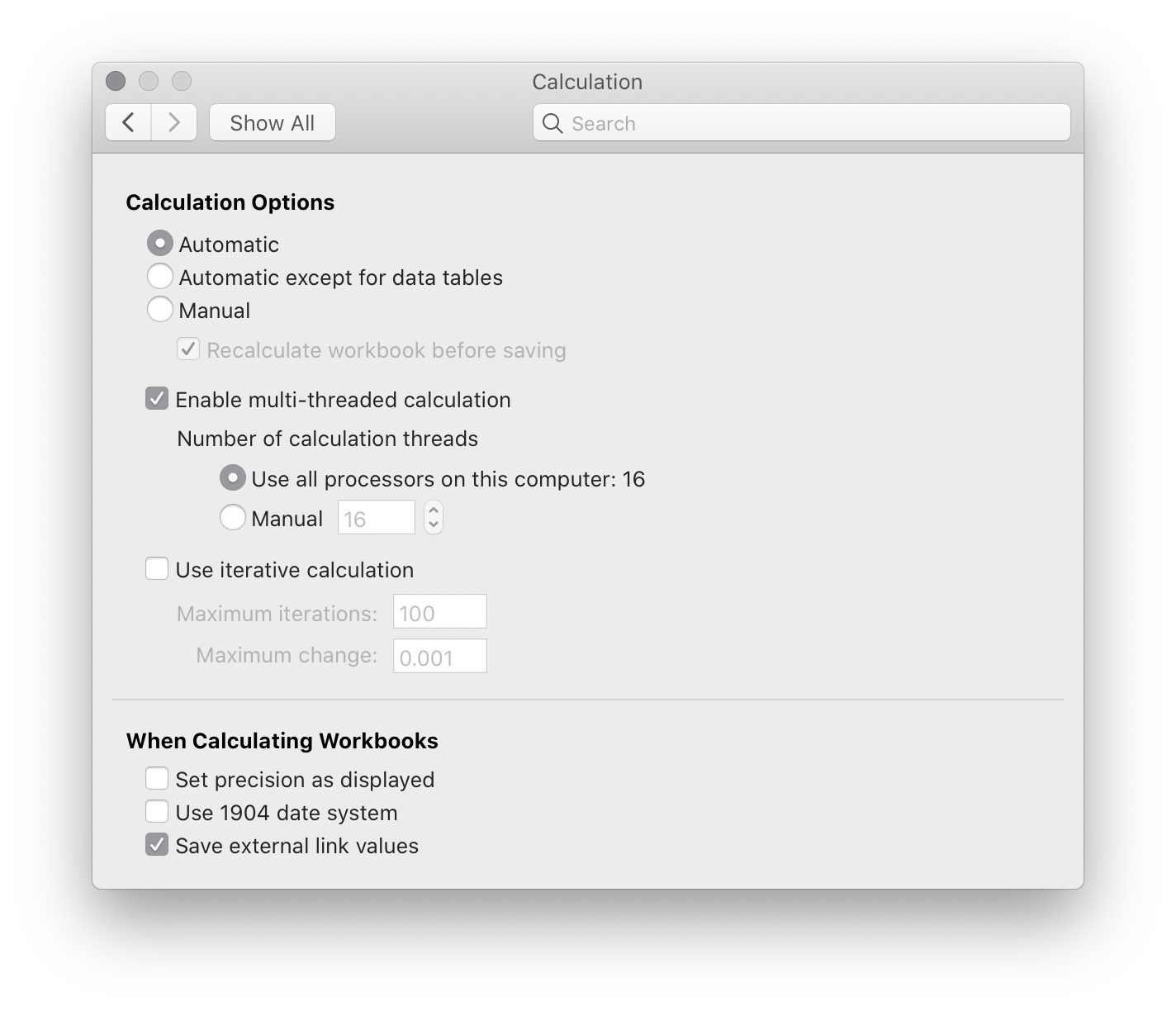 In the above screenshot you'll see that the Automatic radio button is selected. This is great when your workbook doesn't contain a huge amount of data, but will definitely slow things down if it does. Why? Because it means that every time you do anything that requires a recalculation Excel is having to recalculate the entire worksheet (or workbook depending on how you've set things up). So experimenting with the other two options may be worth a shot.

In relation to enabling multi-threaded calculations, this may or may not be preferable depending on your workbook. I know this sounds counter-intuitive, but some functionality in Excel doesn't support the use of multi-threading, and if you're using enough of those functions (especially in such a large file), then Excel will run slower if multi-threading is enabled than it would if it wasn't.

Things that Excel will only handle single-threadedly include:

So it could be worth disabling this if it's enabled to see what impact, if any, it has.

Of course, if it's currently disabled, it may be worth enabling it and seeing what effect that has as well. It really depends on your workbook design.

Not the answer you're looking for? Browse other questions tagged ms-office memory parallels-desktop cpu .

7
How many CPUs can be assigned to a Parallels Desktop VM?
7
How similar is Microsoft Excel for Mac to Excel for Windows?
4
iMac slow and unresponsive after Mavericks
2
excluding Windows 7.pvm from Time Machine
2
Excel 2011 crashes when I work on a large Excel file
0
Excel on Mac - View Multiple Files at Once
0
Can't open file Excel for Mac