Why does my iPod Classic cut off the end of certain songs?

Something that I've been noticing happening more and more is that some songs will play just fine but then at some point they'll just stop. The little time counter will jump to where it appears there is two seconds left in the song. And it will just sit there for several seconds and then then proceed to the next song.

And what I've noticed is that it tends to happen consistently with the songs that are problematic.

I've searched all over to figure out what might be causing this but I haven't had much lock, possibly because the symptoms are so vague ("some songs cut off", etc.)

My music collection, which is always pretty much filling the device, is 100% MP3 from a wide variety of sources (ripped, bought from Napster, etc.) and everything plays fine in Winamp on my PC so it doesn't seem as if the files themselves are completely corrupted.

My guess is that there is something about the files that the iPod is choking on but I can't figure out what that might be. If I'm lucky it's some weird tagging quirk (i.e., can be fixed in the individual files) but I really just don't know, and it seems to be happening on an increasing number of files, including files that played just fine before. Sometimes an entire album or artist will consist of files that cut off.

If this is just some known issue, do the latest iPod Classics (Generation 6, 160GB hard drives) still have this issue? I'm almost hoping that this is a sign of a dying iPod so I can upgrade :)

The first thing to check is to see if iTunes has marked those specific songs to end early. Next, try re-encoding the song at a lower or different bitrate and syncing it to the device. Often a glitch in the file can cause iPods to skip to the next song, but the same binary file plays through on macs with better code for handling errors. Lastly, it could be error creeping into the filesystem structure on the iPod. Once you're sure you've backed up everything from the iPod, you can enter disk mode and use Disk Utility (on the mac - on Windows there are lots of disk formatting tools) to zero the drive. That will test the actual hard drive for errors and spare out any bad blocks. 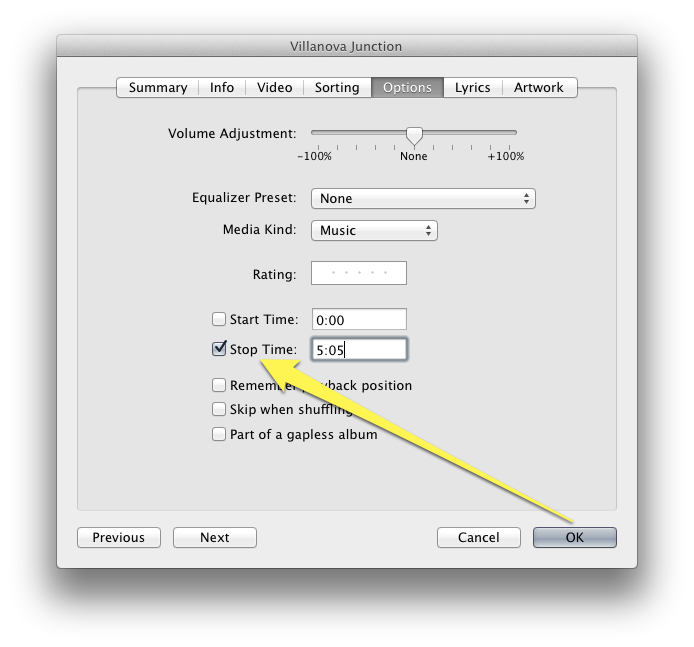 Feel free to edit this or comment if you find none of these helps narrow down the cause.

This happend to me in the past with the same model you have, though I dont think its neccessarly model specific.

The error is coming from a glitch in the music file, try converting the file to AAC and syncing the new file to your iPod, should fix the issue.

I just posted this to the Apple support community, but thought I'd answer here, too:

I think I found a possible answer/solution: apparently the Nano can't handle 256kbps data rate. You need to covert the files from 256kbps to 128bps and the problem should go away. I've had this problem with audiobooks ever since I started getting them from Audible at the higher quality bps. At seemingly random times, the audiobook would pause for a few seconds, then continue. It had the feel of the Nano pausing or cutting off to catch up, so I can believe that this was the problem.

You can convert individual songs or audiobooks by going to Advanced>Create [Format] Version. That will save both versions of the song or audiobook.

Are these by any chance songs you either a) purchased from the iTunes Store, or b) downloaded from iTunes Match? There was a period, a few months ago, when there were lots of downloads from Apple's servers that were truncated. I blogged about it, and got lots of emails from people who had the problem.

I have found a bunch of these songs cut short and I thought maybe because I loaded too many songs at once. I have had a few that I checked on iTunes and they stopped at the same point. I deleted those and reloaded the song to the iPod playlist and that fixed the problem.

Tonight though, I found somewhere the iTunes version wasn't short, just on the iPod. So I resynched and it's fixed a few songs on the iPod, resynched again and fixed some others,... It's a 160GB classic that I got in 2012. I dont have any real answers but here's my experience with it. Frustrating because it seems like random songs to me.

Not the answer you're looking for? Browse other questions tagged ipod mp3 audio .

4
How to fix an iPod Classic with a bad hard drive?
3
Why doesn't my iPod Classic show all the songs it holds?
1
iPod Nano 2G audio started skipping during music playback - what causes this?
2
Where is "search" on the iPod nano 6th gen?
0
iPod Model #1238 will not charge
0
Error code 80070022 and 80070057 when trying to backup music from iPod Classic
0
Can I use an iPod nano 8g as a flash drive for windows, and still use it to play the music I paste in that drive?