How to change default folder/file permissions for file sharing

I have 3 Macs on the network. Each has a Standard User account that is using the Mac.

User A has a folder with files that other user (B & C) can access. When I first copied a bunch of files from a backup HDD to UserA Document Folder, all the files had permission 777. So User B and User C can read, add to, and delete the files & folders

If UserB create a folderPQR in User A's Document folder, the folder permission is set to 744 with respect to UserB. so UserA and UserC can only read the files in folderPQR, but cannot add or delete files in folderPQR. An admin password is needed too. 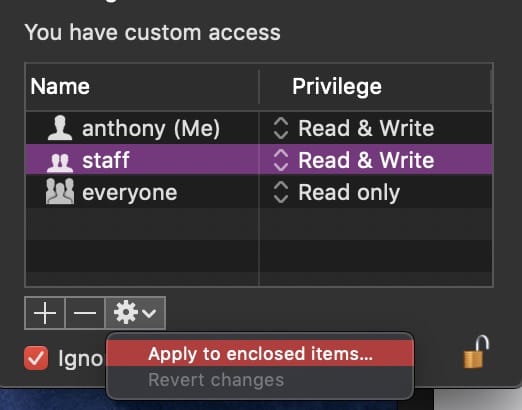 How do I make it such that when any userA,B,C creates a new folder in the UserA Document folder, the permission is set to 777 automatically, rather than stays at the default 744 for the creator.

I have read about umask command which works only when terminal remains open and user-specific launchd configurations command, but would like to source for other advice before proceeding.

8
How to get Finder in Lion to set group permissions to read/write by default?
0
files locked in public folder when sharing via file sharing
1
OS X (Mavericks) file sharing: Can only see contents of shared folder, not open files
0
Cannot add permissions to a file share in File Sharing Preferences
2
How to get correct file permissions from Macports pip installs?
1
El Capitan folder permissions to make admin accounts read-only
0
What's the equivalent terminal command for removing users/groups from a folder recursively?
2
Is there a way to change permission of Desktop Pictures folder?
1
Set permissions for sharing only user through terminal