SSD firmware upgrade requires iso on a pendrive: how to make that bootable?

Goal is updating a NVMe SSD firmware on a Mac without optical drive via USB stick that should contain a minimal Linux, flasher and payload.

The instructions (PDF) for a firmware update utility say to use Unetbootin on MacOS to write an iso-file to a FAT32 formatted (erased) USB stick.

That works. No errors shown.

What then doesn't work is booting a MacBook Pro 2015 from that stick.

The external USB-drive never shows up in the boot menu.

The sticks just aren't recognised on any Mac laptop as 'bootable' once the procedure outlined in the manual is finished. All Laptops can boot from external drives (Thunderbolt & USB) and the boot manager updates without interaction once I plug those in.

Possible reasons : - assuming that DiskUtility from 10.12 and 10.14 can't properly format the sticks? - is latest version of Unetbootin acting up? - is the iso for my device incomplete/damaged?

The last item here may be the culprit:

The firmware iso for a Samsung 970 EVO is just so much smaller than for a EVOplus:

The EVO-iso is mountable directly in macOS and just contains

The EVO-plus-iso is not mountable but when written to stick with Unetbootin it shows an EFI folder and GRUB files, etc… Since this one does boot and scans the computer for eligible devices, I am a bit stuck here.

None of these similar questions on AskDifferent offered a working solution:

Is it possible to make a bootable USB stick for a Macbook Pro to do firmware update?

How to install a bootable ISO onto a single partition of a usb stick?

How to create USB Ubuntu boot disk in OS X so that it boots on *non-Apple* computer?

How to make and use an USB stick with GParted that will boot on a Mac?

How to create a Mac bootable gparted or Parted Magic thumb drive?

Since playing with around with DiskUtilities options it seems to be the case that it is a bit buggy. Switching around between various partitions and filetypes related to FAT/FAT32 results in DiskUtility not recognising its own products, with different options greyed out at different times. Looks to me as if some flag or structural anomaly that DiskUtility introduces keeps this from working, like I might have to really wipe down the stick. Alas, neither wipefs nor gparted did that successfully and I do not know what to look for here.

First find USB key disk number from diskutil list. This method will destroy everything on the disk you copy to so take care. Mine was /dev/disk3 and looked like this:

Make sure no volumes are mounted, then use dd to copy the unmounted ISO file to your device (do not append a partition number, so do not use something like /dev/disk3s2).

This worked for me with the NVMe SSD-970 EVO Firmware ISO 2B2QEXE7 from here. 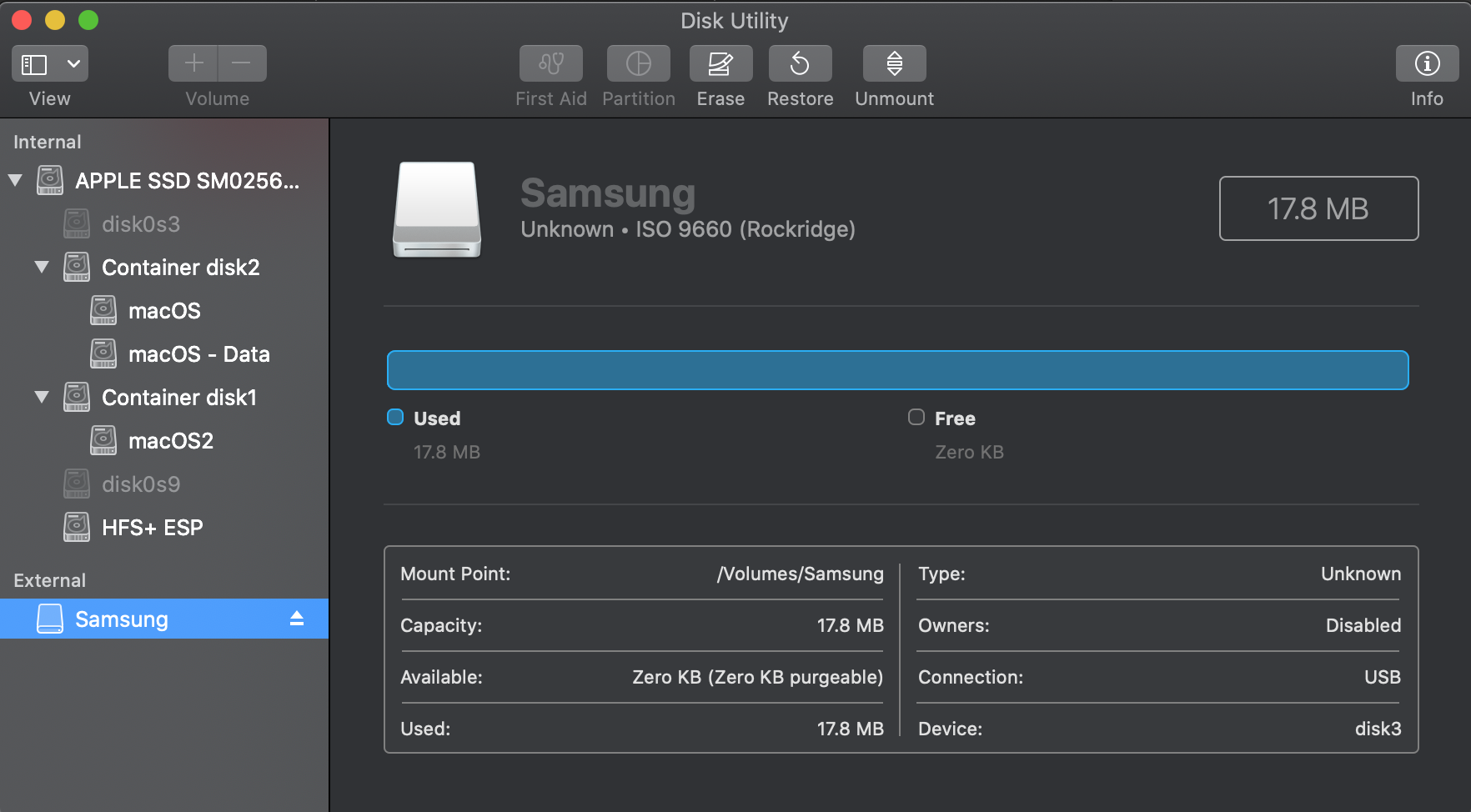 Reboot holding ⌥ and pick the yellow boot option on USB key called "Windows". It should load the firmware utility fine (it did for me on 2015 MBP).

Warning: This will irrevocably destroy all data on /dev/sdx. To restore the USB drive as an empty, usable storage device after using the Arch ISO image, the ISO 9660 filesystem signature needs to be removed by running wipefs --all /dev/sdx as root, before repartitioning and reformatting the USB drive.

As wipefs doesn't exist in macOS, this can be achieved by using gdisk to write a new gpt partition table. Simply reformatting in Disk Utility didn't work to recover use of the USB resulting in lots of "Operation not permitted" errors.

Disclaimer: There is a risk of losing your SSD and the data stored on it when updating to a new firmware!

Here are the steps:

Remark 1: It seems possible to update from an OS running on the target SSD and I saw YouTube videos showing the SSD Magician tool on Windows doing such hot updates, i.e. on a SSD being used. But I am not entirely sure whether this is safe. The issue is that the OS will write to the SSD after the update procedure but before the restart. There is a risk that the SSD does not handle correctly those writes, hence losing data.

Remark 2: If UNetbootin is used to create a bootable USB stick from the ISO then the USB stick needs to be formatted with MBR and FAT32; GPT and/or ext4 did not work for me. There is a bug in the ISO image provided by Samsung with AMD based systems. USB and more specifically USB keyboards and mice will not work; since most modern mainboards do not have PS/2 ports anymore navigating through the SSD Magician prompts is virtually impossible on AMD based systems (source).

Not the answer you're looking for? Browse other questions tagged macbook-pro usb boot .

10
How to make and use an USB stick with GParted that will boot on a Mac?
7
Copy Crucial SSD Firmware Update ISO to Bootable USB
5
How to create a Mac bootable gparted or Parted Magic thumb drive?
4
How to create USB Ubuntu boot disk in OS X so that it boots on *non-Apple* computer?
2
How to install a bootable ISO onto a single partition of a usb stick?
0
Is it possible to make a bootable USB stick for a Macbook Pro to do firmware update?