I am having issues with macOS where, after mounting a drive it will mount new drives instead of just jumping to the sub-folder path within the mounted drive.

If I create a new sub-folder within "GoPro - IMPORT" and send them a link to that like (smb://HAL9000/Video/GoPro%20-%20IMPORT/Test), instead of taking to the sub-folder in the "Video" drive that they already have mounted on their desktop, it will create an entirely new drive labeled "Test" on their desktop.

I've tried reaching out to both Apple and Synology and had no luck with this. I would appreciate any kind of help/support.

Unfortunately, this is not how macOS works.

SMB or Server Message Block is a Microsoft Windows technology so it stands to reason that sharing links to SMB shares (or as Microsoft calls them, network shares) is baked into the OS. The UNC share isn't "mounted" like it is in Unix where "everything's a file". In Windows, you can "map" a network drive to a share, but in Unix, you have to mount it.

When Finder "sees" the smb:// it invokes the mount_smbfs command behind the scenes and creates a mount point in the /Volumes/ sub-folder. Using your example, the first time you send the link smb://HAL9000/Video, it will issue the following command:

If that name exists, you will get the following path /Volumes/Video(1) and if that exists, (2) and so on. Using my SMB mounts on a Synology Diskstation, as another example, I have the share "Network Share" already mounted. When I try to mount again using "Connect to Server" (⌘ CommandK and just connecting directly to the server with no share specified, you can see that it's greyed out. 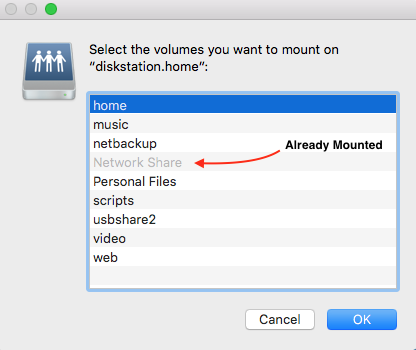 That's because it's already mounted. Issuing the mount command gives us:

The last line confirms it - "Network Share" is already mounted and can't be mounted again.

The problem with that is /Volumes/Share-name may be completely different for you and me (see above re: existing names). The only thing you can do is to rewrite the UNC path to let Mac users know which file you're referring to. Example:

The user will then have to manually navigate to that share to get to the file you're referencing.

This is why they created WebDav because now you'll be accessing the file via a universal https:// link which is the same for everyone. The downside is that if you intend to share with Windows clients, you'll need to implement SSL certificates. And yes, Synology does support WebDav

Not the answer you're looking for? Browse other questions tagged macos mount smb .

0
How do I publish symlinks as regular files over SMB3?
2
Windows mklink links and Mac

6
Permanently mapping a network drive on MacBook Pro?
4
SMB: auto-unmount then unable to re-mount without restart
4
Transferring Emails saved on Mac to generic folder
4
Terminal (bash) - copy files from Windows (SMB) shares without mounting
1
Need to automate an SMB path into a UNC path before sending to Win10 clients
1
Backup workflow from macOS to NAS?