How to stop mDNSResponder from using 90-100% CPU continuously forever on Catalina?

One of the first things I did after the upgrade was edit a video using the new free trial of Final Cut Pro X. My laptop's cooling fans ran full-speed the entire time, but there was always background rendering going on, so I figured that was normal.

When I finished and quit FCP, the fans didn't spin down, so I checked Activity Monitor and discovered that mDNSResponder is taking 90-100% CPU continuously. The Threads column in Activity Monitor indicates 3-4 threads most of the time; the 100% is spread across all of those, and they're not all on the same core. I'm not sure how it's managing to do that and still sit at or just under 100% most of the time, but that's what it's doing. 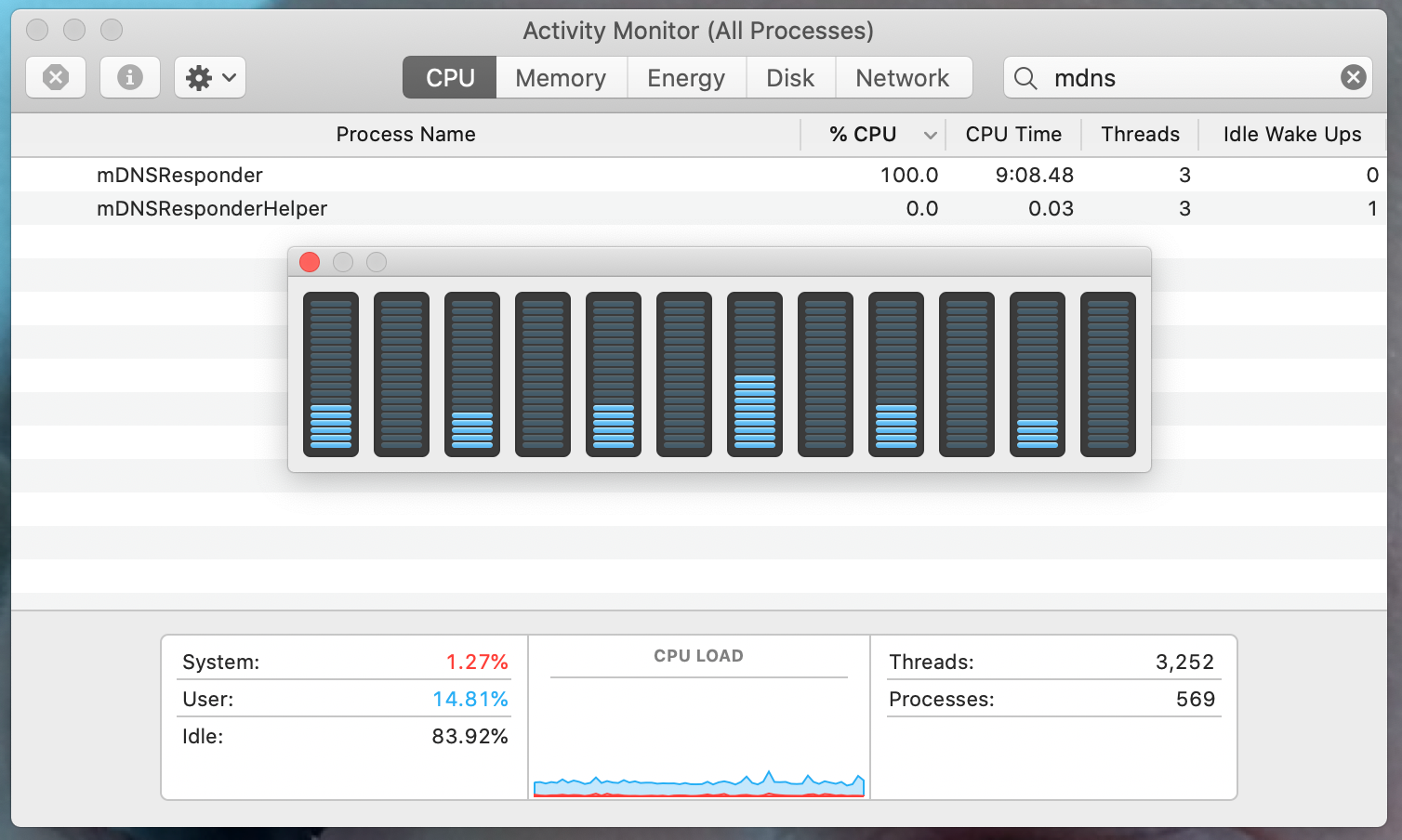 The laptop has six cores (12 logical), so having one core fully occupied does not make a noticeable difference in performance (unless I start measuring how long things take -- but that's noticing that the numbers are different — not that the performance is different!).

Note: In the aggregate, the bar graphs show more than one full core being utilized. This is expected. I have a search applied in my Activity Monitor screenshot, and there's lots of other stuff going on -- Slack is open, Chrome with eleventybillion tabs, IntelliJ IDEA is probably indexing something, and so on.

I watched the process disappear, so I know the command worked, but it immediately returned to 100% CPU usage when I started it back up. mDNSResponderHelper did not stop, so I tried again, inserting sudo killall mDNSResponderHelper as an intermediate step. This made both processes go away as I intended, but still didn't fix the problem.

I also tried sending a HUP signal to mDNSResponder as follows:

This also had no effect.

I opened up Console, entered mdnsresponder in the search field, and watched the messages flow by for a minute or two. Some stuff about Bonjour, LOTS of <private>, and some pretty normal-looking DNS query logging. I tried disabling both Bluetooth and Wifi in hopes of affecting Bonjour, but I'm on a hardwired Ethernet connection (which I did not disconnect) and it did not seem to have any effect.

After typing this, I eventually noticed that cloudphotosd was also taking up a healthy chunk of CPU. I assumed that this was the notorious reindexing process that frequently happens after OS upgrades, going through my (quite large) photo library, updating metadata based on whatever new features came with Catalina, and uploading those changes to iCloud. That would explain some constant network activity, and so I thought maybe that would explain mDNSResponder's activity. So I left this window open without submitting and waited a while to see if cloudphotosd would calm down. It did, but mDNSResponder did not. So much for that hunch!

Finally, I tried rebooting my Mac; mDNSResponder wasted no time getting back to business. With no apps running after a fresh boot, it was already consistently sitting at or just under 100%, just like before.

This is a Q&A site, and I haven't asked a question, so here goes: how do I figure out what it is doing, and how do I make it stop?

UPDATE: it's been nearly 48 hours and it's still churning away. My battery life sucks now. I've observed that closing the laptop lid does seem to make it stop, but it comes right back when I open it again. I've also noticed an additional symptom: first-time DNS lookups after a reboot take ~2 seconds (I'd expect <200ms). I'm not sure if that's simply a side effect of mDNSResponder being so busy doing whatever it's doing or if it is related to the cause.

UPDATE 2: it's been more than three weeks. I've added a 100-rep bounty. The DNS lookup delay has increased; it often takes 20-30 seconds, and while there does seem to be some caching in place, I think it has a time-based expiry on it, because the delay reoccurs later without a restart. I'm happy to interact directly with someone knowledgeable enough to debug and diagnose this issue. I'm on Eastern Daylight Time in the United States (UTC-4) and generally available during business hours.

EDIT: I was able to re-create the issue and capture the related network traffic. Many section of RFC 6762 (Multicast DNS) seem relevant - I won't post excerpts here, but specifically I found parts of sections 3, 5, 5.2 and 10.2, to be highly relevant.

Here's what I think is happening.

Upon creating these lo0 aliases, traffic is constantly generated with a "cache flush" flag. The RFC doesn't get into enough detail about it for me to be sure, but it seems like each of the loopback addresses are advertising themselves as being the address that can respond to queries made to the hostname of the machine, and therefore listening devices should flush their internal caches and update them with the new IP address.

What doesn't make a ton of sense to me, is there are parts of the RFC that have me think multiple active loopback addresses on the same machine wouldn't be spamming the way they are - but then I may not be understanding the RFC well. Either way, it seems clear to me that the mDNSResponder process is looping through each loopback interface and telling everyone on 224.0.0.251 to disregard the last guy who took charge, this is the new IP address assigned to my hostname!

I'm not exactly clear on why this slows down regular DNS queries, except if mDNSResponder is responsible for sending out and receiving the regular DNS queries, well, it's tied up in all this nonsense with the other interfaces. And/or, perhaps the DNS queries would go out and come back in on whichever interface has most recently taken charge of the hostname. That, I could see really causing delays, because in the time a DNS request over WAN comes back, the responding loopback interface would be different than the one it went out from. But I'm just spitballing wildly at this point.

This can be a lot of things, but all involving remote/sharing via the internet.

Do you have Screen Sharing, Remote Login, Remote Management, Bluetooth Sharing, or even Bonjour activated?

One of these things could be generating all of these DNS traffic.

On the other hand, this can be a Malware. Try to clean all your DNS cache and change it to 0.0.0.0

Not the answer you're looking for? Browse other questions tagged macos catalina cpu dns .

0
Finder is using over 100% of CPU and makes entire system slow
5
How to fix when I can nslookup and dig an internal hostname, but I cannot ping or ssh to the internal machine?
6
How long can my MacBook Pro sustain greater than 100% CPU usage?
0
OSX Yosemite DNS cache Issues
0
How to stop kernel_task from constantly using over 400% CPU?
4
chmod using 100% CPU resources
2
How to or Is that possible to stop mDNSResponder without disable System Integrity Protection?
1
What is `tic` and what can I do about it using 100% CPU?
16
VS Code - Code Helper process using more than 100% CPU on macOS
1
Mystery IP cache problem one macbook all accounts all browsers