How to boot into High Sierra from Windows without holding the alt key?

I'm running Sierra on a Mac pro 5.1 and Windows on a second SSD. So far I'm using a non EFI graphic card and I can just switch between systems through startup disk on mac/Boot Camp menu on Windows.

The point is I would like to upgrade to High Sierra but as far as I've been reading I won't be able to boot into macOS from Boot Camp menu.

Anyone knows some workaround for that?

I am pretty sure that you should be able to switch between Windows 10 and macOS through the BootCamp-Utility under Windows. I am running a Mac Pro 5.1 with macOS Catalina(APFS Partition) on my NVMe Drive and Windows 10 on a SATA-SSD and I always switch between Windows and macOS either via 'Startup Disk' under macOS, or use the BootCamp Utility under Windows.

I recommend you looking at this Guide from Crystalidea. There are detailed instructions on installing Windows 10 on a Mac Pro 4.1/5.1 and they also show you how to switch between the operating systems even if you don't have an EFI-compatible GPU. With never versions of macOS (particularly when using APFS) it is recommended to install the iMacPro1,1 bootcamp drivers in addition to the MacPro4.1's/5,1's. Download them via brigadier and after installing you should be able to switch between macOS and Windows.

A personal recommandation is to modify the BootCamp drivers with InstEd It!.

Modification via InstEd It!

You should now be able to install the drivers with the incompatibility error. Do that both for the 4.1/5.1 Mac Pro and iMacPro1,1 bootcamp drivers and you should be good to go.

I am not sure how having a non EFI graphics card effects choosing the startup disk from BootCamp installed in Windows. This answer is based on the assumption there would be no effect.

Older versions of Boot Camp can not detect APFS volumes. This problem may solved by using Apple Software Update to download and install a newer version of the Boot Camp Software. However, your Mac is probably to old for this to occur.

If Sierra is installed on a HDD, then an upgrade to High Sierra should result in no conversion to APFS. In this case, the Boot Camp software installed in Windows should be able to make High Sierra the startup disk, just as it now does in Sierra.

However, a conversion to APFS should occur, if Sierra is installed on a SSD. If High Sierra ends up booting from a APFS container, then an alternative would be to create a small (200 MB) jhfs+ formatting volume containing the rEFInd Boot Manager. You can configure rEFInd to silently boot High Sierra. BootCamp installed in Windows will detect this volume with rEFInd as macOS. If set by Boot Camp as the startup disk, then rEFInd will instruct the firmware to boot High Sierra. You need to properly configure the refind.conf file for this to happen.

rEFInd can also be configured to boot other operating systems. However, to choose the default, you will not be able to use Boot Camp. Instead a script can be installed in Windows which will instruct rEFInd which is the startup disk. An example of the execution of one such script is shown below. 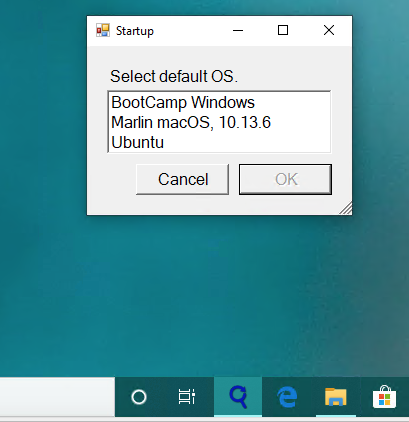 Not the answer you're looking for? Browse other questions tagged macos bootcamp high-sierra dual-boot .