Basically, my superdrive is either dead, or dieing. I put a disc in it recently, and it failed to do anything other than make odd noises then eject it. Then on certain discs it would make an awful grinding noise repeatedly like a circular saw, then eject the disc (no apparent damage to it). Then it took a disc in, buzzed a bit, and the drive just dissappeared, even system report couldn't see the hardware, never mind the disc inside.

I reboot holding option down allowed me to software eject, and since then I can repeat the above behaviour until the system seemingly abandons it.

Frankly, I always thought it was a bit dodgy (I bought it 2nd hand), as it was really SLOW to install the OS from and rip CDs etc compared to a cheap USB one I have.

So, the question is, how do I replace it, and what should I replace it with? I'm happy to use a non apple part, so long as I can still use it in the same way without it complaining about being incompatible in iMovie/iDVD etc.

I know I can go external, and indeed have 2 external drives, but I don't like the clutter, and it seems that DVD player won't touch them anyway: 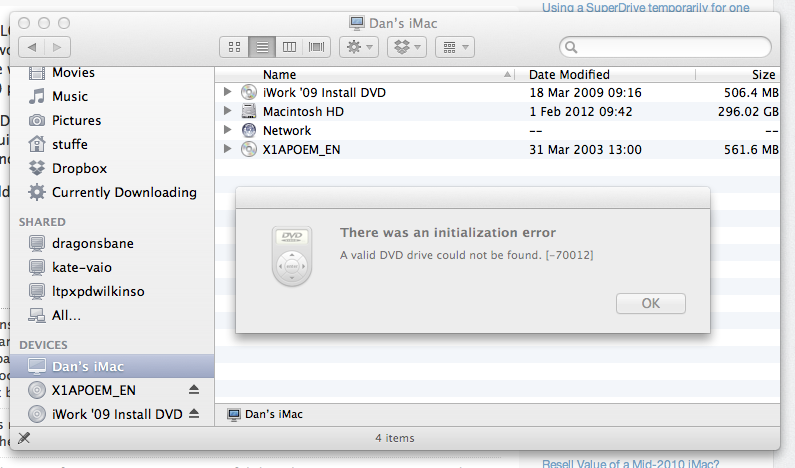 Getting the glass and LCD panel off without snapping cables is tougher than you may think, my recommendation would be to have it repaired by a professional. I'm not sure how much prices vary around the world but we would charge around £90 for the part and £40 for labour (if it's an optical drive) plus taxes. As things go, it's not an expensive repair.

If you're hell-bent on DIY then I'm sure there are places out there you can get parts and manuals/take apart guides. It may end up more expensive if you damage anything yourself, and of course there's no warranty on the repair!

The other option would be to use an external drive. There are loads of options out there at varying price points.

IMHO best (well cheapest if you already have another networked PC with an optical drive) Superdrive replacement is remote disk hack. In Terminal

And then read this instruction from apple.

Not the answer you're looking for? Browse other questions tagged imac optical-drive .

0
Making Apple USB SuperDrive work with other Apple Hardware
2
MacBook Pro CD burning is not permanent
0
USB SuperDrive Issue
0
Burning Folder to DVD
1
Replace an iMac superdrive with one pulled from a Macbook Pro?
0
Force CD ejection from SuperDrive
0
SuperDrive does not accept or read discs. Tried everything. Are they just horrible quality?