Why is my MacBook Air faster than my iMac?

I run similar programs on both, some of which you would think would slow down the laptop, yet the laptop always seems to outperform the iMac. The iMac has been incredibly slow lately with Safari being especially painful at times. I thought maybe it was b/c some of my programs probably require a better machine than I have but then those same programs perform great/much faster on the laptop (which I'm sure does not have the min. specs for them).

The iMac is incredibly slow especially with opening just about everything from Mail, Photoshop to Safari (yet Firefox opens right up). The heavier program I run on both my machines is called Archicad v. 23. Archicad is much faster to open on the laptop.

I'm adding a link to some screenshots from the laptop and iMac to compare and screenshots of the current Activity Monitor from the iMac which I just restarted (it would only let me upload two images here so I added the link instead).

UPDATE 3/14: These screenshots here are from the iMac - not sure which are best to post i.e. CPU or Memory, etc. it only allows two images. Also should point out the iMac can run a little better once everything has been loaded and it's been sitting for an hour or two...but the start of programs and getting it running at normal speed after a restart takes a long time. 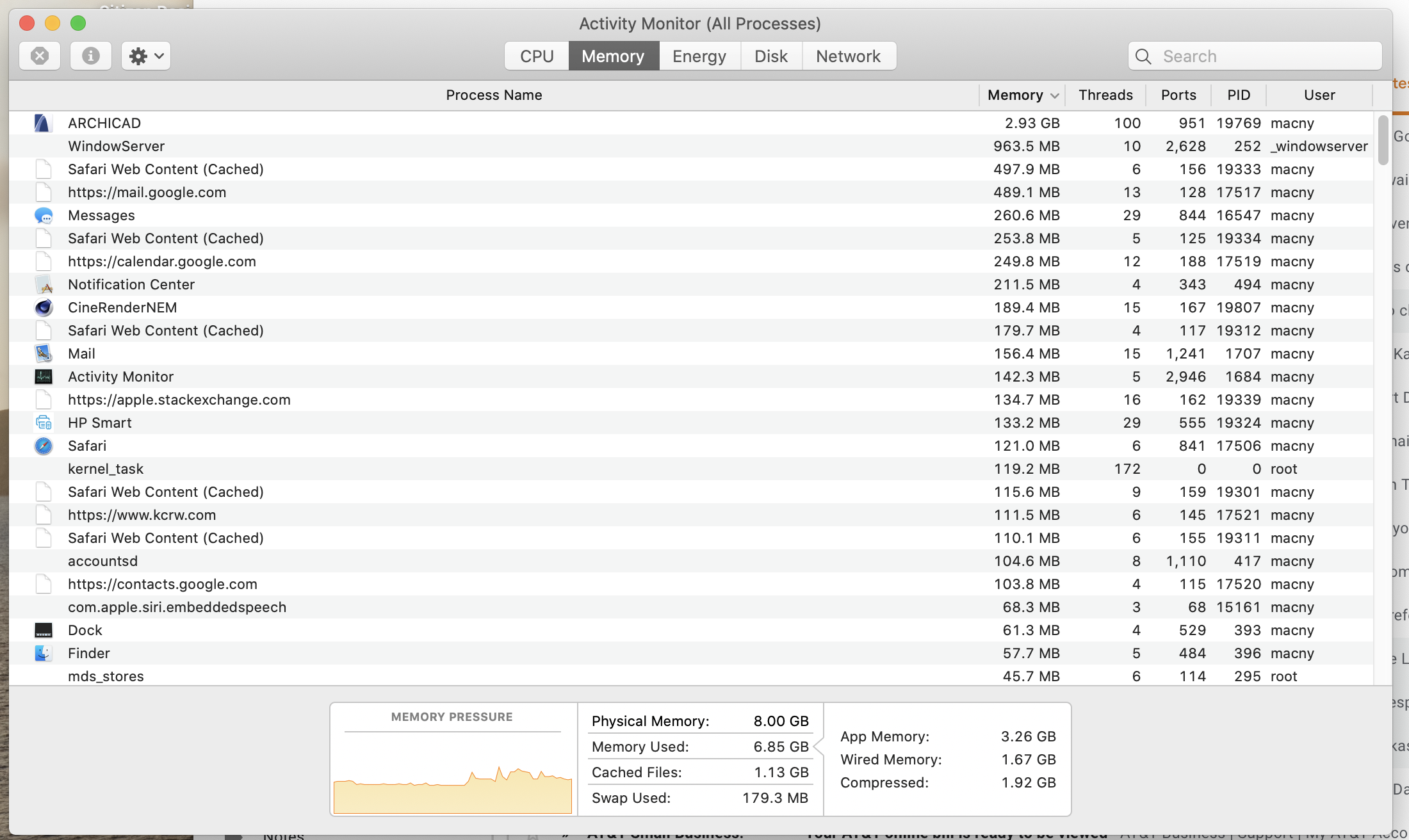 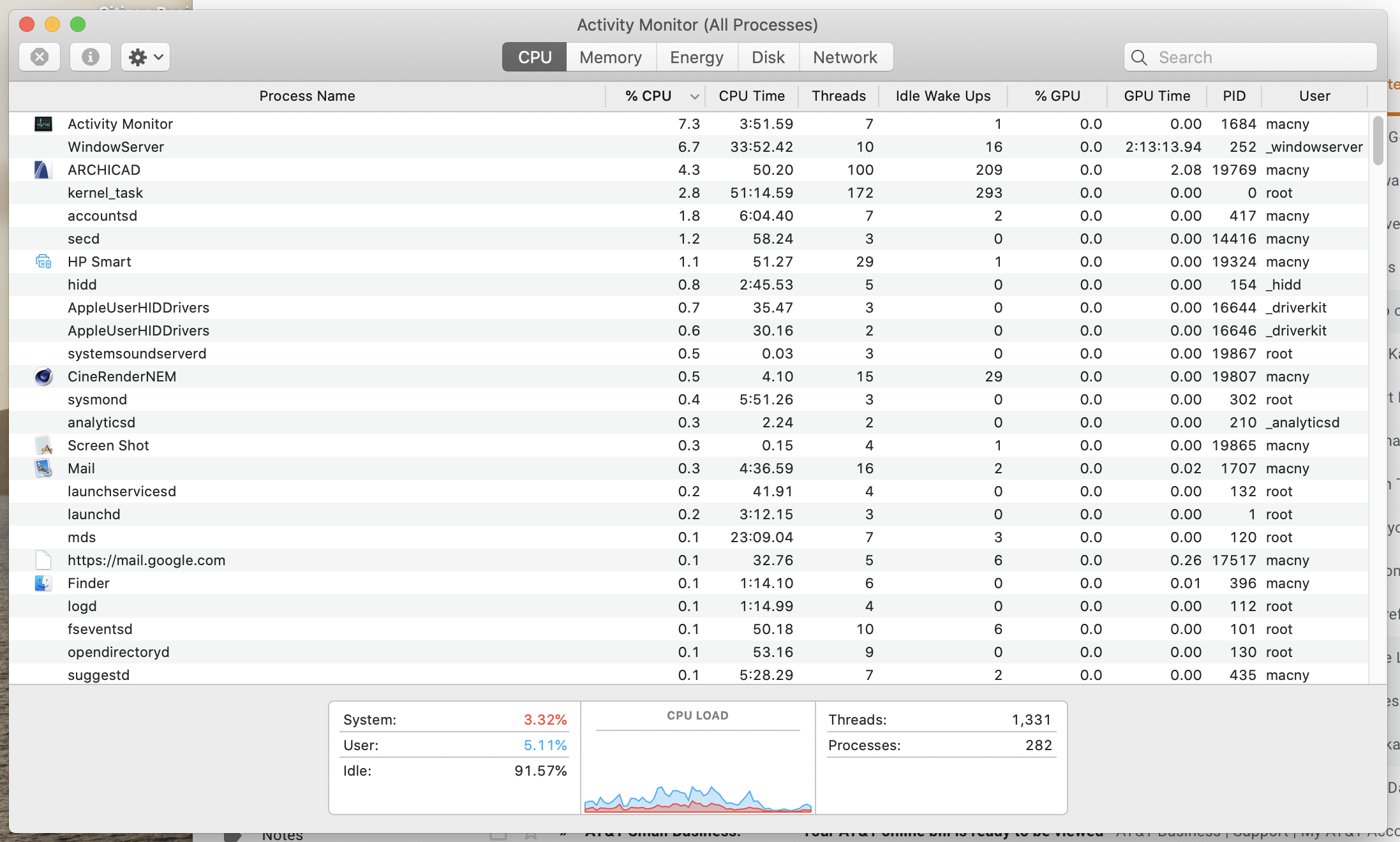 One main difference between the two computers is that your MacBook Air has an SSD - a solid state drive - for data storage, whereas the iMac has an ordinary hard drive. SSDs are typically an order of magnitude faster than hard drives, so if your usage of the computer involves a lot of disk usage, that could explain the perceived speed difference.

Another difference is the processor. Here the iMac has the advantage with a CPU that potentially is up to about 3 times faster than the CPU in the MacBook Air. However, if your specific usage of the computer does not involve a lot of heavy CPU usage, or your programs are not written to take advantage of multiple CPU cores, then that advantage could possible be minor.

Even considering these differences between the two computers, you shouldn't have a "painfully slow" experience on the iMac. If it was quick, and now is painfully slow, it doesn't sound like the hardware is just insufficient for the task. It sounds more like a software problem or possible a hardware defect.

I would suggest testing the software hypothesis by installing macOS on an external USB drive and see if that improves performance - or if you have no problem rolling your computer back to an earlier date, then by restoring an earlier Time Machine backup from before you've experienced the slow downs.

In terms of a hardware defect, you could suspect something like a cooling problem. If that were the case, you would probably hear increased fan noise, and/or you would see kernel_task as having a high CPU percentage in Activity Monitor, which the screenshots does not show. Therefore it doesn't seem that a hardware problem is likely just now. You could check your logs (using Console.app) to see if you have any error messages about your disk drive - timeouts here could give massive slow downs throughout the system.

Your update definitely suggests it's the hard drive. When you first boot your computer, it has to read all of the data from the SSD (MacBook) or HDD (iMac). Some of that data is then kept in RAM, so operations depending on that data become faster after they're first run.

Even with a perfectly healthy HDD and SSD, reading data from an SSD will be faster. It won't be as fast as RAM, but you'll definitely notice the difference vs a conventional HDD.

However, an HDD shouldn't be as slow as you're describing. In general, the first thing you want to blame for slowdowns is the operating system and installed apps. Factory resetting usually helps. But since you say it's only really slow after boot, and gets better from there, I feel pretty confident saying the hard drive is on its way out.

Anecdotally, I've run into two iMacs that have gotten slower over the years. One was a 2010 iMac and the other is a late-2013 model. (I never actually did any diagnosis on the 2010, but its situation was similar to the 2013's.) Using Disk Utility to repair the filesystem, checking SMART status, and doing some other tests, all told me the drive was healthy. I brought it to a repair shop and had the drive replaced and it's noticeably faster. It's the same data and same software (simple drive clone). The only difference was the drive.

My suggestion is to call around to your local repair shops and see what they charge to replace your hard drive. The iMac is incredibly frustrating to take apart, and it's really easy to accidentally sever a wire when removing the screen. If repair shops are too expensive, and you're confident in your repairing skills, iFixit has a whole bunch of guides. Otherwise, your best bet is probably buying an external Thunderbolt 2.0 drive and installing macOS to It.

"The iMac is incredibly slow especially with opening just about everything […]. Archicad is much faster to open on the laptop."

"Also should point out the iMac can run a little better once everything has been loaded and it's been sitting for an hour or two...but the start of programs and getting it running at normal speed after a restart takes a long time."

Those quotes definitely point to a slow hard disk being the problem.

When you launch a new program, the computer needs to load it (and any data files it needs) from the disk into memory, and the time it takes to do this mostly depends on the read throughput (and, to a lesser degree, on the latency) of the disk. This is one area in which SSDs shine, often being anywhere from 2 up to 10 times faster than traditional hard disks depending on the workload and the specific drives in question.

Similarly, when you restart your computer, the OS itself needs to load itself (and any automatically loaded system software, as well as any programs you've selected to be automatically loaded at startup) from the disk. MacOS tries to do some of this loading in the background, so that you can start using the system even before everything has been fully loaded, but things will be slow while it's happening — especially if your disk is slow and overloaded with work.

(As for Firefox starting up fast, I suspect you may have it configured to "Open at Login" on your iMac so that its startup time gets swallowed up in the general OS startup time. You can check this by right-clicking the Firefox icon in the Dock and looking under "Options". Or maybe it's just fast to start up in general.)

Apparently, replacing the HD on your iMac with an SSD is technically possible, but it requires temporarily removing the display, which takes special tools and risks damaging the screen if you're not careful. If you don't already have experience with this kind of repairs, it might be a better idea to either get a professional to do the replacement for you or, as other answers have suggested, get an external USB 3.0+ and/or Thunderbolt 2 SSD and reinstalling macOS (and at least your most commonly used applications) onto it.

I just wanted to give an update and say I finally got around to getting an external SSD drive as was suggested on here. I loaded my operating system onto it and WOW what an improvement from before. I don't know if my computer has ever ran this fast, it changed everything and definitely seems to have worked. I bought the one Apple had on it's site, this one here: https://www.lacie.com/products/mobile-ssd/. It's only been a few days but I wanted to say THANK YOU for the help and advice on here, very much appreciated!

PS: For anyone else who attempts this one tip I have is to make "a bootable USB" of your operating system first. That will help a lot later on when you go through the steps to do it.

Not the answer you're looking for? Browse other questions tagged performance .