I want to install Windows 10 on External SSD and then be able to move it between 2 Macs, is that possible?

I have two newish Macs: a 2018 Mac Mini and a 2017 MacBook Pro, both running Catalina. I have purchased a 500GB SanDisk Extremest Pro (supposed read/write of 10GBs/s) to install Windows 10 from Bootcamp on. I haven't done this part yet but we'll see, it doesn't seem as easy as it should be.

Anyway, I would like to be able to move the Windows-installed SSD between the two computers freely and then be able to boot into it on wither machine. IS that possible? I would think that I'd just have to have and install the drivers from Bootcamp Assistant on each machine into that one Windows OS but really I have no idea. Would windows know which drivers to use dependent on which machine it's connected too?

Any help or insight on either process (install Win10 on SSD and Use SSD on Two Macs) is GREATLY appreciated.

(FWIW I'm trying to set up virtual reality gaming via Oculus Link on either computer, along with a Razer Core eGPU running an AMD Radeon 580. Installing the driver for that GPU is a whole different issue I'll be tackling after this one.)

While technically possible, it would be exceedingly cumbersome because each time you booted, Windows would consider itself to be running on new hardware and require a new activation and new device driver installations. See https://support.microsoft.com/en-us/help/20530/windows-10-reactivating-after-hardware-change.

A better option is virtualization. You can run vmware, parallels, or the free https://www.virtualbox.org, installed on each of your macs, and keep the virtualmachine file on the external drive.

Yes it is certainly possible - I do it and have no issue with either drivers or activation. The external install works on all my Macs with the exception of a 2006 MacbookPro2,1 which will not boot anything apart from OS X from an external drive.

You don't need to do anything special - once you have a bootable drive just plug it into another Mac/PC and it will generally work - Windows is very forgiving about hardware when it comes to booting these days.

Note that Windows 10 activation is tied to the Mac/PC hardware that you boot it from not the installation on the external disk. All my Macs have digital licenses for Windows so my external Windows activates whichever I boot it on. If you boot on a Mac/PC without a digital license for that edition of Windows then it will run un-activated until you either buy a license or boot from a Mac/PC with a license.

This question isn't really Mac specific but the first step is to install Windows to the external drive as normal. There are many methods and guides to do this. I did it manually as I already had other OSs on my external drive and I find it quicker.

Next Windows was applied from the ISO to the NTFS partition using DISM and the Windows bootloader to (external drive) EFI partition using bcdboot. This was done from Windows running on my internal Boot Camp partition. The Microsoft steps for doing this are here or you can look at this tutorial. You may then want to apply Boot Camp drivers at this point as your Macs are recent but I installed them after first boot.

If you don't have a Boot Camp partition you could use a separate Windows PC to do it or install Windows on VirtualBox, mount the external disk as a raw disk and then apply from there or use some other method as described in the links above.

Once you've installed Windows to your external drive (however you did it) you can then boot from it.

If you installed Windows 10 the activation is normally stored as a digital license tied to the hardware - it is not tied to the installation. Therefore if your Boot Camp partition has a valid license then the first time you boot from Windows on your external drive it will activate as soon as you connect to internet. If your Mac doesn't have a license then it will run un-activated indefinitely with some limitations. This is exactly the same way as activation works when dual booting on any PC. 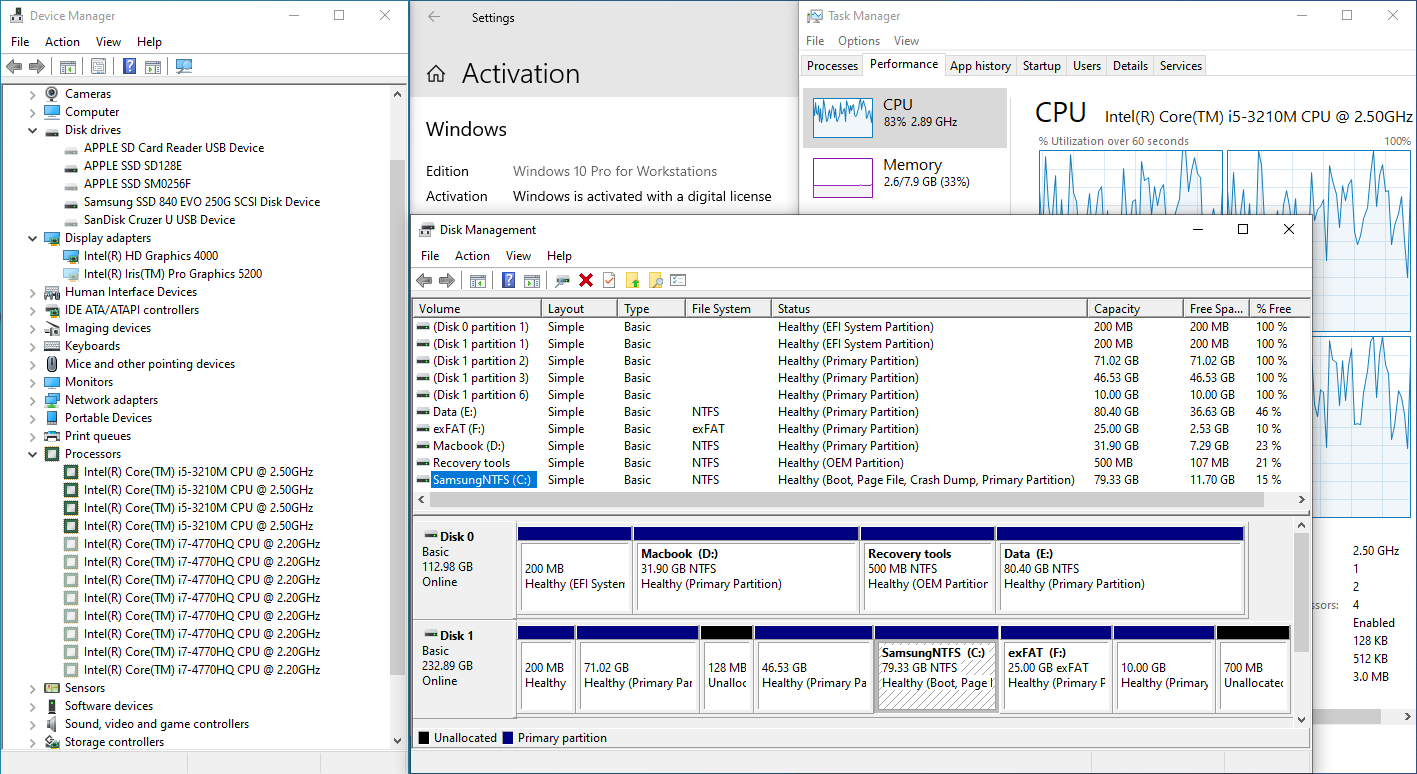 If you want to boot from another Mac just hold option and pick EFI boot on the external drive.

When booting a different Mac/PC you'll see a message "Getting devices ready.." during boot but this takes only a few seconds and you don't need to manually install drivers - it is automatic. This is the same Windows instance running on another Mac - you can see the drivers used in the previous boot (CPU/graphics etc) are still there just not active. 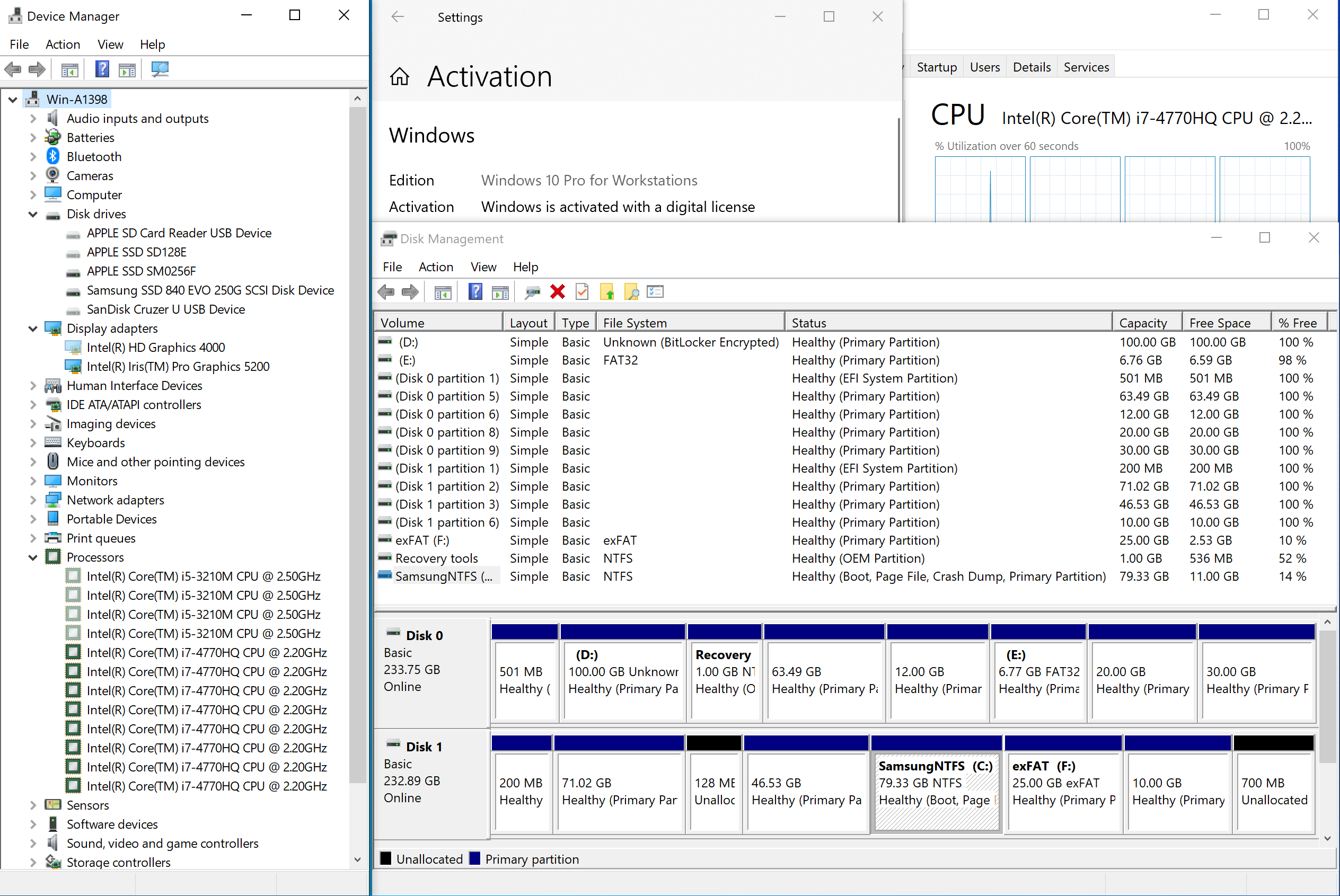 If the second Mac has a valid digital license then 90% of the time it will activate automatically after a minute or two. If it doesn't (for me about 10% of the time I swap it doesn't) you'll see this message: 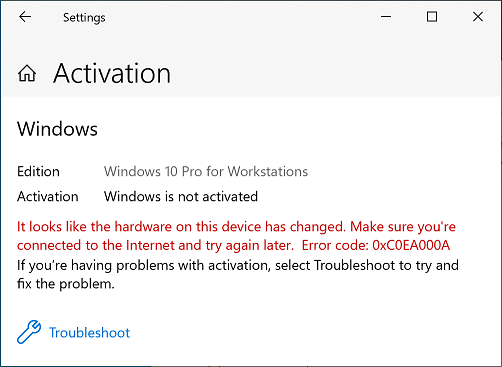 If you click on "Troubleshoot" and the hardware you are booting on has a valid digital license it will then activate.

Not the answer you're looking for? Browse other questions tagged bootcamp windows .

7
How to do raw device access with VirtualBox?
2
How to instal Window 10 on an External drive for a MacBook Pro 2019
0
Bootcamp HDD is now in a USB3 external enclosure. Can I boot my iMac from it?