Can I attach a .dmg without mounting the drive that it is sitting in?

I have a .dmg sitting on an external drive (which also contains other data).

The .dmg is an image of a failed drive so I can't mount it but I want to attach the .dmg without mounting the partition it is in.

I ask because, if I mount the partition, attach the .dmg and then try to run TestDisk, TestDisk returns this message:

I tried what I thought would work: hdiutil attach /dev/disk2s2/cfp/disk0s2-clone.dmg it didn't, attach failed - Not a Directory

I guess a different way of asking my question is, "How can I use TestDisk on a .dmg if I can't mount the partition that the .dmg is in?"

If you mount a drive one of the things which happens is that the file system type gets identified so macOS afterwards knows how to access the content of the drive (and find the DMG for instance). So operating systems can't access files on a drive without mounting it first.

The reason testdisk fails is because it needs to write to the device, but your dmg is probably stored in read-only format, so it is not able to write to the virtual device that represents the dmg.

To solve this, you can either "restore" the dmg to an actual physical drive then run testdisk on it, or you can mount this dmg as read-write using a shadow file. See man hdiutil for more details.

Running hdiutil attach -nomount -verbose ~/Downloads/test.dmg will attach the disk but not mount it. Here is the view from Disk Utility after running the command. 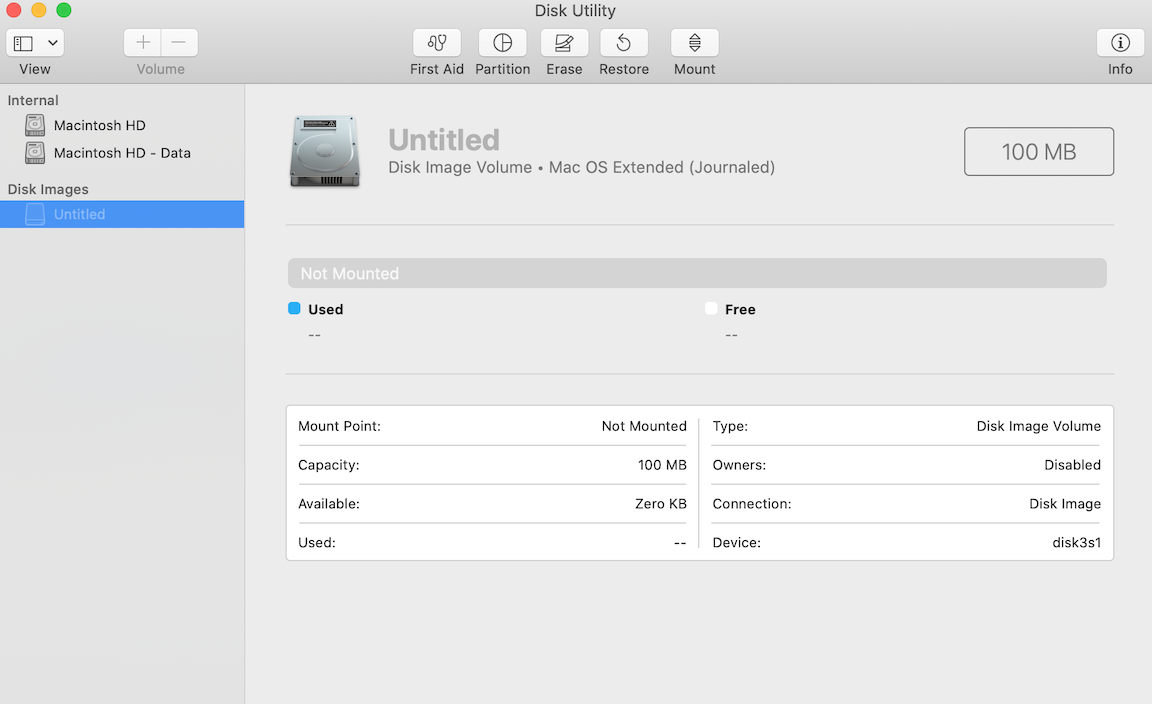 Not the answer you're looking for? Browse other questions tagged terminal mount dmg hdiutil .

24
Why are so many Mac downloads a .dmg just that contains a single .pkg?
3
Creating a Backup of a Mac hard drive that won't boot?
2
Prevent internal drive from mounting automatically
3
Convert a plain disk "legacy image" so that it can be mounted
19
Force mounting an external disk that is not recognized
2
What is the correct way to eject a APFS dmg from the command line?
1
I accidentally unmounted the External Hard Drive and now I want to re-mount it back