Mail in OS X 10.7 (Lion) doesn't allow me to set a default font for outgoing messages, and it's finicky when I change it in the message.

When I show the font bar (by clicking the A button at the top right of the message window), the font bar doesn't retain its value if I set it before typing any text. If I change it and then start typing, it changes to what I set it as, but if I delete all my text then it reverts to default (Helvetica).

How do I get around this? Is there a plugin to solve this, is it considered a bug...? I found the Universal Mailer plugin, which is now open source.

You should be able to do this by going to Mail Preferences > Fonts & Colors and selecting the following option: 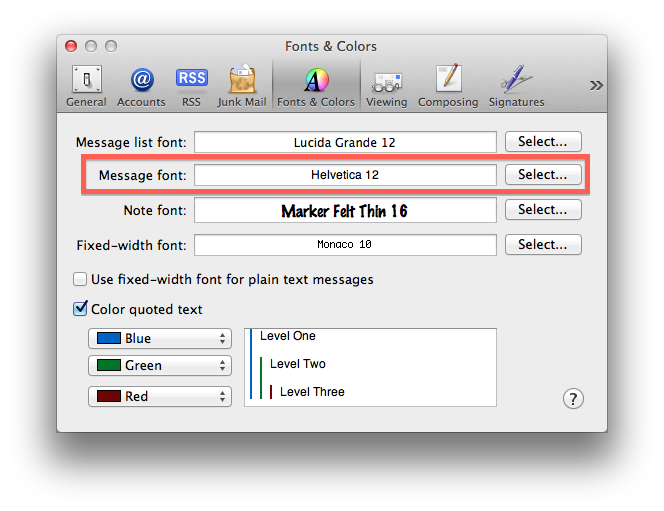 Mail has lacked the ability to set a default outgoing font via its Preferences since at least 10.4. Users who really need this, often switch to Outlook/Entourage or Thunderbird. There are also some plugins, such as Universal Mailer or Message Font that can do this.

Unfortunately Matt Love has it wrong. I was pulling my hair out because of this issue, particularly when sending to people who use Outlook. I did some digging, and if you take a look at the message source you'll notice that Mail does not use the font-family tags around the body text. Therefore, the Mail client will default the body text to whatever it's default is. In the case of Outlook, it's Times New Roman. Beyond that, it's particularly frustrating if you've created a signature and clicked the "Always match my default font", because in that case Mail will wrap the signature with size and font-family, but the body text will look totally different. Worse, in some cases where text is wrapped to indicate font size, it's using the relative CSS term "medium", which can produce strange results. Also, since no font-size for the body text is declared, in Outlook it ends up larger than my signature which is set at 14px, but when viewing through Gmail in a browser, the body is smaller than the sig.

You can also poke around with the actual signature files to get a feel for what's going on:

I stripped the font-family declarations (so at least if it does end up as the mail client's default all the text is the same font) and made sure every font-size declaration was in px, and it's somewhat consistent now other than the difference between sig and body.

In my opinion this is a bug; maybe we should all go file it as such through Apple to get their attention. In the meantime, Tom Gewecke's suggestions might be the only solution.

Update: I tried Universal Mailer and as the commenter above describes it works perfectly. You have to pay $4 to get the full version otherwise you get additional text put on the bottom of every email.

Update: It looks like Apple has fixed this is OS X Mavericks. I've done some basic testing and it seems far more consistent now.

Not the answer you're looking for? Browse other questions tagged macos mail.app font .

4
Apple mail sending "Untitled attachment #####.htm" to outlook along with other attachments

9
Composing messages in Apple Mail: Displaying text on screen in larger size without changing font size
1
10.7: managing SMTP (outgoing) server for multiple POP email accounts on the same mail server
3
Can the default font size for "Email this Page" text be changed in Mountain Lion?
23
How to Change default fallback font (for non-latin languages)
7
Why does the font change after I paste an image in TextEdit?
3
How can I set a consistent font for sent messages in Apple Mail Mojave?
1
Is it possible to change the font of a document in Apple Pages?
3
How do I choose "System Font" in the font picker?