RAID storage drive failed - what to do?

I have a macOS Server setup which is connected to two RAID (0, I think) systems. One of them does not work anymore.
Disk Utility shows that one drive is missing/damaged. It is not missing, thus it must be damaged. 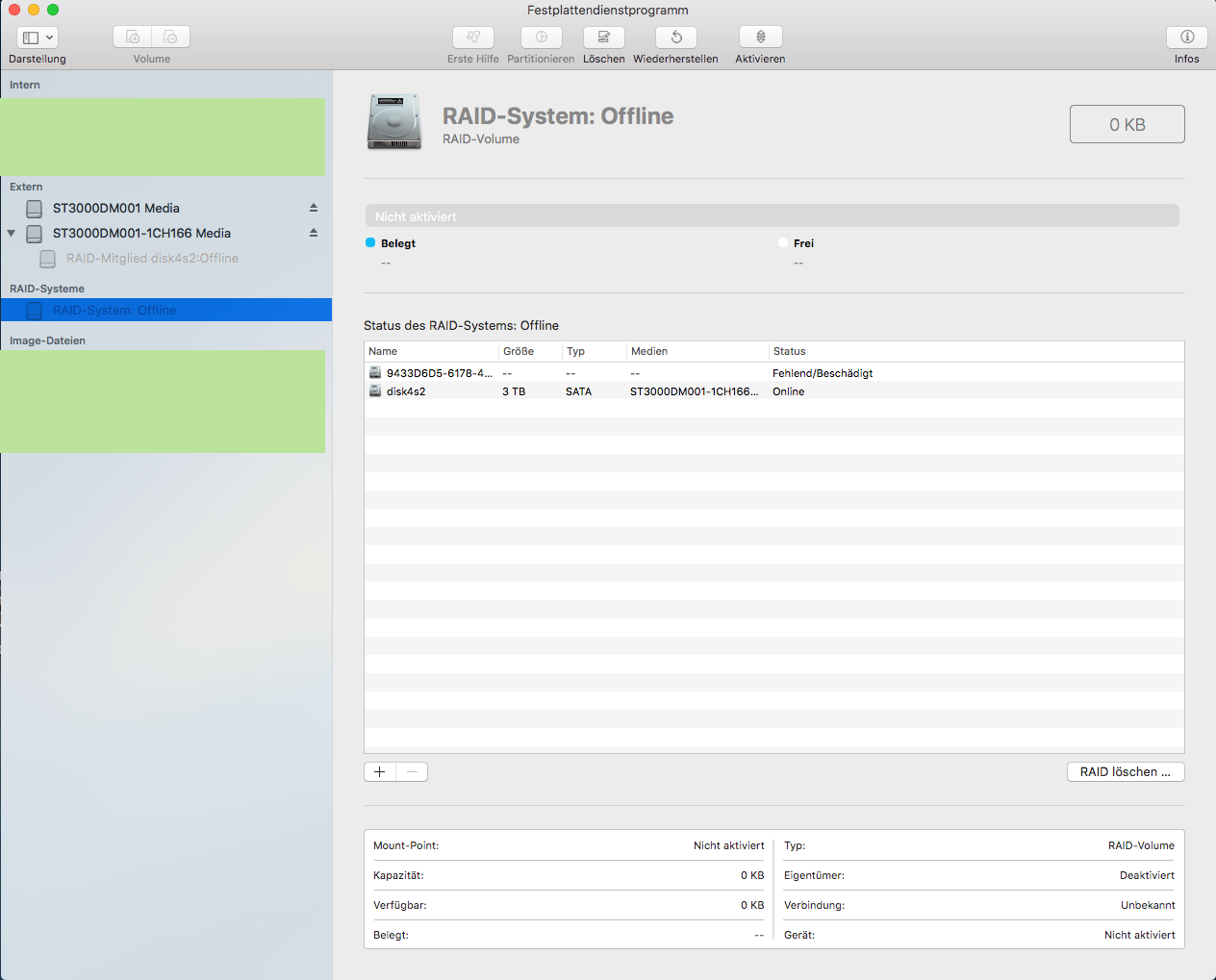 This RAID system was used for Backups, which we currently are doing somewhere else and therefore it is not necessary to get the data back, but welcome.

The drives are two Seagate Barracuda with 3000GB storage each. Taking the drives out of the case and plugging only one of them into the Mac produces the following behaviour: With both drives macOS shows this error prompt:

(The inserted media could not be read from this computer; Initialize/Ignore/Eject)

My question: What steps should I take next, to investigate this issue without harming the failed drive further?

If you have read through all this: thank you so much!

What steps should I take next, to investigate this issue without harming the failed drive further?

Stop using, manipulating, testing, whatever you're doing to the drive immediately.

At this point, all you know is that your RAID array failed. You don't know what in your RAID failed and it could be one of two components:

If it's the enclosure, your drives are likely fine. Continued use of them, even if interrogating them for diagnostics could compromise the RAID table sending your data into oblivion. You can test the enclosure by putting in two more drives; cheap, used ones are fine and they don't have to be large capacity as you're just testing functionality. If things fail again, it's the enclosure.

If it is the drive, you don't want to keep testing them out or attempting data recovery, you could further damage them making recovery impossible.

You will end up with two image files, one for each disk. rdiskX is the disk identifier of the disk you're copying. You can then write those images to good disks to attempt to reconstruct your array as many times as you want without the risk of further data loss.

You mentioned that you don't know what RAID Level you were using.

I have a macOS Server setup which is connected to two RAID (0, I think) systems.

This is not entirely critical. If the drives can be remounted, the RAID table which holds the configuration can be read and recovery can proceed. I have recovered RAID arrays in Windows several times using software made by Stellar Phoenix with excellent results. There are a couple of RAID recovery vendors for Mac, though I haven't used them (because I changed my backup strategy long ago) - take a look at Prosoft Engineering and Easus. I have heard (anecdotally) good things about each.

This brings us to the final point that needs mentioning...

RAID is not a backup!

RAID is for performance and/or redundancy, not for backups. RAID 0, is striping data across at least 2 drives meaning the two drives are "combined" to serve as one big drive and both drives working in tandem means you get twice the performance (two drives reading one file). RAID 1 is mirroring which is great for redundancy and uptime. If a drive fails you continue to function lessening the impact of downtime.

PC Magazine has an excellent write up on the different RAID levels.

Going back to what I said about changing my backup strategy a long time ago, I architect everything (in my server rooms) for redundancy. Multiple servers would connect to two mirrored disk arrays that was either RAID 5, RAID 10, or RAID 0+1. Then we had two backups - one that did a differential every day and another that imaged the whole array weekly.

This is overkill for your purposes, but it illustrates the point of not relying on RAID for your backups.

In your case, you can use your RAID enclosure for backup. However, I would also have a cheap USB drive (a second backup) that backed up your system as well. The chances of both failing are much smaller now. I've written several answers on backup strategies:

If it's a striped RAID setup (e.g. RAID 0), then failure of one drive means you lose the whole thing. If one drive isn't working, you'll only have half of every file.

You should be able to install any pair of compatible drives, e.g. 3.5" SATA or whatever.

Early in your question you mention that you think it was a RAID-0. It is very important to know what kind of RAID it was.

If it was a RAID-0 there is no parity, fault-tolerance or redundancy so if one of the drives failed, which your description suggests, and it truly was a RAID-0 then your data is gone.

It is possible that you can ship the drives off to a data recovery company and they may be able to recover some or all of the files on the drives, for a fee.

Really the only reason to use a RAID-0 is so you get increased throughput and disk/SSD write speed. If you are looking for a RAID as a safe and redundant way to store valuable data then you need to look at (at least) a RAID-1 (usually referred to as a "mirror") so that if one drive fails the other has the data on it or the data is stored in such a way that you can easily recover the data (such as RAID-5, 10, etc.).

So in summary if it is RAID-0 and the drive died your data is gone. Recovery will be expensive, if at all possible.

Not the answer you're looking for? Browse other questions tagged hard-drive disk-utility raid .

8
How to backup Time Machine's backup to a cloud?
4
Accidentally ejected External drive while downloading file, now having problems reading
3
Offsite Backup Strategy for Multiple Macs
0
How to backup data from one external drive to another (one-way)
0
Trying to recover data from an external RAID drive

1
How can I reconfigure the RAID settings on a Maxtor OneTouch III?
7
Replace a failed disk in a Disk Utility RAID 1
0
Can a file be copied to one hard drive in a RAID 1 mirror set (software RAID), and later have the 2 drives sync up?
2
When creating a RAID 1 mirror set, do you need to have both disks available or can one be added later?
0
Does OS X's Disk Utility create hardware RAID or software RAID?
2
External hard drive disconnected during reformat: now will not format
2
RAID array creation in macOS
1
Recovering a RAID 0 volume
0
Adding a new hard drive to RAID1 software RAID fails
0
RAID 5 options on macOS Big Sur?