We recently had a meltdown of a Tomcat server, that produced an 82.7 GB "catalina.out" log file, which I saved for forensic analysis.

Try Glogg. There is a MacOs build on the download page:

I don't know about 80 GB files, but I regularly used it (on Windos) to open log files up to 5 GB, and it works great on those (memory footprint after indexing is about 100-150MB, and searching is very fast).

One note though - it's read-only analyzer, not an editor.

From the command line, it lets you view files straightaway without loading the full file into memory.

If the big file is not "Line delimited"

In terms of your immediate needs, the best free visual editor for macOS is BBEdit (linked to the Mac App Store download) and it does so much - a true powerhouse. Once you have it, you can also pay up for the pro / automation / out of gratitude features, but it's free forever if you want and like that price.

I also use vi to edit things, but that opens a can of worms for needing the shell, terminal app or another app and some studying to learn how to exit the editor (tldr; try ZZ or ZQ), customize it and teach your brain to think about operating on text in the abstract as opposed to using the mouse to select items. Also, a pager like less or more or bat is also very friendly to get started and navigate around massive files. (And bat gives you wings awesome colors and syntax awareness).

In your case, the console app that comes with macOS might also be worth looking at if you can use the search functionality there. Launch the app from spotlight and drag your monster file on the window to have a peek.

Just don't (open it as ONE file)

Is there any specific reason that you can not simply break it into about 1GB chunks with a script?

Yes, searching and similar functionality will suffer but that will already be the case with a 80GB file.

If you have specific break points in the script (days in the timestamp, startup / shutdown messages) you could also split it up for that. That way you would probably even get additional meaning into the file.

Also: once split up any decent IDE (like IntelliJ IDEA or any other) will give you search functionality over the text back.

[Beware: This comes from a programmer so might not be your approach or overkill, I can only say that it WOULD work in the end, you'll have to know if its worth it]

If your log file has timestamps and you know when you want to look, the quickest approach is to:

This should allow you to navigate quickly quickly to the relevant part of the file.

If you think you'll have a lot of searching within a subset of the file, you could alternatively use grep with a specific date or date-time combination (in the right format) to first extract that subset to another smaller file. For instance, if you know the crash occurred today a bit after noon while your log covers months, you could

This would give you all lines which contain a timestamp between 12:00:00 and 12:59:59 inclusive. Of course, the exact format will depend on the actual format used for timestamps.

grep will scan the whole file once to find all the relevant lines, which will take a little while on a very large file, but you'll then have a much more manageable file.

An alternative may be to use dd to "extract" a part of the original file, using offsets and lengths found in less (Ctrl-G to get the current offset). dd is a very powerful tool but can be very dangerous to use, so use with caution (and most definitely not as root or with sudo if you are not 100% sure of what you're doing):

Note that this is not very efficient, it's better to use a larger block size (bs), ideally a power of 2 such as 1024, and divide skip and count by that block size.

I'm pretty sure there must be other tools that do the same, though I'm drawing a blank. I think some versions of cat can do it, but not the one on macOS apparently.

With disk based text editors, the file is not loaded entirely into memory - what you see on the UI is a peek into the contents the editor has loaded into memory. I have used UltraEdit successfully in the past to do large log file analysis. Its regex based search tools and location bookmarks are especially useful. It loads the file snappily, and you can do regular expression based searches. The url takes you to a download page where you can download a 30 day trial version. There are other disk based text editors as well.

Since it has been a few years, I installed UltraEdit and opened the largest file I had. It was a 64 GB binary file and it opened instantly. Ran a search for a term and that took about 90 seconds. I have highlighted the file size with a red rectangle in the bottom right. The mac is an MBP 2018 with 8 GB RAM running Mojave. 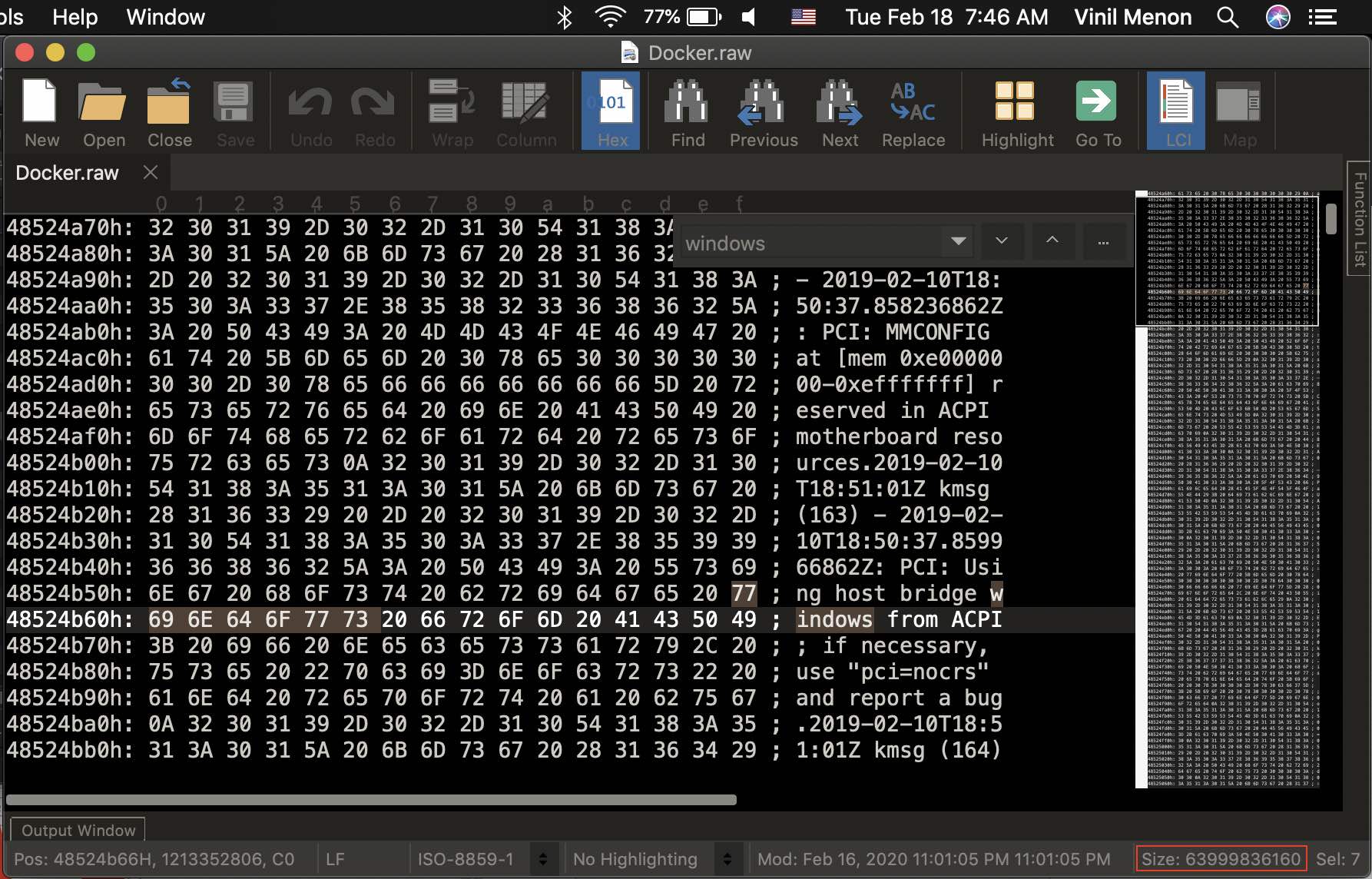 Even a Tolkien fan doesnt want 82.7GB of anything. You only want certain bits out of that; you'll know it when you see it.

And even contemplating a tool that analyzes the whole file is a waste of time, literally; it's going to spend 15 minutes just reading through the file assuming 100MB/sec. A lot slower if it's doing analysis of any complexity.

Terminal is your friend

The lifesaver here is that OS X is built on top of Unix. That was a big part of Apple buying NeXT and Steve Jobs coming back. That means you can use the entire suite of Unix tools, which are extremely well-honed, and very well supported here.

There are dozens of ways to do it without perl, but since perl is built into MacOS and is infinitely extensible, I prefer to start there (rather than do it in a simpler tool, want to improve the query somewhat, hit the limits of that tool, and have to re-craft it in a different tool). So something like this in a file called, say "xx":

That won't read the whole file, just seek to the specified location (10MB from the end), then read and print everything to the end. It will just print it to the screen, so to send it to the file, do this when you call it:

Now you have a 10MB tailfile.txt that you can open with something else.

There are simpler ways to do just that, but suppose you realize "Wait, I want to do more. I only want errors and warnings.” So you change the print command to

That too can be accomplished in simpler tools if you spend enough time rooting through docs. But then, you decide you need to see the three lines after the error. Just like that... you've outgrown the simpler tools, but this is trivial in Perl. You can just keep shimming Perl pretty much forever. There's a full programming language in there. Object oriented and everything.

A file that large is probably 99.999999% redundant (literally), so the key is to remove lines that occur a zillion times, to some degree of similarity, and examine what's left over.

On Linux there's a utility called petit, designed for analyzing huge log files, that does this. An example usage is petit --hash /var/log/kern.log. The utility can probably be found or built for Mac.

It processes each line of the file to remove things that make the line unique; for example, strip the date from each line, and substitute all strings of digits with a single # character. Each generic line is then hashed to become a fingerprint for detection of similar lines.

The result is that it outputs each line only once with a count of occurrences, vastly reducing the size of the data. Anything out of the ordinary is likely to show up clearly, and then one can search for that specifically, using utilities from some of the other answers here.

I don't know if this particular utility is performant enough for something that size. I would bet yes, because it has options for plotting graphs on the order of months or years of input, and wouldn't need to store much besides a small number of fingerprints. In the worst case you could write your own: for each input line, genericize it to a fingerprint, hash it, and add it to a database of hash+fingerprint+count, indexed by hash.

EDIT: petit seems to use more CPU and memory than desired, so I wrote my own simple implementation: https://github.com/curtmcd/hashlog. It makes one pass through the log file; it processes at about 6.5 sec/GB on my home Ubuntu server.

Definitely Hex Fiend. It opens files WITHOUT using RAM. It simply reads from the disk. Performance is absolutely incredible. I've examined 500gb password dumps with it before.

AlexAlex
62833 silver badges1010 bronze badges
Add a comment  |
1
Want to improve this post? Provide detailed answers to this question, including citations and an explanation of why your answer is correct. Answers without enough detail may be edited or deleted.

"joe", aka Joe's Own Editor, was designed to only load parts of the file as needed. I've never used it on a file that large but I never came across a text.file too large for it to open.

Open terminal and use vim to open it

Type vim and drag the file to your terminal. Then hit enter.

To quit vim (without editing):

I would recommend using Sublime Text. Although it requires a license it can be downloaded and evaluated for free without time or functionality limitations. That means that you or your company can have the chance to try it out as much and however you want. I personally use it for investigating logs of maybe even 3-4GB in most cases, or SQL dumps of even 12GB. On initial openning it does go through the entire file in order to perform 1st level indexing etc, but it comes with a progress bar indicating the whole process's progress.

Not the answer you're looking for? Browse other questions tagged macos software-recommendation text .

4
Is there an OSX app/way to batch rename files via a purely text interface?
0
Mac Mini running El Capitan Server unresponsive
1
How to prepend to text file in AppleScript?
1
When using a third-party script library, I can no longer save an AppleScript file in Script Editor.app
1
A file viewer like in Total Commander / Krusader
7
Save open applications and tabs state to file and be able to restore
2
TextEdit not responding after zooming in