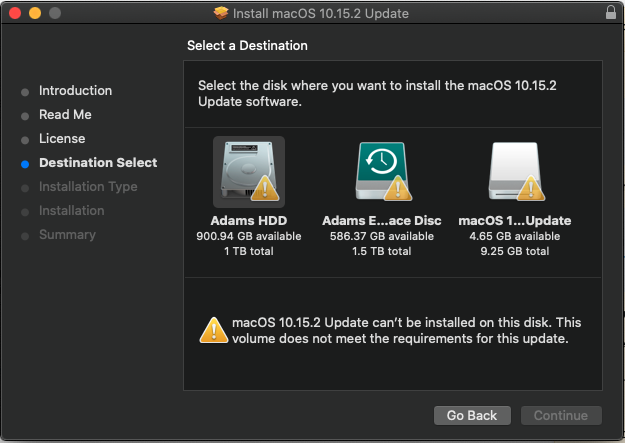 So I downloaded the delta and combo 10.15.2 update for mac osx. I first started noticing something odd when I re-installed catalina on my mac mini 2012 - which is supported.

For context, I did reinstall, what did that entail:

I am not on beta preview or anything like that and the regular software update states:

I tried installing in safe mode, wouldn't let me. For the reason described above in the first image.

As far as I know there should be nothing wrong with the HDD or no "compatibility issues" with the HDD, previously I was on beta for the last OSX installation High Sierra and all the updates came through including the beta catalina updates and so on and so forth, the reason I decided to reinstall after so long was Catalina beta updates felt like windows vista - nothing would work properly.

I do use home brew and home brew cask to install things but out side of PHP, MYSQL, Atom, Imigmagick and a few other things related to web development I have not installed any software that would be "incompatible" with future updates.

So can some one tell me whats going on?

Please tell me this will not require me to erase and reinstall I would be very sad. While it wont take me long to get up and going again I would rather avoid that situation if at all possible.

PS: I don't know enough about bootable USB's when it comes to macs, and while I do back everything up. I would also like to avoid that route as from other stack questions it seemed dangerous or could fail. If reformatting is the only option is there any steps I need to take to make sure the disk is compatible with future updates?

I found a solution:

So as unknown domain pointed out, I did originally after reinstalling catalina enroll in beta program only because my backups were in the beta installation.

But after realizing I could indeed get the info I needed from my backup disk with out having to be in the beta I unenrolled by clicking detail and restore to default.

As the internet points out that doesnt restore you back to non beta catalina. So what I did was redownload the catalina installation from the mac store and reinstall. I did not loose any data, it just installs it over top the beta version with out any data loss.

I can accept this answer in two days. I hope it helps others who might be in a similar situation.

Not the answer you're looking for? Browse other questions tagged install software-update catalina mac-mini .

8
Can I update apps that I've already purchased through the Mac App Store?
1
Mac Mini late 2012 second monitor resolution
0
Mac Mini (late 2012) No boot, heavy fans after upgrade
2
Increase VRAM on Mac mini Late 2012
0
Booted external drive running 10.8.5 on new mac mini got “no entry sign”, tried on late 2012 Mac Mini booted fine - why?
2
Can't upgrade to Catalina - only Catalina Beta is available
4
Brew cask: I would like to check if the package/formula is already installed through brew or other means