Is it safe to stack Mac minis on top of each other?

I am thinking of purchasing another Mac mini - I already have an older one - and I am planning to keep them on top of each other as I have limited space on my desk.

I was wondering if it is safe? I am concerned about ventilation. If this is not a good practice then is there any solution that would allow me to keep my new Mac minis on top of each other on my desk?

In How to position your Mac mini, Apple, perhaps being overcautious, say not to:

Don't put anything on top of your Mac mini or stack Mac minis on top of each other either. If your Mac mini is configured with AirPort or Bluetooth, you could hamper the signal strength since the antennas are located in the top of the computer.

If you only connect with Ethernet the connectivity issues are moot and even if you do use a Bluetooth keyboard or Wi-Fi you may well find it it works well enough for your situation.

Although not mentioned in the support article the Mac mini dissipates a large amount of heat through the case and insufficient ventilation will cause an increased temperature particularly in the lower mini if the hot air is trapped and can not escape.

It will certainly not harm anything to test stacking them as they will shut down if they get dangerously hot. Prior to a temperature related shutdown however you may find reduced CPU performance as there is less thermal head-room to Turbo the CPU clock, and it may also possibly shorten the lifetime of components due to running near the upper end of their safe temperature range for extended periods.

So while it can't hurt to try you should watch the temperatures. As @IconDemon mentions in their answer with sufficient ventilation this will not be an issue. As they mentioned in their answer ventilation may be improved by putting rubber feet or other spacers to increase the size of the air gap between them.

If you try it and find it is causing a problem either with heat (and thus fan noise) or connectivity, you could perhaps put them both on their sides with a gap between. As mentioned in the support doc above and in this question Is it safe to run a Mac Mini (i5) on its side? you can safely do this.

This vertical configuration would allow air heated by the cases to easily rise and escape rather than be trapped under the mini above.

I use an IKEA 7-inch trivet underneath my Mac mini to improve ventilation. That might help between stacked Mac minis : 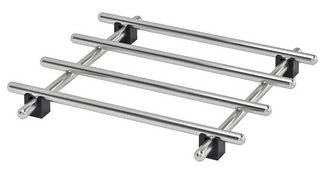 I wish I had a picture for absolute proof, but at one point we stacked up 5 Mac minis for several years running two FirstClass email servers, an OD server, and two file servers. They were in a well air-conditioned systems room with superlative ventilation.

To improve the air-flow between the Mac minis, I did stick 1/2" rubber feet at each corner of the chassis.

It depends on the workloads you subject it to. Except for extreme scenarios, you should be fine. Create a little clearance between the units and allow room for convection, don't put them in a cupboard.

If you are building a render farm out of new Mac mini's (don't), you're probably using them in a professional capacity. And you're probably planning to phase them out after 3-5 years. These are the kinds of scenarios where heat may be problematic.

If you plan to regularly max out the CPU and/or GPU of the unit (rendering, transcoding, gaming, heavy server loads), then two effects come into play:

The degree to which occurs depends on the design of the Mac mini's cooling solution. Some reviews indicate that the current model throttles during benchmarks and highly CPU-intensive workloads. Others indicate that it's not much of an issue.

As stated by @lx07, the Mac mini will shut down if it gets too hot. However, this thermal protection only prevents the computer from burning out. Well before that point, the increase in temperature is likely to reduce both lifespan and reliability of electrical components.

Apple designs the thermal solution accordingly and buys sufficiently high-quality components that this should not generally be an issue. The fan in a MacBook Pro often does not kick in before it reaches 70c/158f. This is deliberate.

Do note that HDDs are more susceptible to heat. HDDs produce more heat than SSDs and are (in theory) more severely affected than other components because they rely on specific mechanical tolerances. BackBlaze keeps their drives very cool: mostly below 30c/86f. I'd expect the effect to be exacerbated above 50c/122f, but I can't find a good source. Drops and vibration are likely bigger contributors to HDD failure.

Lots of great answers already but I have recently tried this and while heating etc., were not a problem, bluetooth connectivity was. It is hard to imagine not using bluetooth for something so be aware that covering the mini with something metallic and hence shielding can cause problems. I reshuffled my stack with the mini on top of two hard drives, with an Apple CD/DVD reader on the very top (Apple requires these drives to be connected directly to the computer). As long as I position the Apple CD/DVD reader just so, I get good bluetooth again. (-:

Not the answer you're looking for? Browse other questions tagged mac-mini .

2
Syncing iOS devices to multiple Macs with same Apple ID
9
Is it okay to stack an Airport Extreme on top of a Mac mini?
2
Possible to chain mac minis together?
3
Mac Minis: 2012 Quad Core vs 2014 Dual Core for a virtualization host?
3
Slow Mac mini (mid 2011) no hardware issues, no software issues
1
Mac Mini 2018 maximum carry weight?
0
How to make usb to shut down Mac Mini