How can I research what controllers or compatibility exists between OEM storage on various Mac?

No. These SSDs are not compatible.

The 2015 through 2017 MacBook Air laptops use the exact same interface, so, those are compatible. Also remember that you're comparing the 11" to the 13" model and those are different with respect to space.

From iFixit.com, I was able to find an excellent image showing the difference with the interfaces. While it implies that the 2013 through 2017 MBA interface is the same (it is physically), one has two channels (2013) while the other has 4 (2017). They also go on to say that it's possible to use an M.2 SSD with the use of an adapter, however, I can find no test results so YMMV.

This MacBook Air uses a proprietary storage drive connector, and is therefore not compatible with common M.2 drives without the use of an adapter 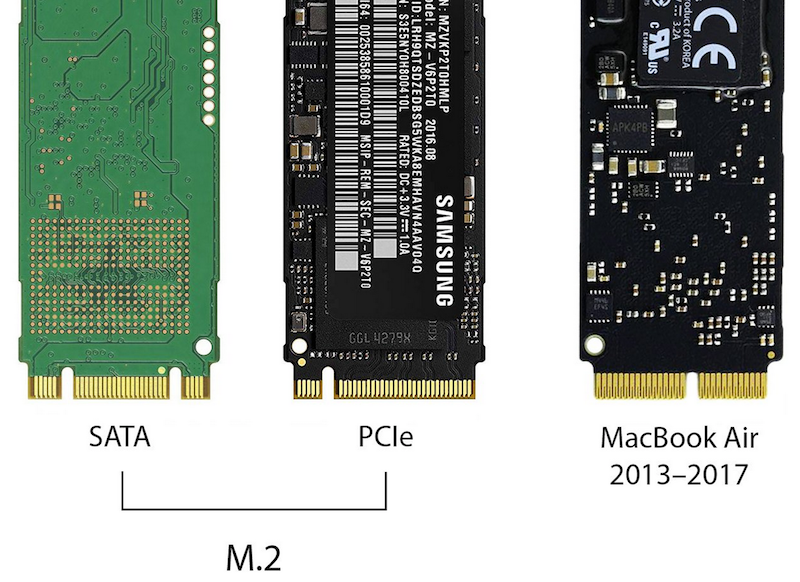 From the link provided by klanomath in the comments...

I'm the author of the Apple SSD article that klanomath linked to in their comment and I wanted to clarify some things that seem to have been misinterpreted.

Everyone in this discussion missed this paragraph from the article:

Despite all the good info in that article, it's a bit dense to read in places and I think much of the information could have been conveyed in a better way. I've recently started working on some improvements that should make it easier to quickly grasp the most important details and should be publishing those changes in the next couple weeks.

Not the answer you're looking for? Browse other questions tagged macbook-pro boot ssd .

1
When can I recycle my Macbook Air (mid-2013)?
2
Is this S.M.A.R.T. data normal for a 2013 Macbook Air SSD?
1
MacBook Pro, Mid-2014, SSD replacement
0
Is there an external SSD enclosure compatible with OWC Aura SSD?
2
Can I keep the OS as-is, on swapping SSD on compatible Macbooks?
1
SSD with PCIe 3.0 compatible with MBA which uses PCIe 2.0?
1
How can I evaluate which SSD adapter is functional with 2013 MacBook Air parts?