Time Machine backups are too slow

I used to backup on a USB flash drive, it was slow, and the drive became very hot in the middle of backup, so I bought a fast external SSD drive (2,800MB/s) which connects through Thunderbolt 3.

Is this normal? I thought it would be a matter of minutes with this drive :(

P.S. I found this command: sudo sysctl debug.lowpri_throttle_enabled=0 while googling for this matter, but it is for 2017, not sure if it is still useful and a good idea on macOS Mojave?

After running: sudo sysctl debug.lowpri\_throttle_enabled=0 it became much worse... even though I returned it to default enabled=1 , still 6 hours remaining. 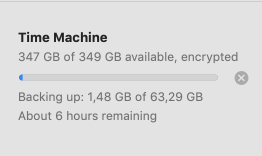 If your empirical evidence is increasing destination, then that’s not your bottleneck. (Sorry to restate the obvious)

I would look over the unified log file to see what’s actually happening and also not mess with any defaults (reset them if you changed anything) and use this tool to get some specific data:

It is a nice graphical wrapper and the author explains very well in their writing how it works, what some gotchas are and even how to read the system logs if you find you need different data than the Time Machine Mechanic utility exposes.

In the end, it’s probably more likely you need to exclude whatever data is taking a long time to scan or just live with the backup speeds, but I’d love a follow up question with some specifics if we want to get into if it’s bandwidth or iops that’s constraining your backups.

Also, case sensitive is an odd choice and not usual - do you have room to make a second partition and test the defaults journaled / encrypted HFS destination? The encryption isn’t going to make a difference in my experience either - so that’s a good thing to not test unless you’ve exhausted every other variable.

Not the answer you're looking for? Browse other questions tagged macos macbook-pro backup time-machine .