How do I prep a, temporary, root login before editing sudoers?

I want to alter my sudo capabilities on my mac, to avoid password prompts on starting postgres among other things. I'm reading Michael Lucas' Sudo Mastery and generally have an OK idea on how to modify the entries and use visudo.

However, Michael makes the point that, regardless of what you do, editing sudoers is inherently unsafe and can lock you out of your machine. And he goes out of his way to warn people to activate a root login, especially on macOS. Once your sudoers file is ok and you've confirmed that with a reboot, you can always disable the root.

I mean, if it's just copying the original sudoers and then, when things blow up, safe boot, go to the Terminal and restore the backed up sudoers, that's fine. But I want to be 110% sure I will not get locked out.

Note: I might very well try my hand on a Linux VM's sudoers first, but I still want to have an escape route.

No backdoor is required, in fact really nothing (not even a backup) is required to edit the sudoers file. You can't get locked out of your machine.

A backup (sudo cp /etc/sudoers /etc/sudoers.bak) is more convenient though, because you can simply restore it with a one-liner.

Tested in a Mojave VM by: 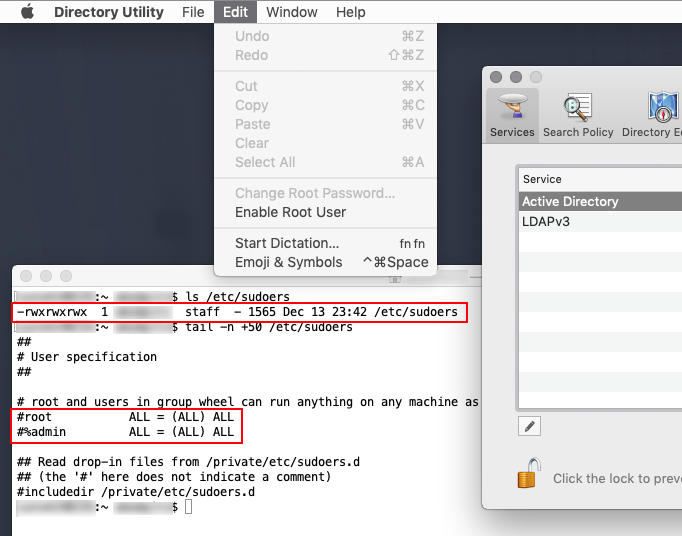 With due respect to the other folks who have offered suggestions so far, they are offering far more complicated ideas than are necessary.

Here is the simple truth: from at least 10.11 onward, there is no need to ever touch your /etc/sudoers file. None. Just leave it alone.

Look at the bottom of the /etc/sudoers file and you will see these lines:

What that means is that you can put files in /etc/sudoers.d/ and sudo will read them as if they were in the main sudoers file without ever having to touch the official sudoers file.

(In some versions of macOS, you may need to create the folder via sudo mkdir /etc/sudoers.d/ but in recent versions, it already exists.)

When you exit the editor, visudo will check the syntax for you, but even if you ignore the warnings and save it anyway, sudo will ignore any file in /etc/sudoers.d/ which does not have the correct syntax, but your main sudoers file will remain intact and working.

You can run sudo visudo -c to check the syntax of any/all sudoers files, and to show that they are being read/included.

Files in /etc/sudoers.d/ should be owned by root, they should be chmod 440 and they should not have any file extension (i.e. “foo” is ok but not “foo.txt”) If you create the file using visudo it will automatically be given the correct permissions.

(Oh, and you don’t need to enable root on a Mac. I’ve used one since 2003 and done all sorts of weird stuff but I’ve never needed it.)

macOS is a bit safer than most unixish OSes in this respect, since it has paths to root that don't depend on sudo. If you do mess up /etc/sudoers, there are several ways to recover (even without advance preparation, aside from backing up /etc/sudoers):

Then there's also the simple & universal method: before messing with /etc/sudoers, run sudo -s to open a root shell and leave it open so you can use it to recover if necessary. It obviously won't survive a reboot, but you can do basic tests on your new /etc/sudoers before rebooting.

Not the answer you're looking for? Browse other questions tagged mojave boot login sudo .

7
Is loading your desktop before login safe?
3
How to specify command to always run as root?
0
How to change boot login
2
mount encrypted sparseimage as home directory before login
8
How to solve “User is not in sudoers file, incident reported”
3
How to run unix script in login screen before user logs in?
1
how to delay the login items to start
0
How can I isolate what is causing the temporary “stall” during startup?
5
How to troubleshoot hanging macos login