Accidentially broke a header - but do I really need to worry?

I was upgrading the memory, SSD and optical drive (modded a blu-ray drive with the original upper shell from the SuperDrive) in a MacBook 2010 White Polycarbonate a1342 when I realized that one of the headers was...gone.

It turns out I may have accidentially broken it off, I think. So I took the cable and taped it somewhere else for the meantime.

The hader I think I have broken off is in the corner between the battery and optical drive. There are two very flat, slim headers with cables coming from - seemingly - the battery part, and they both plug in there. I somehow broke the other header, whilst not having even touched it after putting the plug back in (and it took me forever to do this with my fingers...). But when I was leaning back, I noticed that the bottom cable was loose again and when I tried to re-insert it, the corresponding header for it seemed to have disappeared.

I tried to find out what header it was, but unfortunately, all that shows up is the "Power on Pads" related topics and pinouts, with the MagSafe adapter included. But it does not tell me what header is on there, and if it is important or not.

After putting it together, I booted the laptop and it seemingly had no errors turning on. True, I have no OS on there right now but it still seems to be fine. The optical drive also seems to be powered and lets me insert stuff into it.

What do you think the broken header is, and how can I find it out? The cable seems to have two pins, whilst the other looks like having three. The 2-pin one has no socket anymore.

EDIT: I shared these pictures on Discord as I tried to get some additional help.

The broken header appears to be the right speaker connector (or the sleep LED connector). 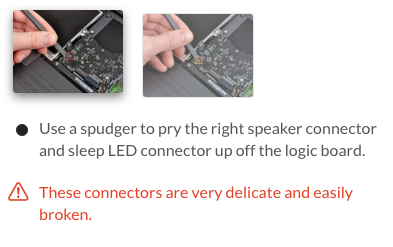 Comparing it with the "left side" (and considering the two cables only) I tend to the speaker connector. The accompanying text is not very precise.

Both links/pics from: iFixIt's MacBook Unibody Model A1342 Logic Board Replacement

Not the answer you're looking for? Browse other questions tagged hard-drive ssd battery optical-drive .

5
Slow SSD Performance on iMac
3
Can't see new SSD when connected via internal SATA port
2
MacBook Pro 4.1 not responsive?
0
Can't format 2nd HDD in optical bay on Mid-2012 Macbook Pro 13
1
Issues putting a hard drive in the optical bay of my early 2011 MacBook Pro
1
Do I need to get separate SATA cables to upgrade my SSD to another SSD, and my optical drive to an HDD?
1
macbook mid 2010 13" won't recognise ssd crucial mx200 HD 500gb placed in the optical drive