Is there an easy way to obtain all of the Boot Camp drivers hosted by Apple by using Windows, and not relying on macOS?

Please note that although this has a similar title to my previous question (Does Apple offer a page that lists all versions of published Boot Camp drivers?), the answer that I'm looking for is much different. :)

I'm aware that Apple offer multiple versions of Boot Camp drivers for each Mac model, and that there are several different (unsupported) ways of obtaining this. Does anybody happen to have a way of obtaining all of the drivers that Apple host for each Mac model that doesn't require macOS to be used? I realise that these drivers can be downloaded in PKG form, which from my understanding then requires a Mac to extract the *.dmg file from it that can then be used to obtain the contained drivers - I'm hoping for a way to avoid macOS, and use Windows throughout the entire process. Again, just to confirm - I'm not looking to obtain any model-specific drivers, but instead would like to be able to download all drivers hosted by Apple - mainly for archival purposes and to examine the differences between each set of drivers to establish the different drivers that Apple use.

You can until the 2015 model year. This is when Boot Camp Assistant application starting installing Windows without the use of a DVD or USB flash drive. Basically, the previous answer explained the drivers can be found using the links provided on the Apple webpage Install Windows 7 on your Mac using Boot Camp. These downloads are in the form a zip files which can be unzipped by Windows or macOS. As I already explained, the Snow Leopard ISO must be mounted on a Windows machine in order to access the Boot Camp files. If you mount the the ISO using macOS, the you will get the Snow Leopard files.

The previous answer included a BASH script/function which produced a list of URLs based on a given Mac identifier. When one of these URLs in pasted to Safari, a .pkg file would download containing the .dmg file, which contained the Boot Camp Support Software. I realize this requires a macOS, but the same thing can be done in Windows by using Microsoft Edge and some free third party software.

For example, installing git by default provides a BASH window which can execute the GetPkgUrl function.

The .dmg file can be extracted from the .pkg file by using Easy 7-zip. 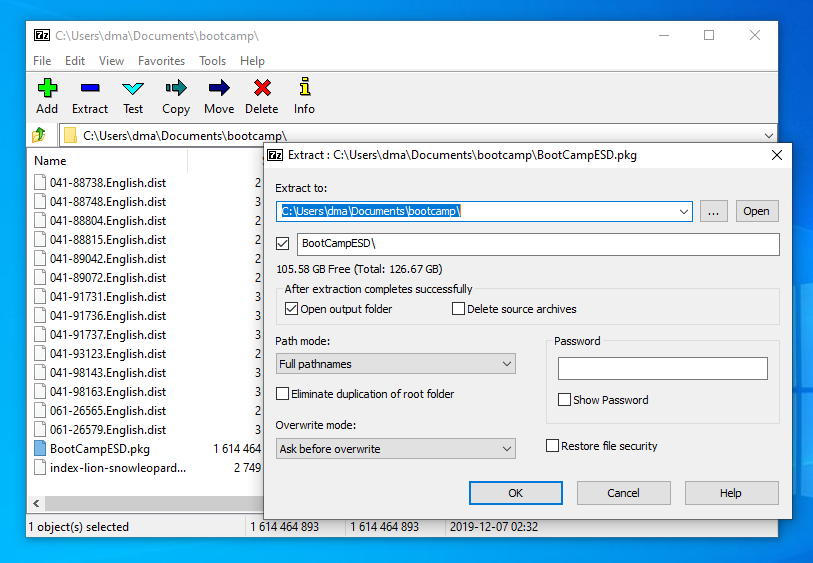 After clicking on the OK button. 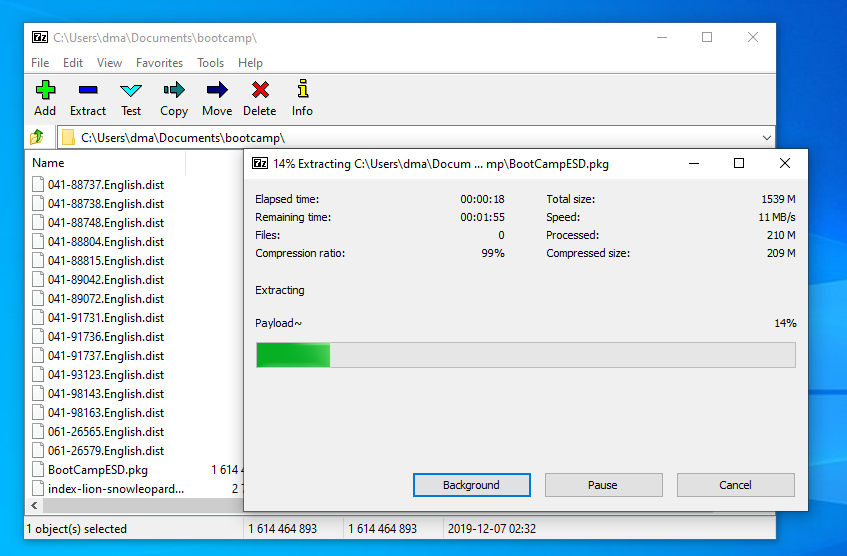 The result is access to the Boot Camp Support Software, which can be extracted from the .dmg file by using Easy 7-zip. 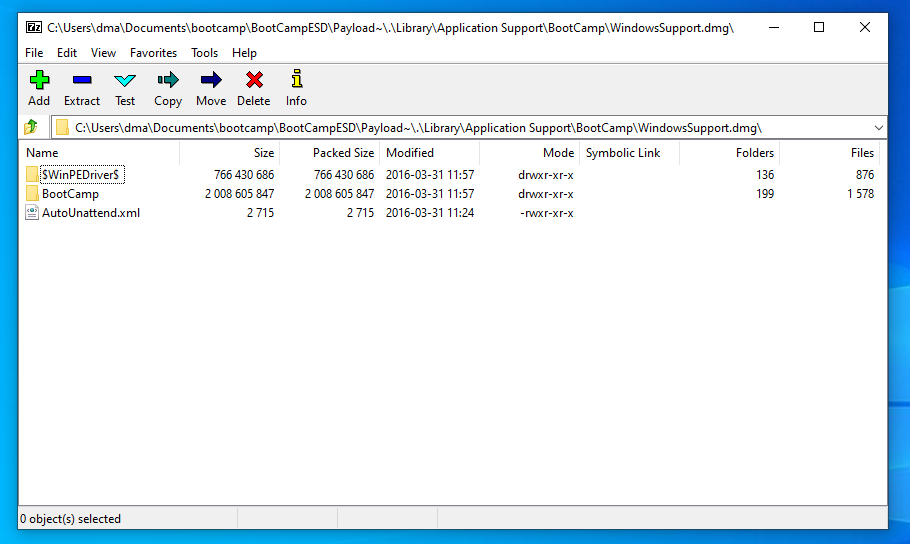 Did not check every model identifier, but for the iMac14,1 (2013) through iMac19,1 (2019), there is only one .pkg file per identifier. I theorize this is probably true for all 2013 and newer Macs. Therefore, it may to be too difficult getting the Boot Camp Support Software for the latest model Macs.

I realize what you are really looking for used to exist. When OS X was delivered on DVDs, the current version of the Boot Camp Support Software was included on the DVD. This covered all model Macs up to the release of the DVD. After Apple starting eliminating optical drives starting in 2012, there was a website providing links to the zip downloads. However, by 2015 Apple was switching from websites to the use of the Boot Camp Assistant to download the Boot Camp Support Software.

Not the answer you're looking for? Browse other questions tagged bootcamp .

1
Does Apple offer a page that lists all versions of published Boot Camp drivers?

5
Boot Camp 5 drivers not installing in Windows 8
1
Bluetooth Manager not present in Boot Camp (Windows 7)
3
How could I install Boot Camp drivers to my Windows partition?
5
How to reverse Windows scrolling direction in both VMware and Boot Camp
9
How to install Windows 10 into a 2011 iMac without using the Boot Camp Assistant, an optical (DVD) drive or third party tools?
0
Restoring Boot Camp boot from Windows 10 using High Sierra?
1
What are the Apple-provided drivers for the AMD Pro Vega 16/20 for Windows 10?
1
Do the version 4 Boot Camp Windows drivers depend on any older versions being installed beforehand?
1
Does Apple offer a page that lists all versions of published Boot Camp drivers?