My iMac’s internal HDD has died. No big thing, as it was not used anyways. The iMac came with an SSD and HDD from the factory and I’m fine with using the SSD only. (note: this was the pre “Fusion Drive” era)

Unfortunately, the broken HDD now makes clicking noises and so I want to remove it and leave its slot empty.

I read that with the Mid 2011 models, Apple did some proprietary temperature monitoring which makes it difficult to replace the stock HDD with an aftermarket one. Without a special adapter, the HDD’s fan would simply turn at maximum speed. (see e.g. here)

What’s however unclear to me and what I’d like to check before opening the iMac: Will I also run into these issues when I just remove the HDD?

Will I also run into these issues when I just remove the HDD?

The reason being is because that vintage iMac used a quasi-proprietary drive that had a temp sensor built in. Remove the drive, you remove the sensor and the fans spin up full speed.

Instead of just removing the drive, add an SSD and use an inline temperature sensor to regain the functionality.

A simpler yet still pretty effective approach is to install macs Fan Control https://www.crystalidea.com/macs-fan-control in there you can easily set you fan speed to be controlled by any other sensor (just pick one that is close enough to the main source of heat) voila, fan speed down, no additional hardware tinkering and works very nice with SSD as well

As noted by Allan, just removing the HDD effectively means removing the integrated temperature sensor. In case one wants to replace a defective HDD, his solution is definitely the way to go.

However, I didn’t want to replace the HDD but simply remove it (the HDD was never used, the internal SSD has enough capacity as a system/working drive for me, and I prefer a computer with as little spinning parts as possible).

Some more in-depth research brought me to this article (on archive.org). Towards the end, it shows what Apple did on iMacs which were delivered with just an SSD and no HDD: 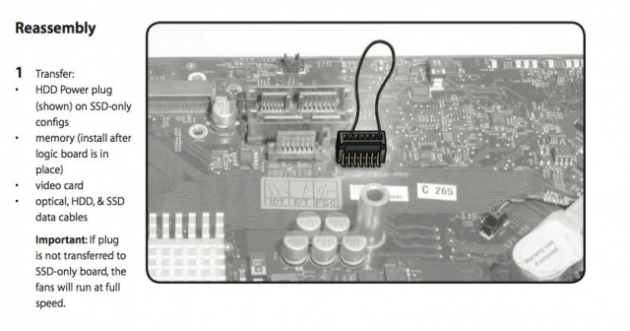 It’s just a plug that goes into the HDD power connector that shorts pins 2 and 7. Apparently tying the temperature-sense pin in the connector to ground signals to the BMC to just leave the fan at its base speed. Careful modification of the existing hard drive power cable should allow one to perform this hack while installing any drive of his or her choice — albeit while running the risk of having the drive overheat.

One can even find some online shops which list the mentioned jumper plug (however, either out of stock or for ridiculous prices). The Apple part no. is 922-9877.

What I did in the end: 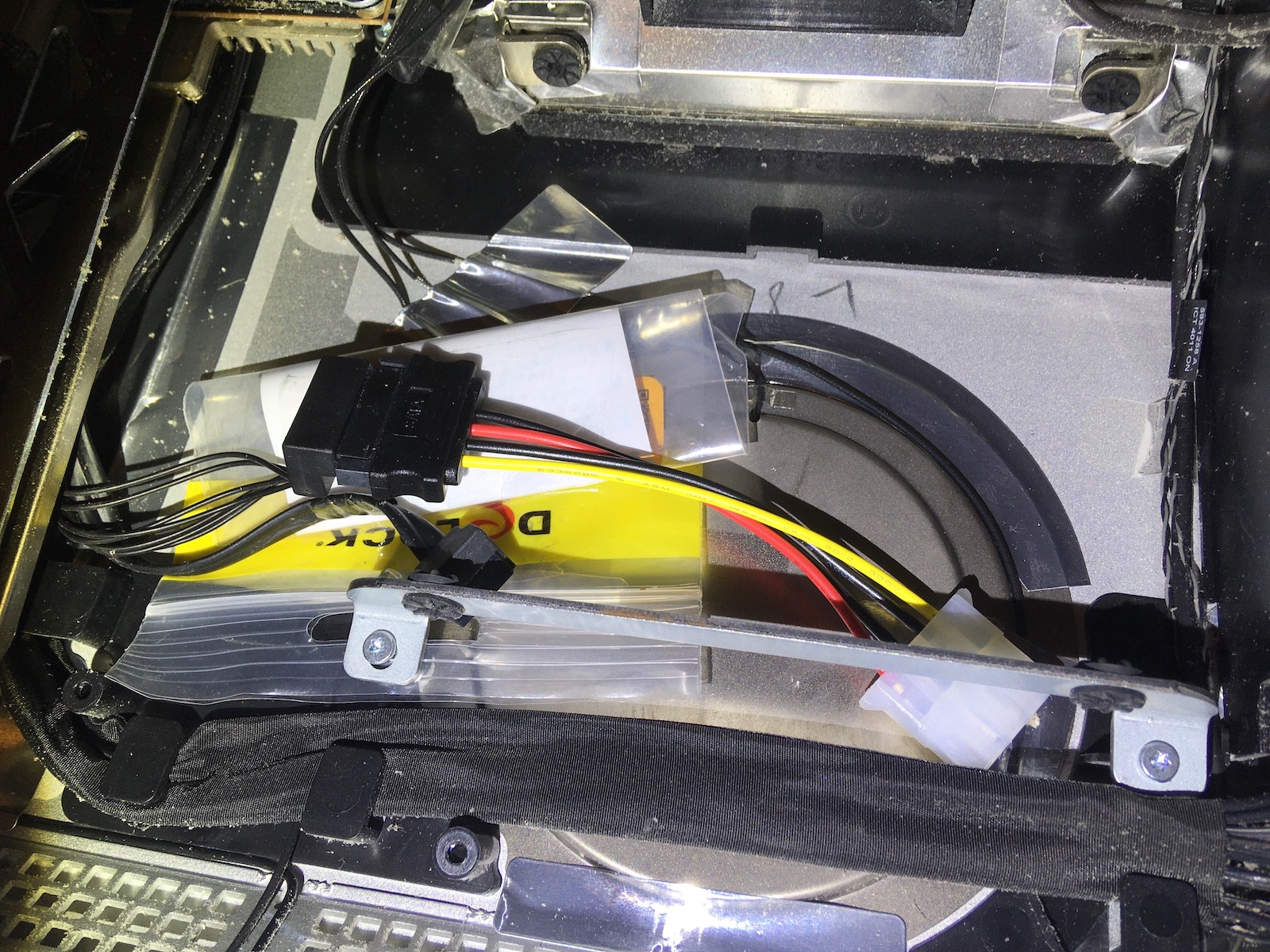 Warning: Again, this only makes sense when removing the HDD. Do not trick the temperature control when you add an HDD or SSD into the slot!

I followed the instructions in this article and the instructions work perfectly. In my case, I added an additional SSD drive and placed it under the optical drive leaving my HDD in place. After a year, I stopped using the old HDD and got annoyed by the noise of it constantly starting / stopping, so decided to remove it. When I removed the HDD the fan came on full - software solutions do not work. I plugged in a £3 adapter from Amazon (similar, but smaller, to the post above) onto the disused HDD power cable. The fan noise stopped completely. Here is the adapter I used from Amazon UK that worked:

Not the answer you're looking for? Browse other questions tagged hard-drive imac .

9
How to control fan speed in macOS Sierra?