I subscribe to a set of podcasts in which each "episode" is a song. I want to convert the episodes into songs in my music library. Prior to Catalina, this was straightforward. I'd edit the podcasts to change the "media kind" from podcast to music, then edit a couple other metadata fields.

Now with Catalina, iTunes has been split into separate music and podcasts apps. I can start the podcasts app and select a "show" to see the episodes for a podcast. From there, the first thing I tried was to drag several episodes into the music app.

First of all, dragging more than about ten episodes at once causes the podcasts app to crash. I suppose that's a bug which Apple will eventually fix.

Dragging a small number of episodes into the music app does indeed import the file into music. But absolutely none of the metadata for the episode is retained. The only metadata field which is filled in is the song title, which is set from the filename including the ".mp3" extension: 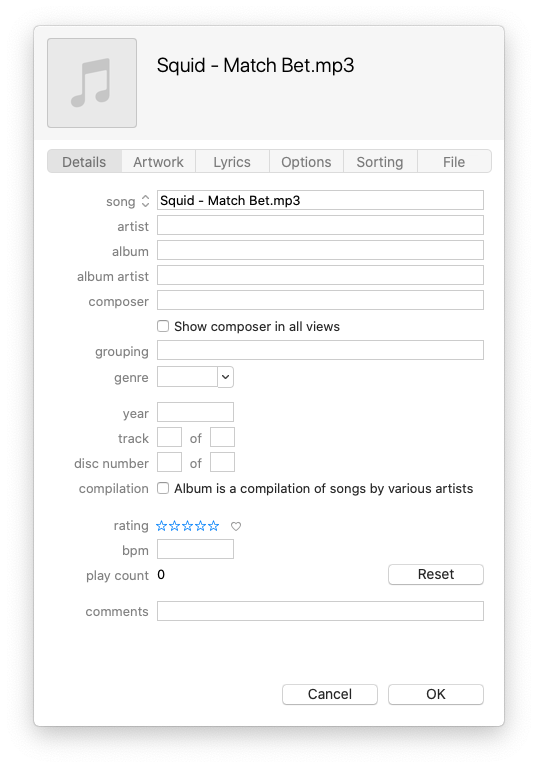 Does anyone know of a practical way to save podcast episodes as music on Catalina, preserving the information about the episode which was provided by the publisher?

Edit: Actually, importing into the music app didn't work at all. the Music app recorded the file's location as ".../iTunes%20Music/Podcasts/KEXP%20Song%20of%20the%20Day/Squid%20-%20Match%20Bet.mp3", i.e. the location of the podcast app's copy of the file. And the music app seems to think the song is zero length for some reason.

3
Can I make the Podcasts App play my unplayed podcasts in chronological order?
2
How does Apple's Podcasts app's Auto-Download of podcasts work?
2
iTunes is splitting one podcast into multiple podcasts. How do I fix it?
1
How to un-delete podcast episode in iOS 6 Podcasts app
1
Why won't the iPad Podcasts app download my MP3s?
0
add a certain episode to Podcasts app
4
Can You Make the Podcasts App Show Only Downloaded Episodes?
0
Podcasts stay on iPhone even when asking to synch 0 episodes
0
Phantom podcasts after restore that won't stay deleted
2
Random podcasts appeared in the podcast app