Why does Apple swap the @ and " keys?

On an English windows keyboard one finds the " above the 2 and the @ near the enter key on the right. On a standard English mac keyboard, as built into my macbook for instance, the two have their positions switched.

Why does this difference exist? Is it Apple which switched the two or was it Microsoft/IBM/whoever? Is there any rationale behind it or is it just down to the two evolving independently?

A bit broad, but…

Having " above the 2 is a UK English PC layout [one that drives me mad, even though I'm a Brit, I am simply used to @ being above 2 after 30 years of using Macs;)

US English does it the Apple way, even on Windows, so you could argue that it's the British PC layout that is "wrong", but in the end it's what you get used to.

If you change your keyboard layout in System Prefs > Keyboard > Input Sources to British PC, you will get your " & @ back to where you like them - however, it will also move other 'peripheral' keys to where a British PC has them, such as \ | ~ etc 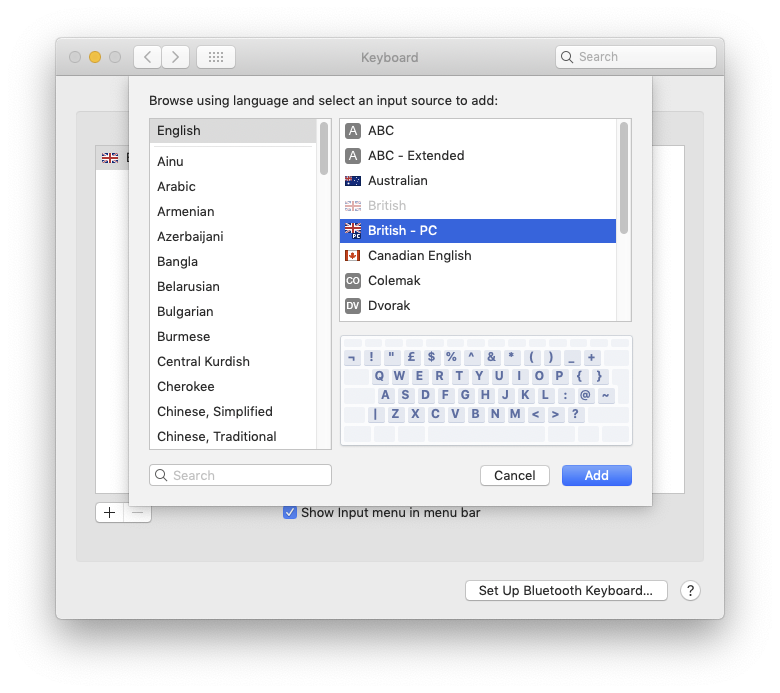 Only Apple knows why long ago they decided to ignore the British Standard BS 4822 when creating the Apple "British" keyboard layout. Later on they added the "British PC" layout to address the problem.

On a manual typewriter, the operator could press the key down with a lighter touch for such characters as the period or comma, which did not occupy as much area on the paper. Since an electric typewriter supplied the force to the typebar itself after the typist merely touched the key, the typewriter itself had to be designed to supply different force for different characters. To simplify this, the most common layout for electric typewriters in the United States differed from that for the one most common on manual typewriters. Single-quote and double-quote, instead of being above the keys for the digits 2 and 8 respectively, were placed together on a key of their own. The underscore, another light character, replaced the asterisk above the hyphen.

All differences between US and UK keyboards are listed here: https://en.wikipedia.org/wiki/British_and_American_keyboards

Not the answer you're looking for? Browse other questions tagged mac keyboard .

5
Strange behaviour from delete key on a non-apple keyboard
51
Return vs. Enter?
7
swap mapping of left and right shift keys
0
Function keys and Enter key on built-in keyboard of 13" rMBP mysteriously remapped. How to fix or reset to default?
1
MacBook Misidentifies Physical Layout of Built-in Keyboard
0
changing forward slash key to return key
0
How to swap ~ and § keys on Catalina?