How do I get my monitor to run at the correct resolution reliably?

I just started a new remote job. They shipped me a 2018 15" Macbook Pro, a 32" Asus PB328Q monitor (QHD, aka 2560x1440), and a Satechi USB-C adapter, with an HDMI cable for connecting the monitor. All of the above were used previously by a former employee. I am running macOS Mojave 10.14.6; upgrading to Catalina is not an option at the moment for IT policy reasons.

About 90% of the time (including right now), when I connect the monitor, the system runs it at 1080p resolution. As expected when running at non-native resolution, everything is blurry onscreen and I don't get the real estate I want.

If I unplug and replug the adapter from the laptop, or the HDMI cable from the adapter, there's a small chance it will come back at the right resolution. I have only had this work when plugging into the left-side ports on the laptop.

The Displays prefpane's extra window for the monitor shows that it is being recognized correctly as a PB328. Option-clicking on Scaled to reveal more resolutions does not help. (By default, only four resolutions are shown; option-clicking reveals several more, but none larger than 1080p.) 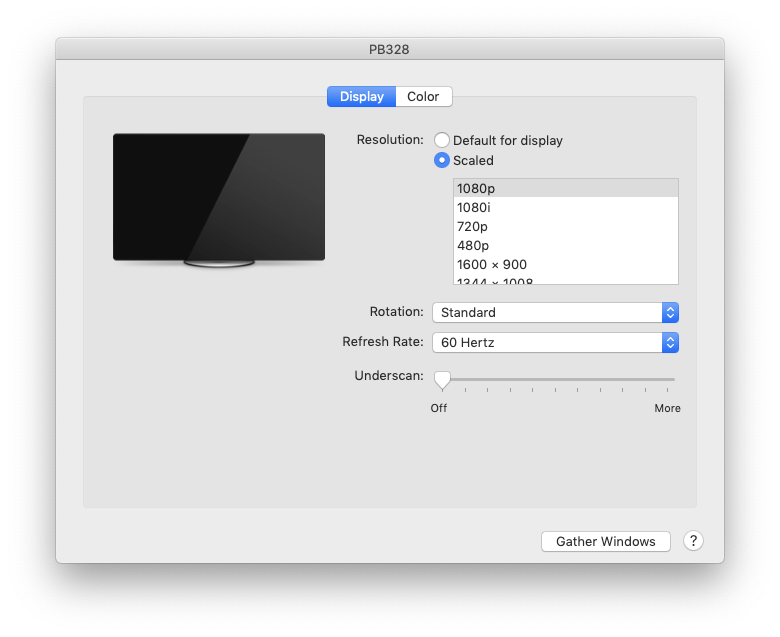 If I unplug and replug repeatedly, eventually the native resolution shows up. At the same time, the Refresh Rate dropdown is disabled and the Underscan option disappears. Perhaps these are useful indicators? 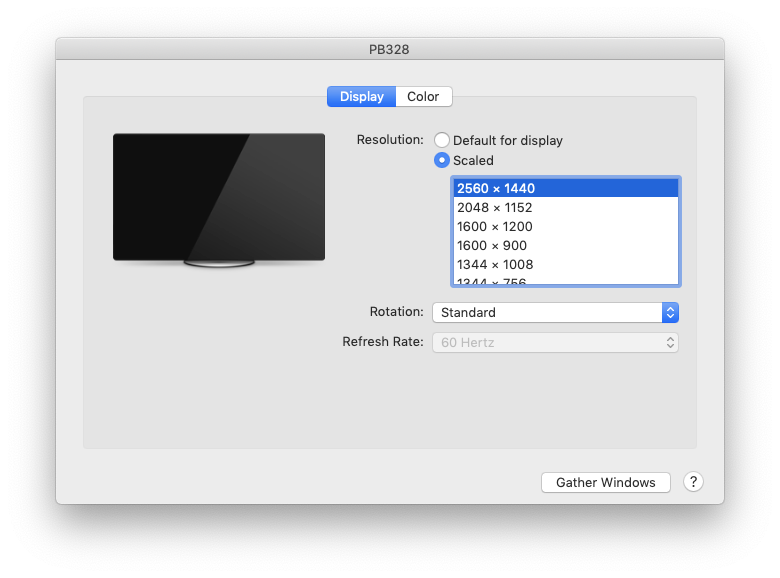 I found this related question, which has no accepted answer. ColorSync Utility reports "No problems found." The monitor does not support HDMI 2.0, so that can't be the problem. I am on the latest version of Mojave and this monitor is not new, so I don't think graphics drivers could be it.

Could this be related to switching between integrated and discrete graphics? If yes, how can I confirm and/or control that?

I have the same monitor and running MacOS Catalina 10.15.4. I believe a DVI cable (DVI-to-TB3: https://www.apple.com/shop/product/HLR62ZM/A/moshi-usb-c-to-displayport-cable) would get you higher res options + 75Hz refresh rate. Failing that, try using SwitchResX (https://www.madrau.com/) to expose some other display options. 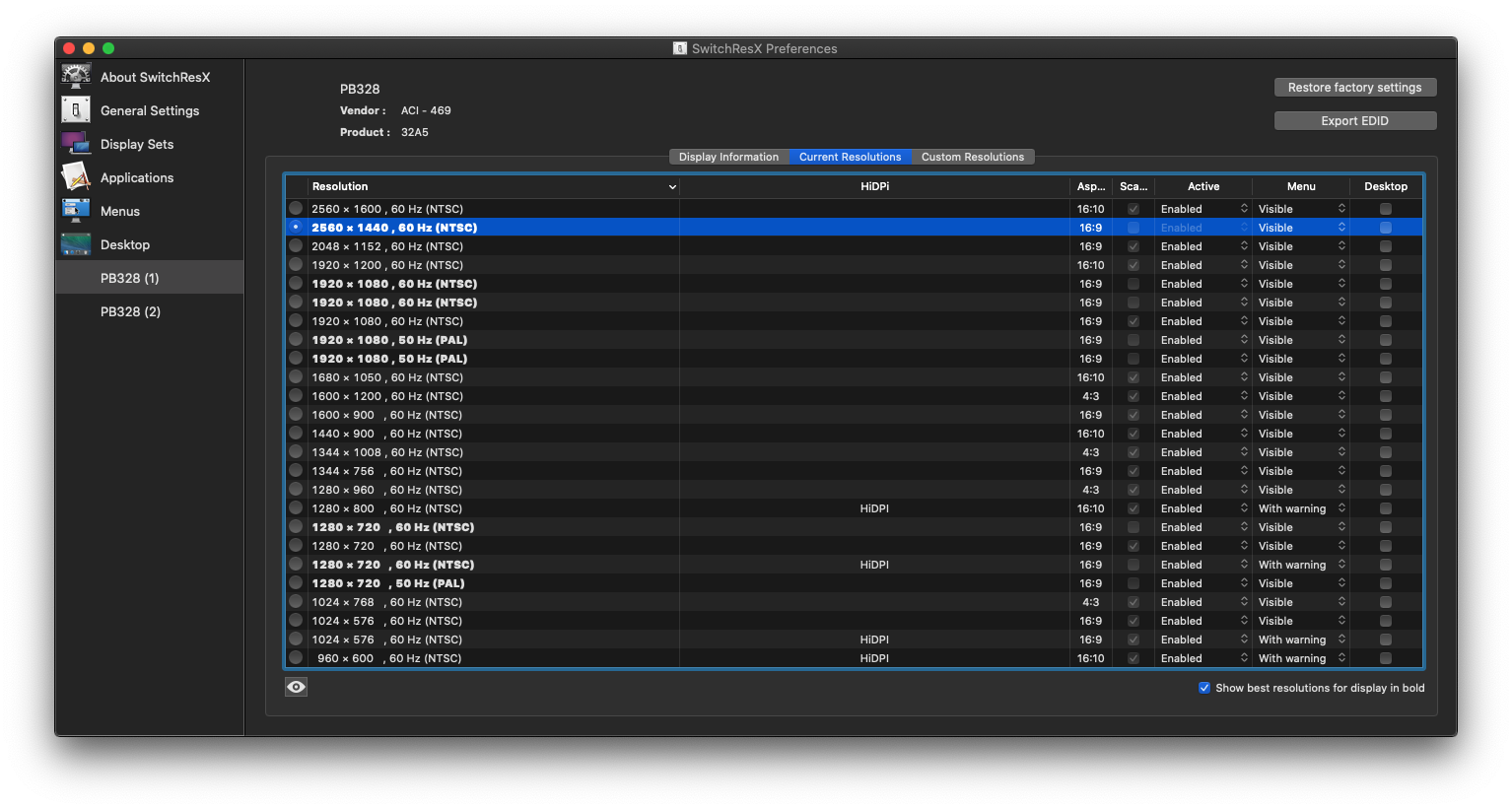 I ended up trying SwitchResX and gfxCardStatus to see if I could control the situation. Setting the desired resolution in SwitchResX caused the OS to render at that resolution, and then downsample the result to the actual resolution being sent to the display, which was unchanged. This was untenable.

gfxCardStatus would tell me when the system switched from integrated to discrete graphics, and having that information led me to believe that it was not related to my problem.

The Satechi USB-C hub began to glitch out on me -- sometimes, it would just not work. Other times, it would work except for the HDMI port. I was always annoyed by the fact that it required both ports on one side of the machine, and as such was fidgety to plug and unplug. I also didn't like that it hung off the side of the machine like a wart. I always worried that I would break it off.

I ended up spending $250 on a CalDigit TS3+ hub. Since Thunderbolt 3 is capable of 40Gbps per port (USB-C is only capable of 10Gbps), I get double the bandwidth available to my connected accessories and only one port utilized. I only have to plug and unplug one regular connector with a wire, and the TS3+ sits behind the laptop, out of sight.

A thing I learned while researching: pretty much all USB-C hubs use the same chipset. It's cheap, and it's not great. I don't know why another manufacturer hasn't swooped in with a better one. But there's no such problem with Thunderbolt. The devices cost more, but they work so much better.

With the TS3+, I have had zero issues. To anyone wanting a dock-like arrangement for their Macbook Pro, where you sit down at a desk and connect multiple things, I wholeheartedly recommend the TS3+. You plug everything into that, and when you sit down at your desk you just plug in the one cable. Power, ethernet, numerous USB-A and USB-C devices, audio, a 4k-capable DisplayPort, and an additional Thunderbolt 3 port for daisy-chaining (with the right adapter, you can do another 4k monitor here). I couldn't ask for more!

Not the answer you're looking for? Browse other questions tagged macbook-pro display mojave hdmi resolution .