I'm querying the ipstack API for data with a list of IPs using a repeat loop and JSON Helper.

I'm looping through a list of IPs, but I can't get the Script Editor to return all the results; I only get the one cityName of the last IP in theListOfips in the results pane, "Tallahassee".

How can I get the Script Editor to show a list of all cities in the result pane, with a carriage return after each?

The immediate solution would be to use the Replies pane rather than the Results pane in Script Editor. It will print a live result from each AppleScript command executed during the run of a script, whereas the Results pane only returns the overall result of the script's execution (which equates to the result of only the final command).

So for a more comprehensive solution, you can edit your script slightly so that the last command will be one that returns what you actually want. You can do this by first declaring a variable as an empty list, into which you would add an item of data in each iteration of your repeat loop. After the repeat loop is complete, your final command would simply be a reference to that list so as to have AppleScript evaluate its contents and return the result:

This returns a list of all the city names (or a list of lists of IP address-city name pairs if you elect to use the line I commented out as an alternative). To make this list into a single piece of text with one city per line, use the list that contains city names only; set the text item delimiters to linefeed; then coerce the list to text. So, instead of return the cityNames, you would have:

Make sure that you open up the messages pane: 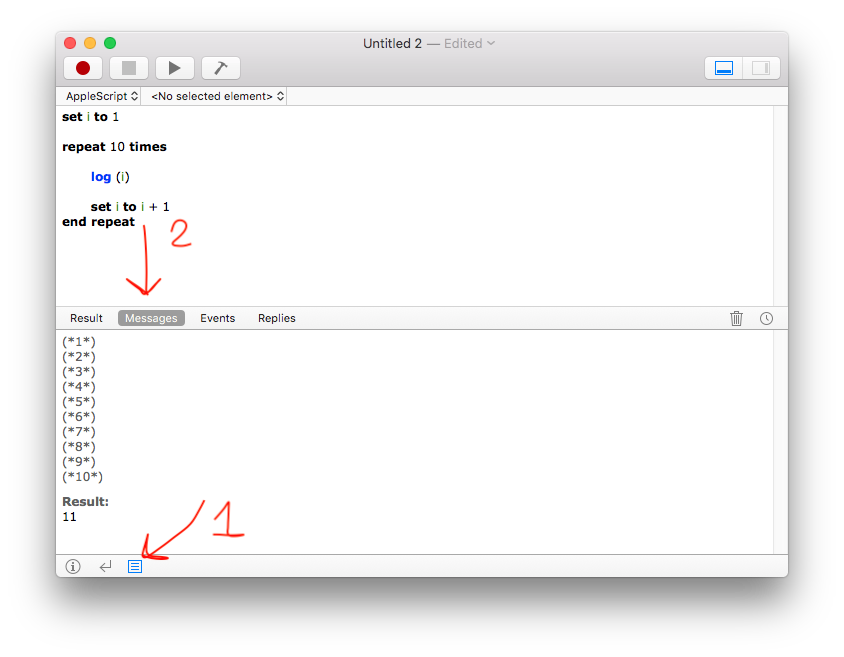 Edit: If it's important that it's only the returned value, than you could simply keep track of all the strings and add them together and return the composite. The above example modified:

Not the answer you're looking for? Browse other questions tagged applescript json .

1
How to pass an AppleScript variable to Perl script?
0
AppleScript error when attempting to delete empty albums in Photos.app
1
How might I save a variable between Applescript runs?
1
Find-and-replace AppleScript for iTunes Track Names
1
How to paste information from JSON Helper
0
AppleScript : convert decimal to hours / days
3
How can I automate repeat mouse clicks, with delay, from fixed coordinates within a browser window?
0
Applescript problems with renaming a file and getting the alias to change it's name as well