MacOS has an input method known as "ABC - Extended", which allows inputting most diacritics with any Latin letters. With it, "Alt" + various keys give a diacritic waiting to be composed, and pressing a letter produces the letter with the specified diacritic. For example:

Alt + U gives diaeresis (¨), which can be used to produce ü or ÿ

Alt + B and Alt + V give breve (˘) and caron/háček (ˇ) respectively, which can be used to produce Romanian ă and Pinyin ǎ.

My question: is there a similar way to input various diacritics on iOS/iPadOS? All of the system keyboards seem just to offer a limited set of accented letters.

The best way to have full coverage of diacritics is to get a hardware keyboard to go with the iOS device. Then you can just choose ABC Extended as your mapping.

Otherwise you have to search for a 3rd party keyboard (check the Keyman app) or use an app like Unicode Pad.

In iOS holding the letter down will present a choice of diacritics. 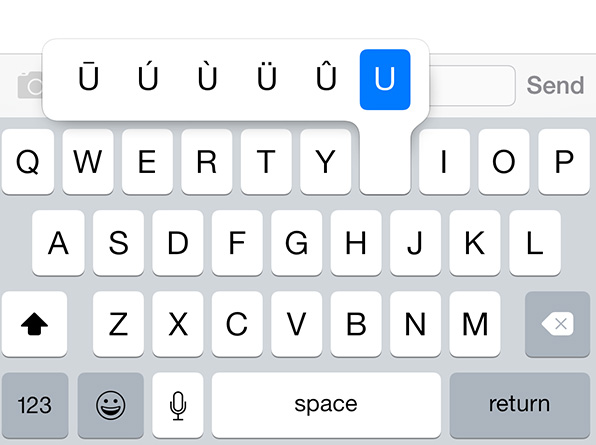 Not the answer you're looking for? Browse other questions tagged ios input-source text-input ipados .

2
How to input accented characters to an OS running in a VM?
1
How do I access LastPass Passwords on iOS/iPadOS from web browser?
4
iOS / iPadOS mouse scrolling not working
1
Where/how are default input methods stored?