I went ahead and changed the password (and used the old password) and the iCloud account said that it reset it.
Then I tried signing in again and it still failed: 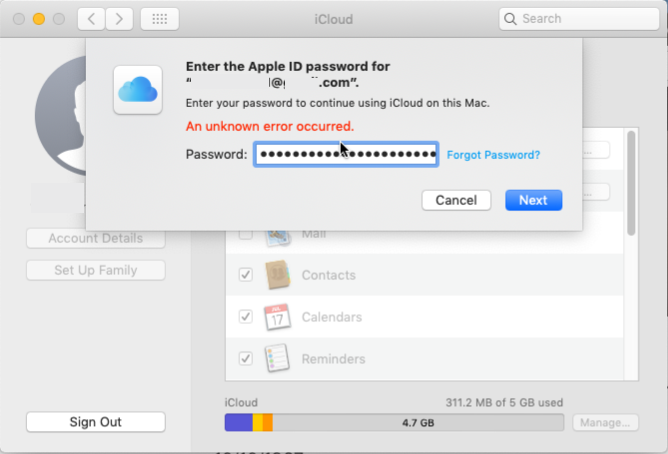 So, since I still can't sign into iCloud account (supposedly incorrect pwd) I decided to change it again.

Also, I had completely signed out of iCloud before trying this second password change thing.

Does anyone know why this occurs?

EDIT - Next Thing That Happened

So I decided that maybe my 32 character password was too long and I decided to try again, but when I tried it with the shorter password then it said, "I can't do that right now." and gave up.

So I then noticed that it is talking about my appleId. I know the password to my appleId, because I just signed in on the web site (to confirm) while using it.

Is this thing trying to get me to sign in with my appleId or iCloud id? This is a really terrible system.

I had to take the following steps to get it to work again:

The sign on worked but my appleId sign on now seems to have the same password as my icloud id which I thought was not possible in the past.

So, I guess the point is that if you encounter this error where you can't sign into iCloud you should reboot the device and work through it to see if you can get signed in again.

Not the answer you're looking for? Browse other questions tagged icloud password mac-mini .