It is quite famous that users posted frayed lightning cable or Macbook Power Adapter cable on the Internet or Tumbler. Here is for Google image for lightning, and another one for the Power Adapter.

Users' reviews on the Power Adapter on the Apple website: "Horrible adapter... end up fraying", "The cable frayed on me", "cable is frayed", "It frays like crazy", "they fray at the end", "fray way too easily".

How about users' reviews on the lightning cable on the Apple website? "begin to fray", "frayed very easily", "Poor quality, frays easily", "frayed and the internal wires are exposed", "It frayed", "frayed and damaged".

Personally, I have used several Dell or Compaq notebook computers and their adapters, and their power cords have never frayed. The webcam can be of lower quality, and the fan can be noisy, but the $29 adapter never had a frayed cable. One the other hand, iPhone's 30-pin cable, lightning cable, Macbook Power Adapter cable have all frayed on me.

Whenever I talked to an Apple Store associate, they all said, for 5, 6 years, their cable never had any problem. I do not know whether it is some script the company told them to read out, or whether they are told to claim so, but people I know had this problem, my relatives had this problem, I saw YouTuber wrapping styrofoam sheet near the Magsafe end to prevent it from fraying, and if half of the people found it good and half of the people found it bad, the review of lightning cables won't be near the minimum possible: either 1.5 star when the lowest possible rating is 1 star, or a 2 star. The same goes for its Macbook Magsafe 2 Power Adapter.

Is it actually under warranty? Because one store did replace it before, and another store said it is not covered.

By the way, some users may say they have some cable they have for 10 years and they never had a problem. Now, if the cable is laid flat, all straight on a desk, I won't be surprised they don't have a problem for 10 years. But, what if the power outlet or USB outlet is in front, and you need to plug in to the iPhone and see it upright -- then now the cable has a U-turn. Are Apple cables not supposed to have a U-turn? What about power outlet or USB to the left or right side of the table, now your iPhone or Macbook is connected, and the cable may have a 90 degree turn. Are all brands of cable out there able to have a 90 degree turn, except Apple's cable?

Some user requested a photo. If it is lightning, I should have thrown it away because I ended up buying the Anker Powerline II from Amazon anyways. At around $12-17, it is reasonable, and because sometimes I need 6 feet or 10 feet anyways. The $79 Macbook Power Adapter, since Apple didn't replace mine, I already threw it away. They are the ones of bigger concern, because you can't replace the cable, but you have to replace the whole power adapter transformer part, and it is $79, or $86.11 including tax. But I can tell how it looks like: it was all pristine and it was only broken "skin", somewhat similar to the photos below. Like I said, none of any other brands cable had fraying issue for me. Only Apple's does. The photos that I can find online that are similar to the situations I had before: 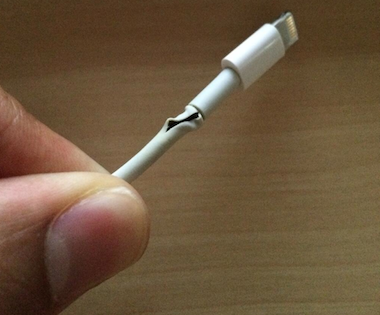 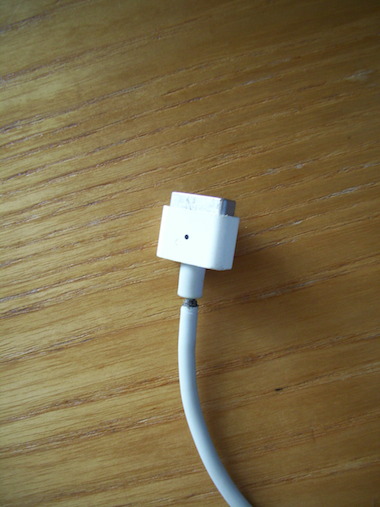 According to Apple One (1) Year Limited Warranty – Accessory:

This warranty excludes normal depletion of consumable parts such as batteries unless failure has occurred due to a defect in materials or workmanship and, damage resulting from abuse, accident, modifications, unauthorized repairs or other causes that are not defects in materials and workmanship.

This is the term that Apple store or service providers often rely on to reject warranty of cases like you mentioned. They could say it was caused by abusive usage behavior, or by accident thus violate the warranty term.

If you are specifically looking to confirm has Apple ever issued a recall/repair program for frayed lightning cable then the answer is No.

The only sure way to find out is simply to ask Apple whether or not they'll cover your specific cables under warranty.

Depending on the laws in your particular country, it is often so that if the frayed cables are due to a manufacturing defect (i.e. something that existed before you bought the product), or comes about due to normal use within the warranty period, then it is to be covered by warranty. That is not the same thing, however, as Apple actually covering it under warranty. Then you have to decide whether it is worth fighting for a replacement cable, or just buying the next cable from somewhere else.

In terms of addressing the actual, practical problem of frayed cables - it is important to treat any properly - i.e. take care when you roll them up, don't put too much strain on them, make sure to disconnect the cable by pulling on the actual plug and not on the cable, etc.

As to why these cables are different from other manufacturers - I have heard an explanation, which I cannot verify, which state that many other manufacturers use the material soft PVC (a type of plastic) and Apple does not due to environmental concerns. I do know that PVC is often highly recycable, but there could be other concerns.

Not the answer you're looking for? Browse other questions tagged magsafe lightning warranty macbook-pro .