Just few days ago, while having 2 external display and a thunderbold blackmagic ministudio recorder connected, the battery dropped to 0% despite the ac adapter was plugged in.

In addiction to this, sometimes the mac ran very slow (for example while hovering the icons on the dock, the magnifier effect looked jerky) and the kernel_task process took over 200% of cpu usage.

After that I found out the ac charger was 65W instead of being 85W (that was supposed to be included in the box... so it means I was mislead in first place from by seller). When I replaced it with the correct power adapter I solved all my problems.

But the doubt remains..

Does it make sense that the slow performance and the kernel_task process locking the cpu was caused by the wrong ac adapter only? Can someone confirm that I ultimately solved my problems using a more powerful power adapter? Someone who maybe encountered the same exact scenario and had the same issues. I ask because I'm afraid the cause was more subtle and I have still no idea if it could arise again also now I set up a more appropriate configuration.

I would suggest that your analysis sounds completely reasonable.

I have a 2013 MBP without a battery and it runs at 1.2GHz instead of 2.4GHz unless I override the BDPROCHOT setting that is set in the case of missing battery. CPU throttling to half speed is well known if battery is dead or missing. See here,here and here as random examples.

Lets assume your PC has a I7-4850HQ this has a maximum TDP of 47W. Add to this the demands of rest of the PC, your extra peripherals and you are easily using more than 65W so you drained the battery to zero (as you said) and this CPU limiting kicked in.

I'd suggest to prove it you download Intel Power Gadget and it will tell you the amount of power your CPU is using under whatever workload to which you can add your other peripherals. Here you can see my CPU is using ~40W on a similar 2015 mbp to yours with the jump in power usage just being due to rapidly scrolling up and down in Firefox for the sake of this picture. 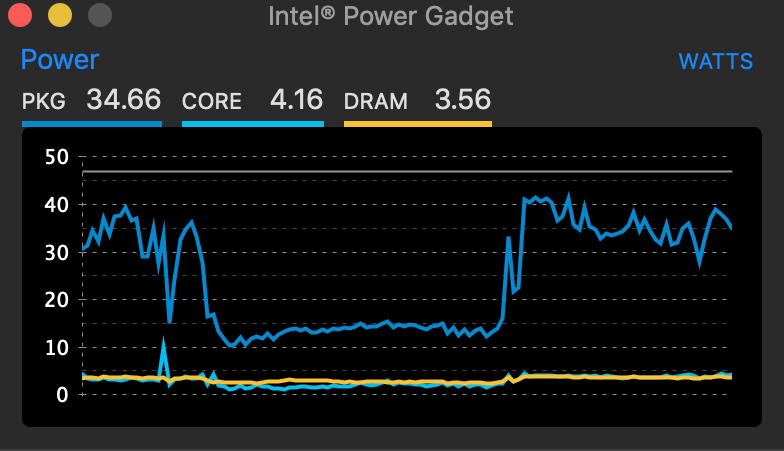 You can use various software cap the amount of power your CPU will use but that is another question.

Not the answer you're looking for? Browse other questions tagged macbook-pro charging .

29
How to disable the SpeedStep when using MacBook Pro without a battery?