How can JPG & RAW files be transferred from iPad to MacBook Pro & still maintain the albums built in iPad?

In the iPad Photos app I've put my photos in different albums. On iPad I'm using Photos & Affinity Photo. On my Macbook I've used Photos, Image Capture and iTunes & they import everything but not the albums, which is daunting because I've got 10,000 photos I'm importing. Which is also the problem with iCloud because it wants to backup everything & it's not obvious that it also imports the albums (at least Apple Support can't confirm that either)>

Photos app on macOS, via iCloud syncing maintains album structure. If the photos are in albums in photos app on iPad, turning on selectively iCloud for photos app only and turning off backup on iCloud can do what you want to achieve. 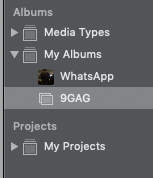 Though some offline method would be great too!

@ankii Thank you. That's useful information (you know more than Apple support.) I'll have to get more iCloud storage first to do that since iCloud wants to do all photos & with 10,000 to upload more space needed. An offline method would be nice. I thought once I plugged in my iPad to my Macbook it'd be more or less drag/drop op but apparently Apple in their wisdom haven't put that functionality into their system.

Not the answer you're looking for? Browse other questions tagged macos ios ipad photos file-transfer .

0
New Photos App on Yosemite Isn't Syncing Smart Albums to my iPhone or iPad
3
How Do I Import Burst Photos That Aren't Being Recognized By My iMac?
3
How to automatically copy new photos from an iPhone to a Windows PC when plugged in?
2
Can I preview iPhone photos on my MacBook display before actually importing?
1
JPG photo filenames after an iPhone to "Photos app" import
1
iPhone 7+ resists 11 methods at having its pictures transferred. What now?