I've tried many things to assign a 1-key shortcut to the "Step Into" debugging function in the VBA editor for Mac Excel (Mac VBE). I posted a question about this on Stack Overflow but my experience is that Macintosh-related questions often don't get resolved there, as in this case.

Below are screenshots showing an attempt to reassign to the F8 key (which is used in Windows for this). Although it looks like it would work, pressing the key does nothing when debugging (although the awkward default shift-cmd-i still works). There are other 'solutions' to this kind of problem which do not work for me. Namely, using the FN key in combination with F8 or checking the "Use F1,F2,etc. keys as standard function keys" checkbox within Settings. I've also tried using a utility called FunctionFlip, but like others, it didn't work for me. 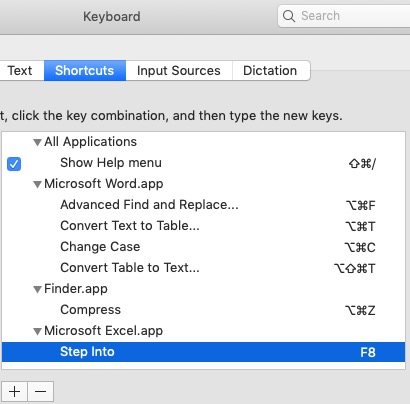 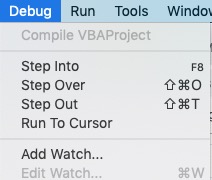 I'm not tied to F8, and would be happy to reassign others such as F5, F6 or F7 which are already used within the Mac VBE. I say this because according to a comment by Emilio F8 is special on the Mac. But when I tried with F5, for example, it also failed.

I'm using Excel 16.29.1 on an Office 365 Personal subscription on a MacBook pro without a touch panel (which I understand replaces the function keys), and I use both notebook keyboard and an external (mac) keyboard purchased in 2019.

1
Can I run Spotify by pressing my F8 button instead of iTunes?
0
FunctionFlip doesn't work. Alternative/fix?