Equivalent of =SUM(ABOVE) in numbers? 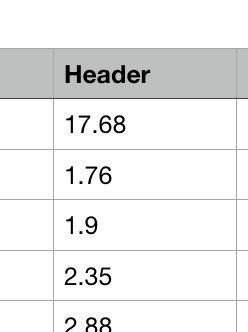 I need to sum all fields above (exclude the header), the following formula works:

When I add more rows I must rewrite the formula, then I tried something like this:

Because there's a header in column C, SUM function failed as expected.

What should I use? Number does not support =SUM(ABOVE) and MS Excel is as stuck as it can be.

When putting a sum-over-the-entire-column formula into a regular cell, you are basically self-referencing the formula cell as a value cell.

Try putting the the formula into a footer row. This way you can reference only the cells in a column without including the header or footer row. 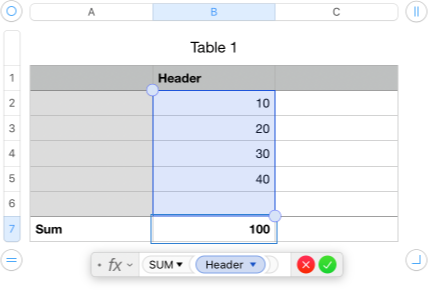 As shown, only the cells, without the header or footer row, are selected. The sum is calculated over all cells in the column, even when adding new rows.

Using version 5.1 (5683), to my (limited) knowledge of Numbers, there is not an equivalent of the Excel =SUM(ABOVE) formula in Numbers.

If you primarily want to use the keyboard, start by adding a keyboard shortcut for the SUM formula in Numbers in System Preferences > Keyboard > Shortcuts > App Shortcuts as shown in the image further below.

Now, in Numbers, you can sum any column above the selected cell by pressing: ^S

If you then need to extend the number of cells beyond the cell that has the SUM formula, simple do the following:

You now have a new sum for all cells above the selected cell you want the SUM formula in. 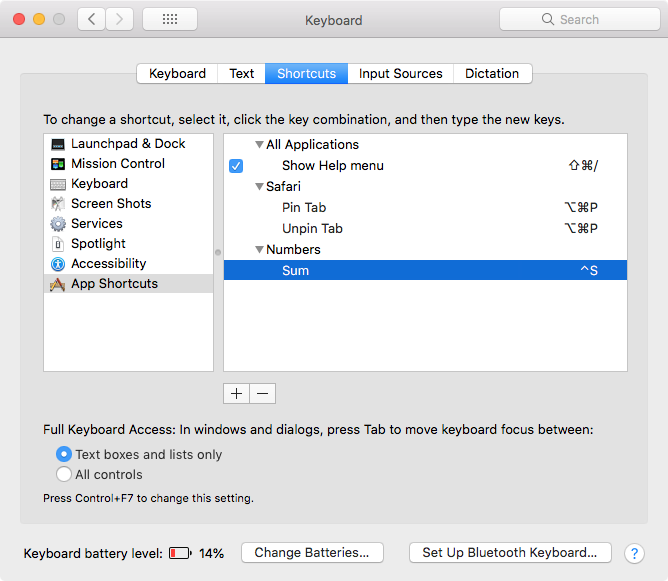 The shortcut is: Control-S

You can define your expression by writing = sum( and then clicking with your cursor on the first row you want to include and then dragging the cursor down to the last row. This is much simpler than writing the values in.

Below is an image of a sum expression. 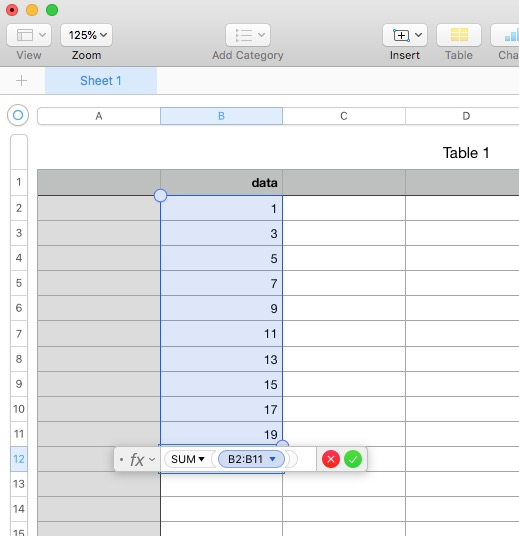 The only thing I actually typed was the characters = sum(. After using the cursor to select B2 thru B11 I typed the closing ).

Not the answer you're looking for? Browse other questions tagged ms-office numbers .

2
Can tables from Pages be reused in Numbers to create graphs?
6
COUNTIF using two conditions from data inside and outside the dataset
1
Can Numbers create stacked column charts with two columns for each category?
2
Numbers - Conditional Sum
2
(Numbers) COUNTIF values from one column match another column?
0
Adding column to multiple identically formatted tables in Numbers
0
Dynamic reference to a cell from another sheet based on text