Just upgraded to High Sierra on my MacBook air 2011. Unfortunately my Excel keyboard shortcuts have stopped working - I was using Karabiner to map F2 (usual windows edit key) to use ctrl u, which makes it easier to use excel. I had to also move to Karabiner-elements, as the version I was using isn't compatible with High Sierra. I have attempted to write a .json file to setup a complex_modification, but it doesn't seem to work - the event viewer just shows the f2 key Im using MacOS 10.13.6 Excel for Mac 2011 version 14.7.7 Karabiner Elements 12.6.9

The code I wrote is:

What am I missing? Thanks,

I just used the "customize keyboard" in the Tools menu and it works fine...

This image shows it being set up: 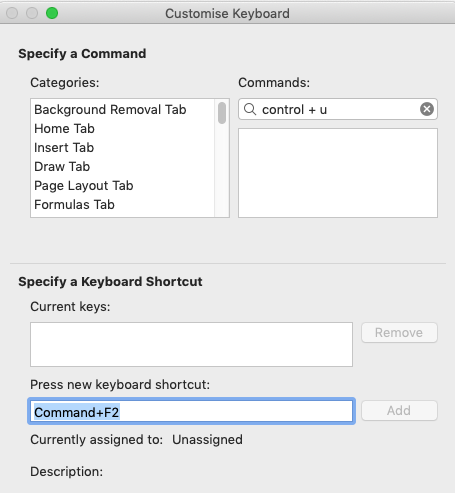 Not the answer you're looking for? Browse other questions tagged keyboard ms-office karabiner mapping .

43
What is the keyboard shortcut for editing a cell in Excel?
111
How to add a line break in a cell in Excel for Mac
3
How to change default cell formats in Excel 2011?
5
Karabiner elements custom complex rule
4
Can only use custom keyboard layout in certain apps?
1
How to map CTRL + Left Arrow to Home with Karabiner-Elements
0
Excel iOS app: Keyboard shortcut for Edit cell
0
How to map Ctrl + Delete to Fn + Opt + Delete with Karabiner-Elements