I can't mount an external hard drive. I have tried booting into Safe-Mode, mounting via Disk Utility and running First Aid, which won't proceed due to the following error:

diskutil eject disk1 Volume timed out while waiting to eject

I have also gone through the steps oulined here and here, as well as using Clean My Mac.

There is a 3rd party app named Mountain which I use on my mac. It puts an icon in your menu bar and when you click on it. it will show a list of Volumes and you can mount or unmount them. The app is $6 but has a free trial period so you can test it and see if it solves your problem. See image below. 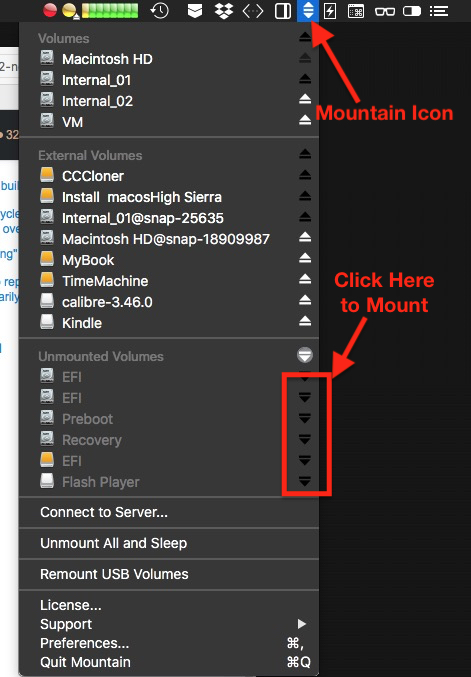 I have encountered this problem but in my case, Bootcamp had created the problem. I mounted the disk in Windows (Bootcamp) and apparently, the disk did not eject properly. So when I switched to Mac OS, I found the disk unmounted but not able to eject it. In Disk Utility it appeared pale. So I did like below:

The second column is the id of a process that makes the disk in use. So you should do this:

Then your disk is free to be ejected by this command:

Not the answer you're looking for? Browse other questions tagged macos external-disk mount .