The very same app (in this case, Bolt) shows the language selection normally on my wife's device.

I've had the issue before with some other apps, but that happens rarely so I don't recall which apps they were. In either case, it doesn't seem a problem with an app, as on other devices the language selection looks fine.

Here is the screenshot from Bolt and Uber, running on the same device.

I have searched the internet but couldn't find other reports of the same issue, probably due to many other topics around the same keywords. 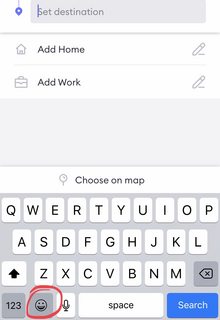 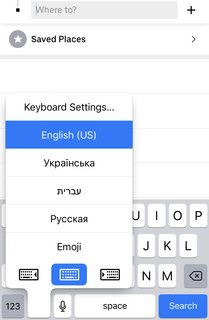 If I understand correctly, you are saying the keyboard languages show up properly in all Apps except a few. Is this right? Are you connected to the internet when the problem occurs? I ask because some language items (e.g., voice dictation) only work properly when an internet connection is available (sometimes you can't even see the mic, shown in your image). Like you, I have 4 languages installed (although I removed emojis). At times I've experienced problems (though different from yours) and I did something like the following to solve them:

In your case, I suggest you delete the problem App(s) before step (3) and then re-add them after step (3)

If you are able to see the language keyboards in most Apps (Mail, Notes, etc...) but just not in some problem Apps, I would contact the developer, sending them a screenshot.

Not the answer you're looking for? Browse other questions tagged ios keyboard language internationalization .

2
What is the difference between the variant language dictionaries in OS X?
1
How to change secondary/fallback language on iOS 8?
14
iOS: How to set language of app independent of iphone/ipad language
2
How to change the Languages value shown under the Information section for my app in App Store?
2
Changing the Region changes the Language on iOS11?
1
iOS/macOS - Determine Emoji name while choosing
0
If setting a system language in iOS doesn't take effect for apps already installed. What else can be done?
4
iPhone: Why does the keyboard language switch randomly?