Have anyone seen this message before, when accessing the official twitter app?

I have an iPod Touch with iOS 5, not jail-broken.

Is it a virus? 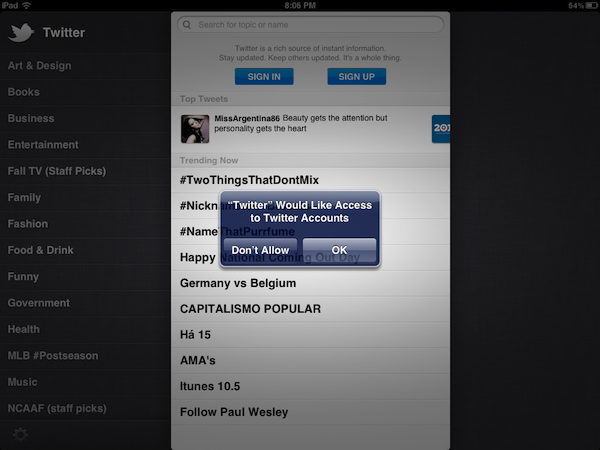 There are no viruses or exploits in the wild for any handheld Apple device. Furthermore, such exploits would require the installation of a unscrupulous app, something which Apple's App Store protects against.

You can read more about Apple's iOS Twitter integration here.

I would report this as a bug to Twitter.

Not the answer you're looking for? Browse other questions tagged ipod-touch ios .

5
Settings icon deleted accidentaly from iPod touch
0
How do I get my iPod touch to change the locked screen wallpaper?
1
Can the Google+ app be installed on an iPod Touch?
3
Can apps use different Twitter accounts on iOS?
0
Delete all calendars and contacts in iOS
3
How do I revoke access to twitter for a single app on iOS 5?
3
Is there any way to remotly access ios device from another ios device?
0
How to mirror iPod Touch 4th-gen to TV?
5
Where did Twitter and Facebook accounts go in iOS 11?
1
How to launch Twitter app from Tweet URL in Reminders in iOS 11