Command/Control keys are split on PC keyboard with Mac

No matter how many combinations I try in Modifier Keys, unfortunately the control/command keys split responsibilities.

Is there a way to have one of these buttons for all shortcuts? I tried changing Modifier Keys to use Command for all shortcuts but my Mac would not respect it. Also tried Karabiner. FYI I'm using a Razer keyboard. 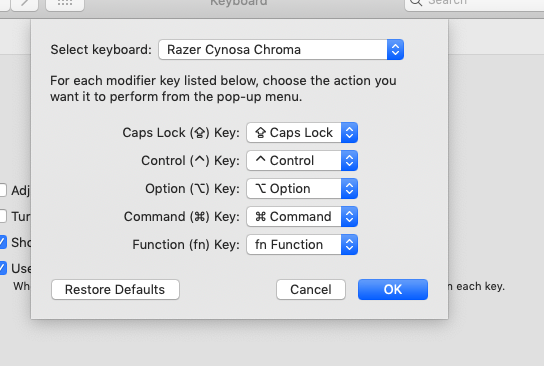 the above settings allows the following:

2) in chrome, i have to do windows t, r in order to open new tab or reload. in chrome url area - i can only do windows + z, x, c, v, a (ctrl doesnt work with any of these despite working partially in TextEdit!!)

I tried multiple combinations in modifier keys section for keyboard but no matter what combination i try, the commands always split b/w ctrl and windows key. i also tried Karabiner using every variation under the sun but to no avail.

Is a computer reset my only option? Brand new mac been using for 1 month. :/

Please note that <Ctrl> on a "PC" keyboard is the same as <CTRL> on a Mac keyboard. Normally on a Mac you would need to use <Command>-C for copy, not <CTRL>-C.

Note that on a PC keynote <Alt> and <Command> keys are normally reversed. Maybe this is what you are trying to fix via the Modifier keys in the keyboard control panel?

Below is the mappings hatI have for his exact configuration: 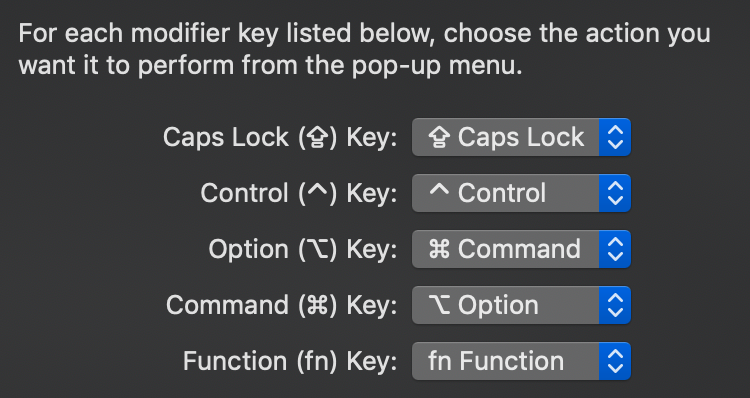 Not the answer you're looking for? Browse other questions tagged keyboard .

4
Switch Cmd and Control keys for one app only
0
Keyboard Shortcuts/Modifier Keys
1
Avoid using command for keyboard shortcuts
0
How to get Mountain Lion to recognise modifier keys from external Windows keyboard
2
Re-map keys on keyboard
2
Remapping Y and Z keys with Karabiner
4
How can I find which Control-Command keys are mapped to particular programs?