What does Apple mean by “This may decrease battery life”?

Does it mean that my battery will "lose capacity" over the years (months?) or that it will just uncharge faster because it's consuming more energy? 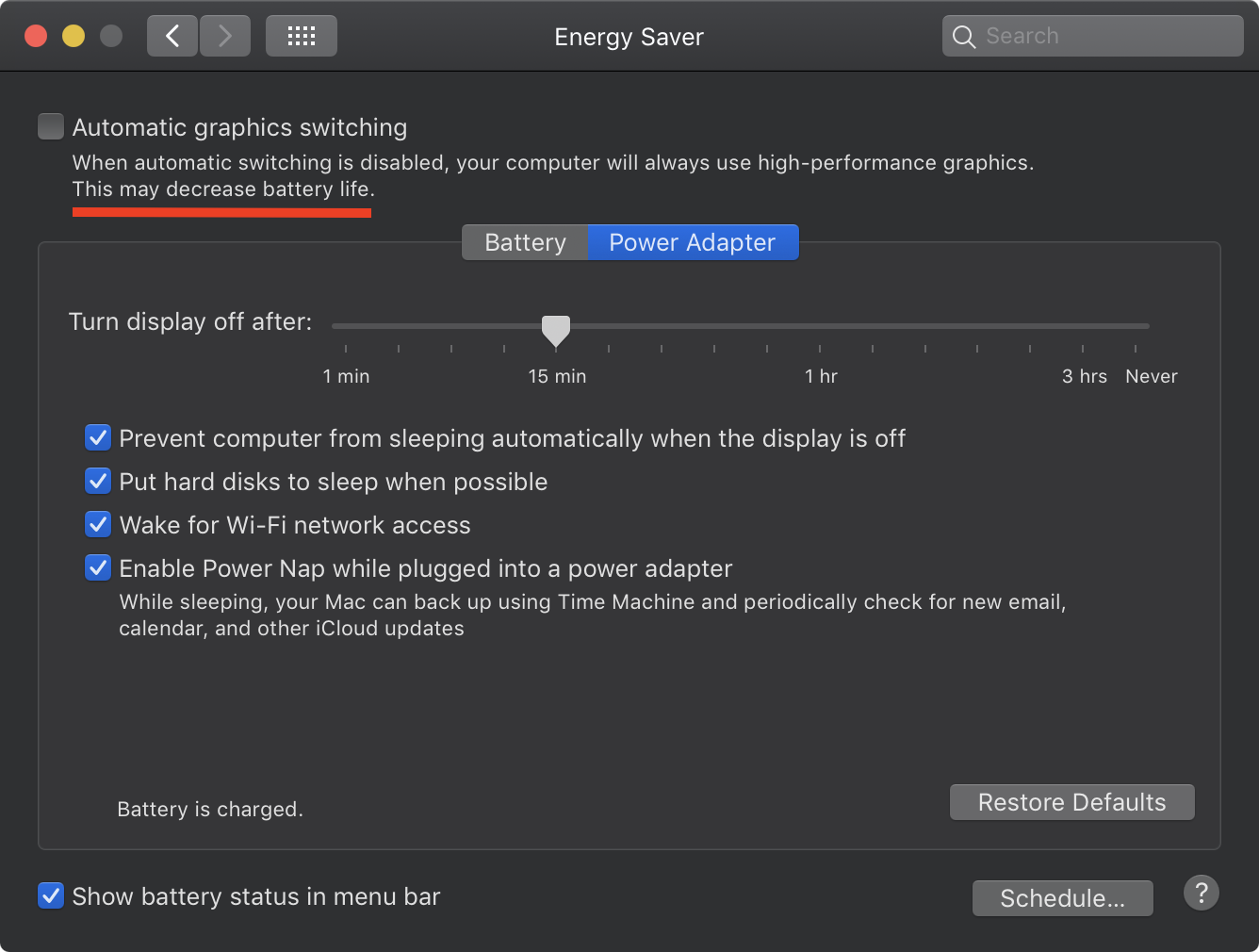 Batteries are consumable and have a finite lifetime, so you get the longest life if you can postpone the time it takes to get to 1000 full discharge and charge cycles. Most Macs will never reach that design goal in 3-4 years except if you exhaust the charge daily.

If you need to always run hot, then you can probably afford $150 every 1000 cycles so it’s NBD but Apple likely wants to be sure you question the need for that setting to blaze through power at the high consumption rate with the powerful GPU engaged.

Hopefully it’s obvious you empty your tank faster from full to empty as well when you tick that option.

Both, one directly from using more power, the other indirectly from deeper discharges (for the same time off AC power) and/or running hotter while plugged in and sitting at full charge.

Using more power will shorten the max time you can use it during one discharge starting at full, ending when the laptop powers itself off.

If you plug it back in before then, then saving power will mean that discharge cycle wasn't quite as deep.

Every charge/discharge cycle has a small cumulative impact on the available capacity of a Li-ion battery. (I think that's approximately true). The deeper the discharge, the bigger the impact. Bouncing around multiple times between 60 and 80% is probably better for a battery than discharge from 100 to 10% and then back up to 100%. Also sitting around at full charge, especially at high temperature, is harmful to capacity, so laptops that spend all their life plugged in can still wear out their battery.

Also keep in mind that the meaning of "100%" and "0%" is set by the battery controller electronics. If a Li-ion cell ever literally discharges all the way (like with a resistor across the terminals), it can never be safely charged again: it's at high risk of catching fire if you did charge it. So the laptop electronics shut off the laptop before that happens, making the actual "0%" safely far from chemically fully discharged.

See https://batteryuniversity.com/learn/article/how_to_prolong_lithium_based_batteries and other things you can google for more info about modern lithium batteries, and how spurs of lithium metal can form that reduce useful capacity. I think there can be some cases where a charge/discharge cycle can restore some life to a battery, but probably not a super-deep discharge.

Your laptop's discrete GPU ("high-performance graphics") uses more power than the integrated GPU. When automatic graphics switching is disabled, your computer will always use the discrete GPU, instead of switching to the integrated GPU when possible. This will make your computer use more power, so it will run for less time on battery, and thus the option will "decrease battery life".

The wording is a little ambiguous, but it isn't meant to imply any sort of lasting damage to the battery.

The message simply means that the MacBook's battery charge won't be used in the most optimized manner and it will lose charger quicker thereby reducing battery backup (life).

Batteries have a finite lifetime before which they start losing charge holding capacity. Thus, quicker discharge will lead to cycles getting consumed quickly thereby reducing effective lifetime. Thus the message could be indirectly inferred to mean that battery life will be reduced.