TL;DR: Is there an app (or some other means) that would allow me to create a grid of webhook buttons (which accept a json string) that work like the example in this video (i.e. single tap to issue command, no changing of screens)?:

Note, the beeping in the background is my air conditioner. I also want the following: if the command to be issued takes a second or 2, I want each tap to queue up the commands in series. So say I tap 5 times rapidly - I want all those 5 taps to result in 5 webhook calls regardless or how long it takes to issue the command.

The requirement of accepts a json string means: not only is there a URL entry for creating the button, but also a text area to enter the content of the json. I only have 1 webhook URL and different commands are issued based on the json content.

I recently bought a Broadlink RM Mini 3 and while the associated iOS app isn't very slick or pretty, it's highly functional, so much so that it has inspired me to figure out how to create my own remote interfaces that use webhook posts to issue commands. Here's an example of a custom remote interface I made for my first floor window unit air conditioner using the broadlink app (unfortunately named "e-Control"): 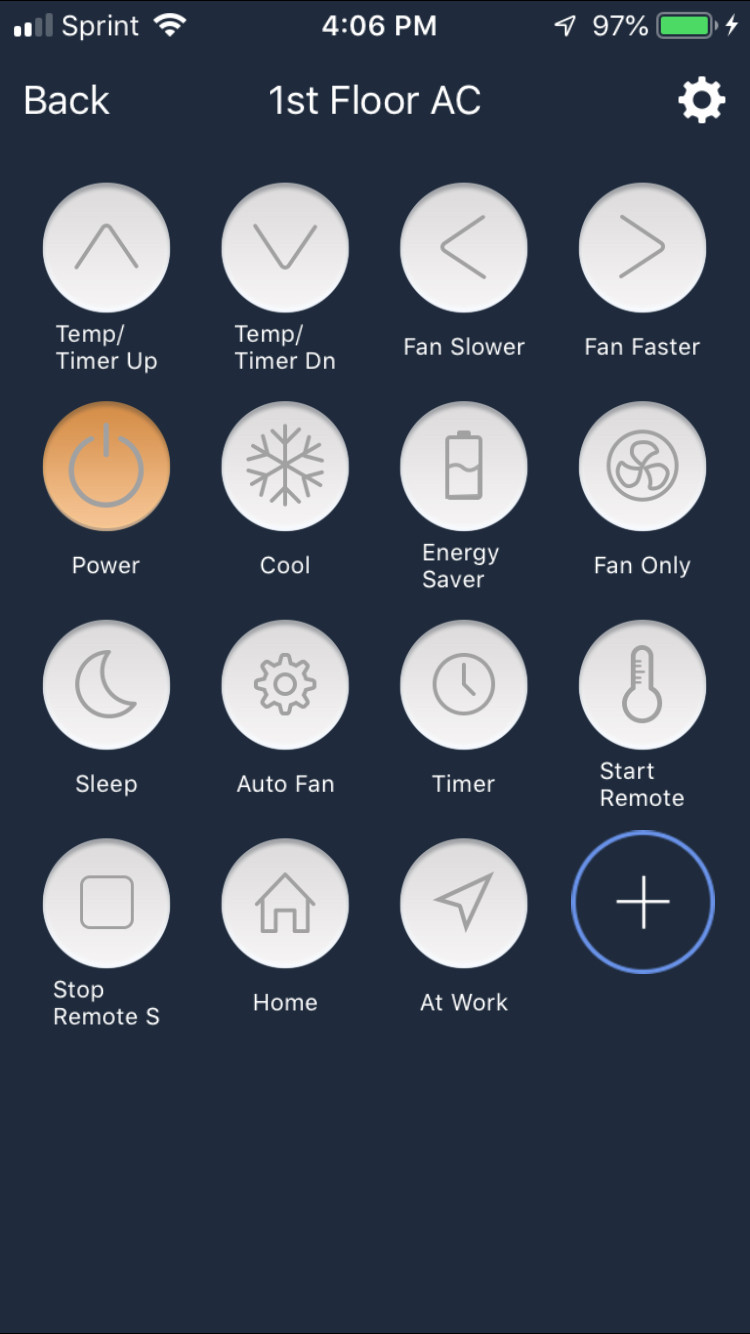 I have a number of automations setup in Node Red on a Raspberry Pi that I wish to control with webhook buttons. Many of the automations are also setup in Homebridge and thus, they show up in the Home app, but some simply don't work in the Home app (such as the volume controls for my stereo which I broadcast from my RPi at 27Mhz).

I have webhooks set up (e.g. for the stereo volume) and I can initiate them via Siri Shortcuts - and I even added them to the home screen, but I don't like the widgets interface and using the Siri Shortcuts app is slow and requires multiple taps per volume up/down command. The closest thing to what I'm looking for is the Siri Shortcuts widget screen. I also tried creating IFTTT widgets, but that's even slower because it requires 2 chained webhook posts.

So I've been looking for an app or some other way to create "buttons" that issue webhook posts that I can arrange at least in a nice grid like the broadlink app. It would also be great if it would "queue" the taps so that I can turn up my stereo volume with 5 quick taps, meaning if each tap takes a second or 2 to transmit, all 5 taps eventually get sent in series.

Does anyone know of a way to create webhook buttons like the kind I'm envisioning?

1
iOS camera tap to focus animation
1
Launch Center Pro URL-scheme syntax for launching an action
1
Image to be shown on one tap on iOS?
1
How to quick reply with Google Hangouts on iOS 10?
1
How to add a custom widget to IOS 10? (Website)
1
iOS 10 tap home to use
0
iPhone SE touch recognition and battery problem