I just went to Apple's website (July 2019) to find the maximum processor spec of a 15-inch Macbook Pro to be: 2.4GHz 8‑core 9th‑generation Intel Core i9 processor, Turbo Boost up to 5.0GHz

However, my Macbook Pro (15-inch, 2018) has a processor spec of 2.9 GHz Intel Core i9. Update: After reading the answer where six cores is important, I found the more official spec from Apple: 2.9GHz 6-core Intel Core i9, Turbo Boost up to 4.8GHz

Why has the processor speed gone down? Does it have anything to do with the heat problems I heard about in 2018?

Your question is actually based on a wrong assumption, namely that you're interpreting the specs of the current 2019 MacBook Pros as being lower than those for the 2018 models.

At the risk of oversimplifying things with this analogy, having eight cores compared to six cores is like having eight people v six people trying to do some heavy lifting. In most cases, eight people each capable of lifting 50kg each is better than having six people each capable of lifting 60kg each. Worse, not all problems can be evenly or efficiently divided, so having 7 people standing idle while one works is more the norm and the entire system balance is far more important than any fractional increase or decrease in core count or speed measuremen. Those only matter when all the other primary factors are perfectly equal which usually happens only in benchmarks or hours long video rendering exercises.

To put this into perspective, testing both these MacBook Pros using the same benchmarking tests, we get the following results: 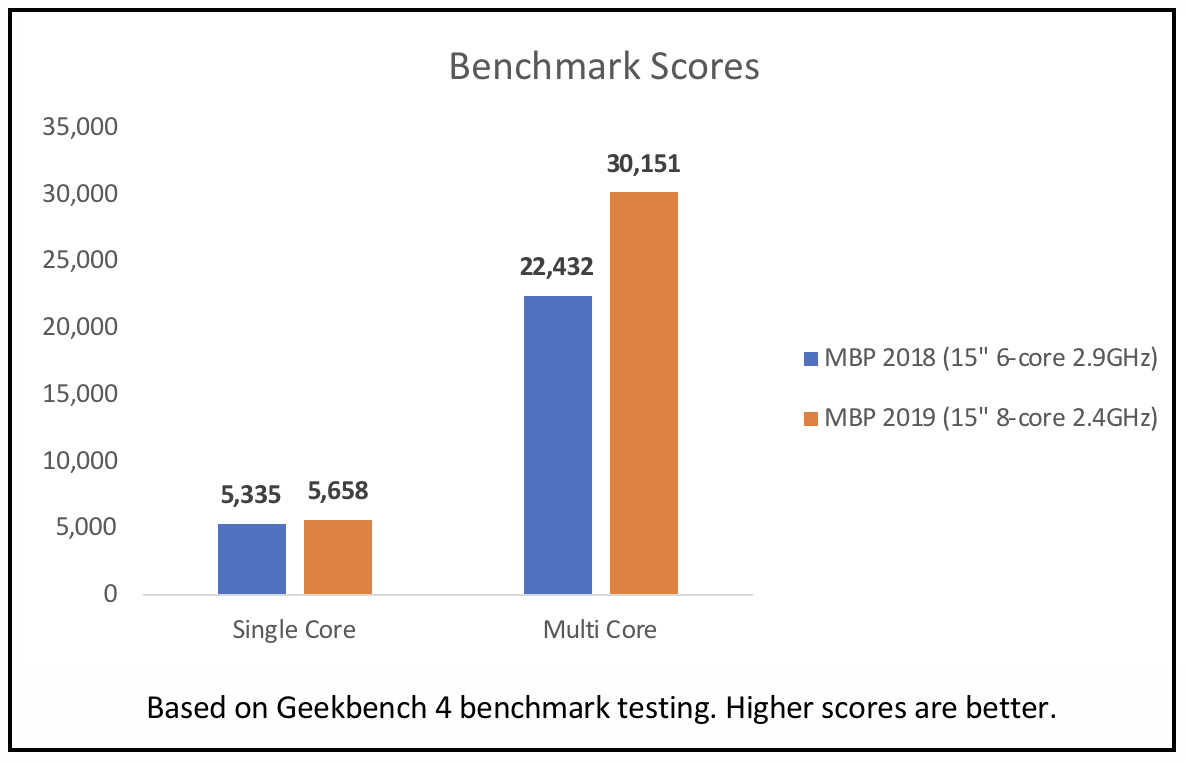 Information on how to interpret these results is available here

In summary, the above chart shows:

So, as you can see, the newest MacBook Pro specs are not lower than those of the 2018 models.

Not the answer you're looking for? Browse other questions tagged macbook-pro performance processor .

0
Which exact processor model do the macbook pros have?
31
What is the new turbo boost in the MacBook line?
0
Will the new MacBook be turbo charged?
2
Apple MacBook Pro Battery vs Processor
3
Will upgrading to a 32 GB RAM Macbook Pro significantly speed up Adobe Illustrator?