Unfortunately my 2012 MacBook Air came off second best with a cup of coffee. Everything toasted except the SSD! As luck would have it, I have access to a 2011 MacBook Air (El Capitan) which I am now using. The only issue is I would like to get the data off the old one.

I have removed the SSD, purchased a SATA converter which I plug the SSD into, and then a SATA -> USB cable to plug this into the 2011 MacBook Air.

When I plug this in, the disk does not mount. From inside the OS I can

From single-user mode, I have tried the following

Added as an answer after comments...

Initially a guess, that the disk was formatted APFS, which would be unreadable by El Capitan.

Upgrading to High Sierra would enable the disk to be read & written as normal.

As regards permissions; you could either add yourself to the user list, as an ACL, or you could just Get Info on the drive itself & check the 'Ignore ownership on this volume' box. 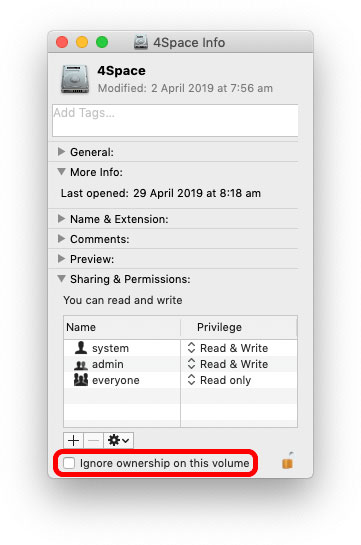 Not the answer you're looking for? Browse other questions tagged macbook-pro ssd mount .