How to find cause of high kernel_task cpu usage?

Occasionally my machine will have a kernel_task instance max out the CPU: 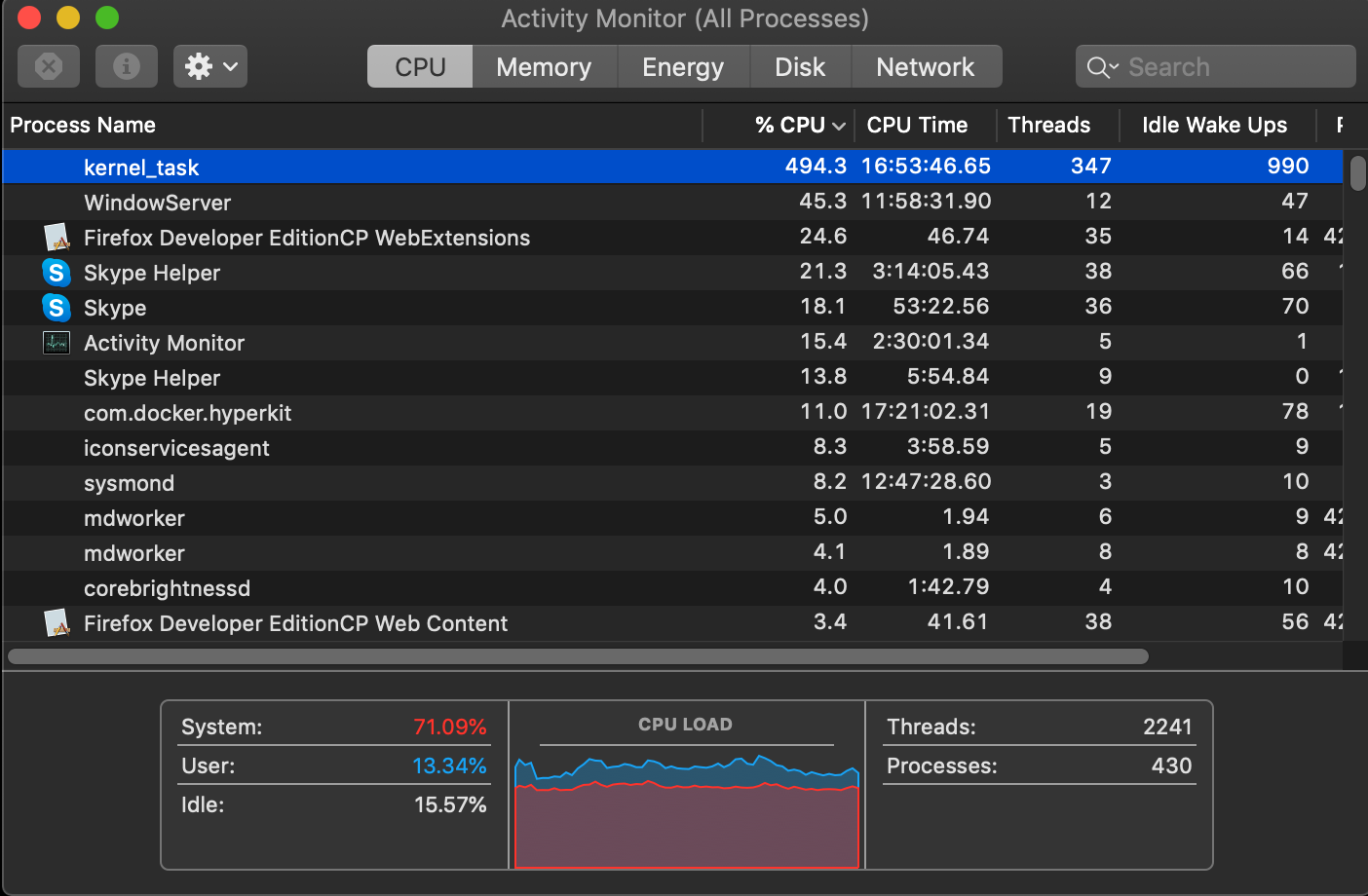 This can last from minutes to sometimes hours. The machine is effectively unusable in this state. Restarting doesn't help; a new kernel_task pops up again until it finishes whatever it's doing.

TLDR; If your MacBook Pro runs hot or shows a high % CPU for the kernel task, try charging on the right and not on the left.

Actual CPU temperature or application CPU usage is uncorrelated with kernel_task. A hot CPU is throttled by reducing its clock speed, not by scheduling fake no-op load.

The graphs below are from iStatMenus. The machine had been used on battery then plugged in.

State A a USB-C hub (a mouse and keyboard, plus power) and a USB-C HDMI 2.0 adapter, both on the left side. You can see the Thunderbolt Left Proximity temperature sensor rise quickly. About 3-4 minutes later the dreaded kernel_task high CPU usage starts.

State B cures the kernel_task problem by moving power from the left ports to the right. The left side temperature drops and the kernel_task goes away within about 15 seconds.

State C shows that simply having stuff plugged in to TB ports raises their temperature significantly. Both the hub (mouse and keyboard ONLY) and HDMI adapter individually raise the temperature about 10 degrees, and 15 degrees together.

(all other temperatures were both low and flat. Under 55 degrees.)

Note that high temperature on the right side appears to be ignored by the OS. Plugging everything into the two right ports instead of the left raised the Right temperatures to over 100 degrees, without the fans coming on. No kernel_task either, but the machine becomes unusable from something throttling.

Ergo, high CPU usage by kernel_task is caused by high Thunderbolt Left Proximity temperature, which is caused by charging and having normal peripherals plugged in at the same time.

To actually answer the question:

The only way to actually ask the kernel what it's doing is to attach a kernel debugger. That means getting a debug kernel from Apple, rebooting, then using a second Mac to attach to the debugged machine. You can then examine stack traces and guess what they mean.

Otherwise guessing and testing is the only way. Of course that leads to false conclusions more often than not.

Today I had this problem.

Interestingly, after changing the port I'd been using for charging the laptop and using a different port of the laptop, the CPU usage dropped: 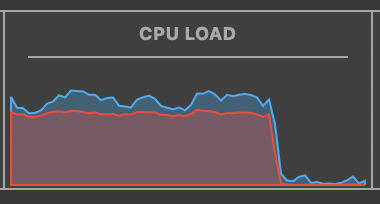 As it persists for a very long time, and it persists across restarts, it seems likely that your problem is caused by a hardware problem - namely lack of cooling. You do not describe which type of computer you have, but try looking at its cooling to see if it's working as intended. You might have a broken fan, lots of dust or similar.

The kernel_task virtual process does, amongst other things, throttle CPU usage in order to keep the CPU below its maximum operating temperature. The purpose is to keep the CPU from shutting down unexpectedly. kernel_task does this by ensuring that the CPU is doing nothing for long periods of time - essentially making sure the CPU uses as little power as possible, which means that it gives off less heat. This makes it seem like kernel_task is using a lot of CPU, but in reality it is not.

For me this happens almost everytime I connect to an external monitor. The graphics switches to dedicated ones and the system starts to overheat in just under 5 min. Took me quite a while to figure this out. Room temperature is 27C so I don't think it's related to hot weather as well.

If you're encountering this on Macbook Pro 16'' (2019), this seems to be a well-known problem regarding the laptop body not being able to handle the heat from both the CPU and GPU when external monitors are connected. The ultimate solution seems to be to use an eGPU... which would probably not be practical for most people.

An AMD Community thread further pointed out that the culprit is that the dGPU goes on full drive and draws ~20W of power whenever the laptop outputs to multiple monitors, seemingly because the driver lets the dGPU memory run on full clock speed "to avoid tearing". This quickly leads to the chassis overheating. Outputting to only one monitor (the count includes the built-in monitor), with no scaling or integer scaling of the resolution, seems to reduce the power usage to ~9W and thus solve the issue.

Funnily enough, whenever my Mac becomes sluggish, I seem to be able to put it to sleep and wake it up a couple of minutes later in order to make it responsive again for an hour, without closing any apps. This is likely because the power usage on the dGPU drops before going back to ~20W again.

It’s usually temperature. Buy a small desk fan and point it at your MacBook rear. I used to have this problem and since using a fan it never happens.

Running spindump and or sample process from the activity monitor may help provide you with more information about what’s going on. Try to keep notice of when the CPU usage climbs and then look at the CPU Time on the other items listed in activity Monitor. You may notice a certain process starting up around the same time. Looking into threads in/out can help diagnose too. The issue could be either a bug within the kernel itself or whatever is requesting CPU time. It’s okay to have the CPU jump up every now and then if you don’t notice any system performance or temperature issues. Macs are built with their CPUs to withstand very high temps.

If you download a lot of apps the Launch Daemons, Launch Agents, and startup apps can add up quickly, possibly consuming CPU. It seems your system is having a lot of wake ups. Something could be hung up? You could also run “top” and “lsof” to get an idea of what the kernel is talking to. Also opening console and checking out the logs for any repeating errors helps. Testing a new user account will isolate any user related issues.

Look at you kernel panics and logs to see if there any reoccurring issues.
Make sure your fan starts spinning up when the computer gets warm. If not it could be a SMC issue. You can download software to control the speed of the fans to see if it reduces the CPU %.

The instruments app that comes with Xcode has some debugging and tracking features that also can help.

First measure the temperature around the Mac and then see if cooler air reduces this.

In your case, Skype and Firefox are getting all the cycles left over due to running hot. Windowserver and kernel just do the bidding of the other programs. Also, for a longer term view of what the CPU is doing, watch the energy tab in activity monitor.

By closing the apps that take CPU, you can “let the system run cool”. Running like this won’t hurt things, just there are thermal limits so more efficient apps or less demanding tabs / video / content lets you get more work done before the system protects itself.

Also on Catalina, you can see actual GPU usage in Activity Monitor and test changes to browser settings if you think GPU is putting the machine into thermal throttling states.

I own a MacBook Pro (15-inch, 2016). The theory given in accepted answer is correct that the cause of high cpu usage by kernel_task is due to the fact that you are plugging the charger in sockets at left. Using sockets at right immediately fixes the problem and the cpu usage for kernel_task dropped as well. However following are my findings,

I would really recommend the second option as it is much easier, cheap and doesn't incorporates any risk of any kind.

I'll just leave this here in case it helps someone else:

For me, the issue went away when I switched to a charger with higher watt capacity. I accidentally had been running with a 15W charger instead of 87W. This caused the charging to be prolonged, heating up the whole computer.

Not the answer you're looking for? Browse other questions tagged macos kernel .

18
kernel_task consumes 500% CPU on AC power, sometimes
156
WindowServer high CPU on Yosemite
31
Why is kernel_task using so much CPU?
26
CPU usage is too high with Yosemite and an external monitor
33
What exactly does kernel_task do?
14
kernel_task hundreds of % CPU yet cpu frequency is being lowered
2
Are these normal temperatures?
1
kernel_task, high CPU and fans going crazy, no applications open, no launch agents/daemons
1
High CPU usage by system
2
kernel_task high CPU consumption and slow Mac
See more linked questions

15
Why does SystemUIServer cause high CPU usage?
3
kernel_task is using 90% CPU, what could be the cause?
117
How to bring back multi-touch gestures after it crashes without reboot?
7
Very high kernel_task CPU usage after updating to Yosemite 10.10.4
18
What causes the UserEventAgent to run with 100% CPU usage?
0
Safari 8.0 - 9.0 100% Cpu usage OSX 10.11.3 might be related to bookmarks / favorites
13
How do I disable/configure macOS Sierra's auto throttling of the CPU for processor intensive tasks
1
High Sierra: WindowManager and kernel_task - Now you see it, now you don't!
5
External monitor causes very high CPU usage