I just bought an iPad. I have been Windows and Android user all my life. In Android I could just transfer a video file to the device and any video player such as VLC or MXPlayer would automatically detect it.

I transferred a few video files to my iPad from my Windows PC using iTunes software's file sharing option. I installed PlayerXtreme on my iPad but I can't find any video files in it.

How do I make it work?

File transfer doesn't work in iOS like other desktop and mobile platforms. In fact, generally speaking, iOS doesn't treat filesystem as a user accessible entity separate from the installed apps (which is a norm in almost all platforms, even macOS).

The user experience in iOS is focused on apps which are responsible for managing their own data. Inter-app data sharing is done using a concept called extensions.

Each app generally manage it's own data in it's own segregated/sandboxed storage space (which could go up to a maximum of available storage space on device) which is not accessible to other apps. File sharing is a iOS feature using which you can transfer data for an app to and from your computer using iTunes (which is available for macOS and Windows).

However, for File Sharing to work, you'll have to have the app pre-installed on your iOS device before connecting it to your computer. It appears that based on your experience with other platforms, you have assumed File Sharing to work like connected storage device, and transferred the files to a different app which also happens to support File Sharing feature.

Do note that not all iOS apps support File Sharing. It is available only if some of the app features require it and the developer of the app has programmed it.

To remedy your situation, start by installing the app, PlayerXtreme Media Player in your case on the iPad. Once the app is installed, connect your iPad to your computer and launch iTunes. Click on the iPad button shown in the toolbar and then click on File Sharing in the sidebar on the left. All the apps supporting File Sharing are listed under Apps list as shown: 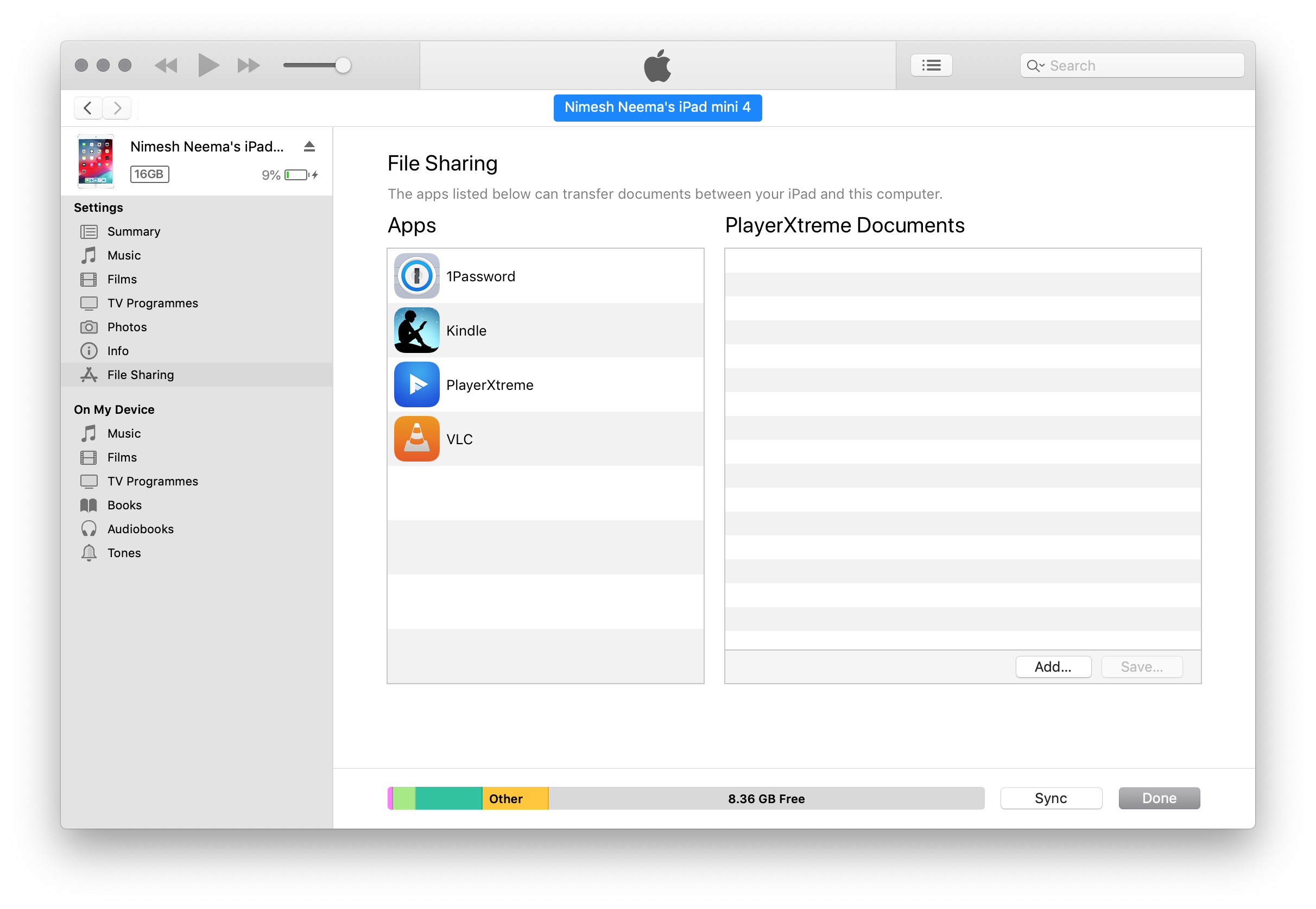 Notice that in the above screenshot, none of the apps listed under Apps list is selected. Now select the desired app (PlayerXtreme in your case) by clicking it. Once you have the app selected, drag and drop the video files from Finder under the area titled PlayerXtreme Documents. 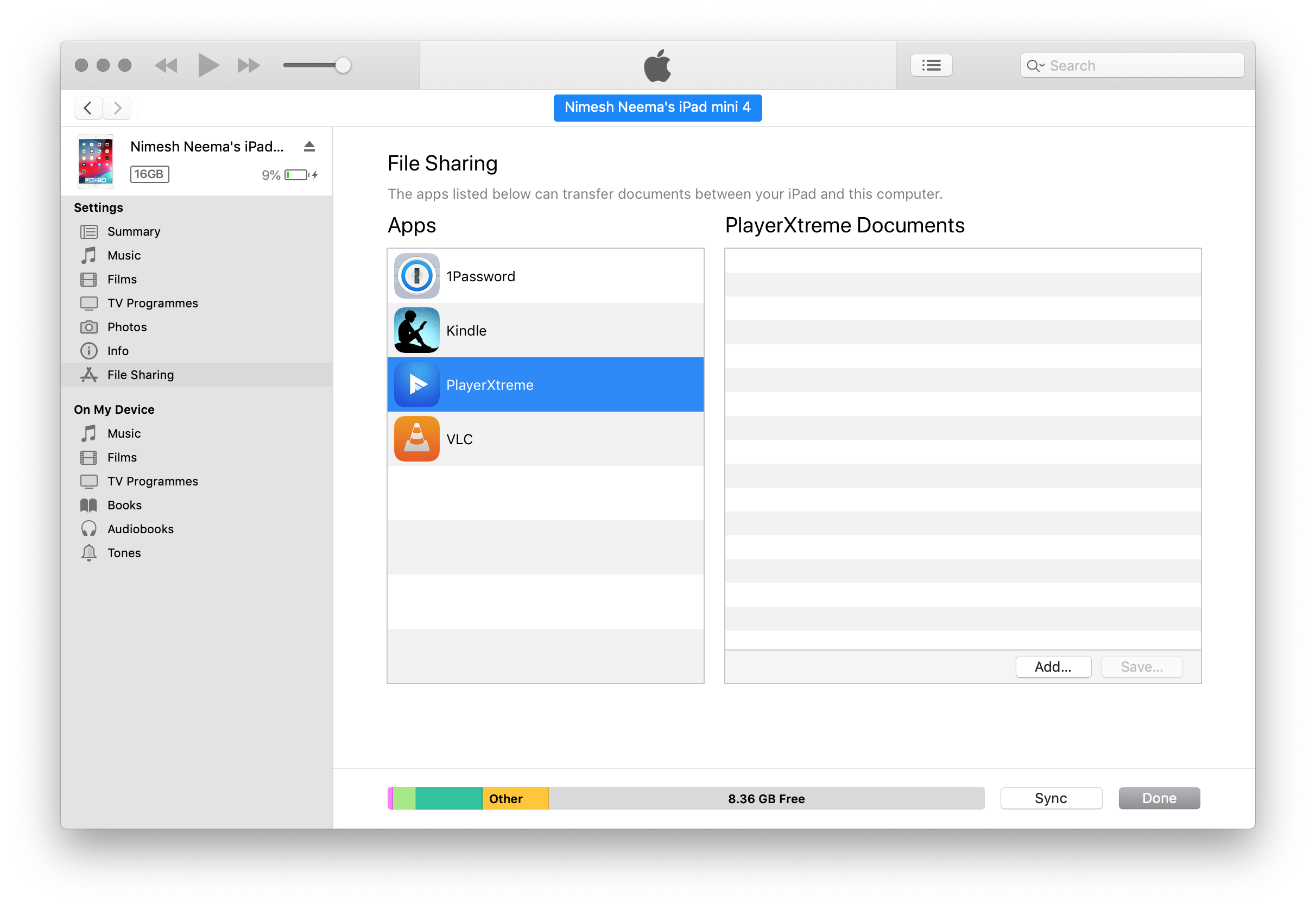 Each app manages its documents separately. If you have accidentally added the videos to a different app, you can't move it between apps directly on iPad. You'll need to delete the videos from the wrong apps documents first and re-add them into the Documents for the desired app (PlayerXtreme in your case). Here, for example, I have added a video and the corresponding subtitle file to VLC app documents: 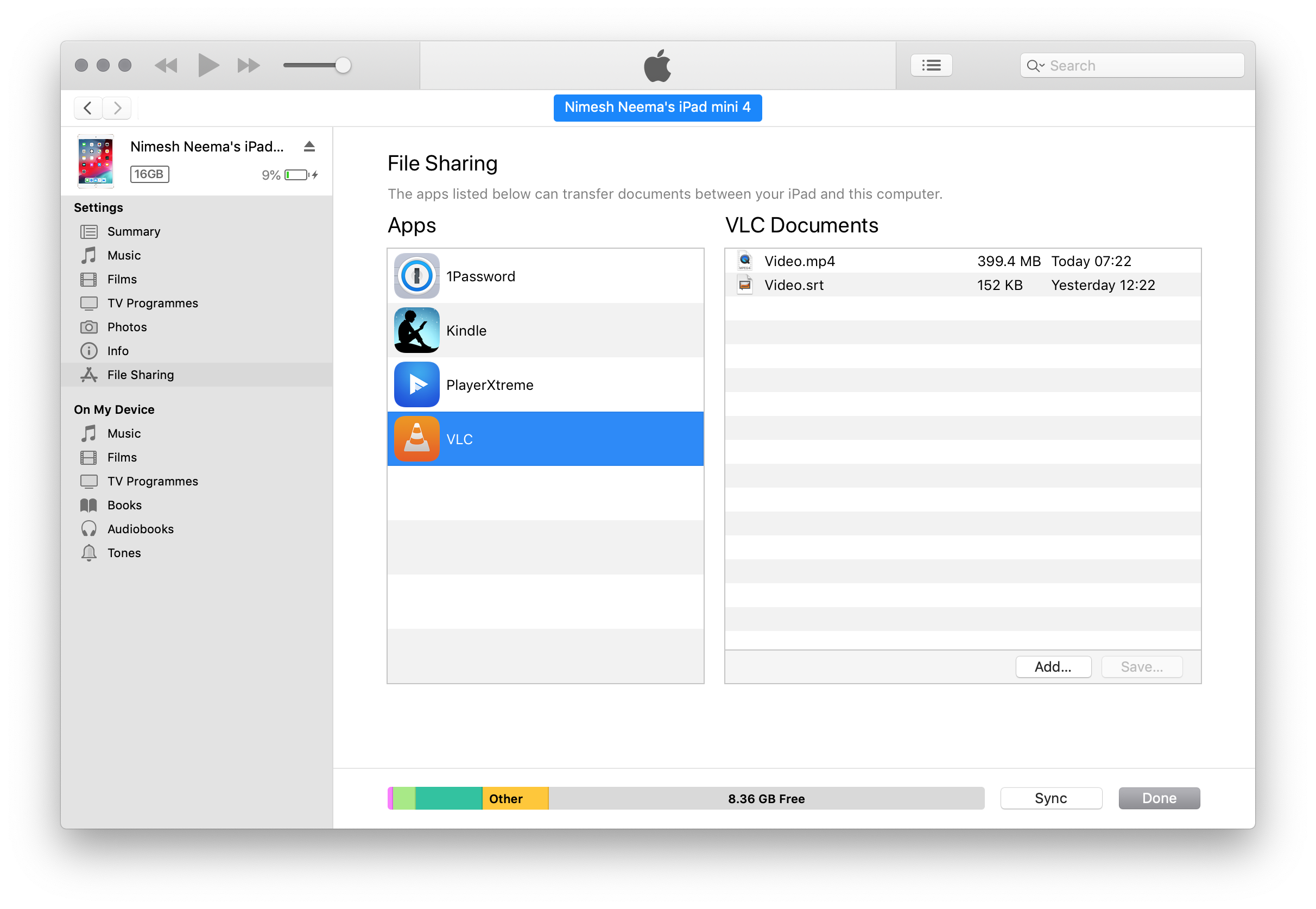 Also, an important thing to note is that neither iOS or iTunes check if a file type is supported by the app. It lets you transfer any file type into app documents as long as storage space is available on iPad.

Coming from a different platform, you may find this kind of workflow quite cumbersome, but this is by design on iOS and made so keeping user data privacy and security in mind.

Now, youâ€™ve got a feeling for the sandbox and files structure and can see if your existing videos play natively from within the files app or you want a player that supports your library or youâ€™ll convert your library to a format thatâ€™s native.

I would avoid iTunes or thinking of the iPad as just a storage device. Or just save the files to usb and connect usb to iPad to get started. The less computer involved initially, the happier your experience will be due to a faster learning curve.

Not the answer you're looking for? Browse other questions tagged itunes ipad video file-transfer mediaplayer .

1
Store video on iPad and play video without using native iOS 5 Videos app
0
How to transfer video files from ipad air to macbook air
1
Playing AVI file with XviD codec crashes my VLC and doesn't play on quick time
2
How to transfer MKV file from Windows PC to iPad Mini
1
Which files are transferred when using Transfer purchases from?
6
Transfer files to iPad via USB from Android
2
iPad: Login with two Apple ID like Windows users
2
Different free storage space reported in the Files app and in Settings â†’ iPad Storage
1
Is there a video player on windows for iPhone recorded videos?
0
How to sync videos between a PC and an iPad?