how to delete a locked app

I'm running High Sierra on my older iMac. I recently loaded the Karabiner-elements.app but when I tried to delete it, a message appeared that said it was locked and couldn't be deleted. So I opened Get Info for it and confirmed that the app was locked. I couldn't uncheck the locked box so I clicked on the 🔒 icon at the bottom. The box where I can uncheck the lock feature is still greyed out. 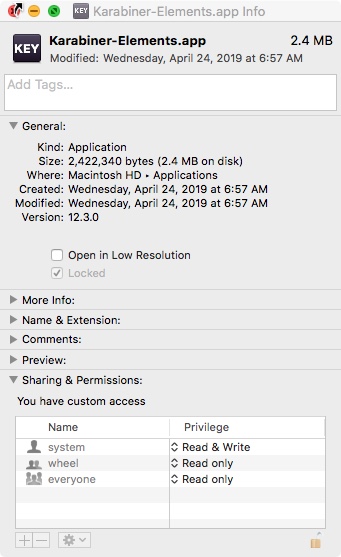 I also opened a terminal window and navigated to the /Applications folder. I determined that the Karabiner app was there and I typed sudo rm -r Karabiner-Elements.app but I got a message that said Operation not permitted.

How do I delete this app?

It should be done in the app itself.

You can also uninstall Karabiner-Elements from command line.

Not the answer you're looking for? Browse other questions tagged macos uninstall .

0
Chrome: full screen shortcut does not work
1
How to delete a locked app using superuser privileges?