Recently, I have been having battery issues. I lost the 61W charger that came with my Macbook several weeks ago, and in the mean time used a 12W iPad charger. This didn't work fantastically well but I did not expect it to.

Since I have found the original charger, it does not appear to be working any more. There is no apparent damage to the charger (although I did buy a new cable, since the original was discoloured).

Therefore, it did not seem that there was an issue with the charger.

However, my Macbook has still been charging slowly and, according to the System Report, it is only receiving 12W. This is despite using the original 61W adapter and a new 60W cable.

I've tried turning the Macbook off and on again, as well as resetting the SMC, with no effect. 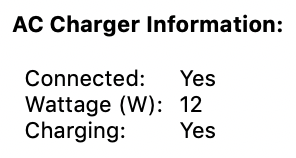 3
My MBP will only charge with a T shaped magsafe now
4
60w charger only delivering 5.5w to battery?
3
MacBook Pro only charges with smaller MagSafe 60W
3
Macbook Pro 15 inch 2019: will charging from LG 38WK95C-W via USB-C damage/fry the macbook's battery?
0
MacBook Pro will only charge if using a 3rd party adapter after battery replacement
0
My 13” MacBook Pro 2020 Thunderbolt port not working/charging
0
Macbook Pro think 60W adapter is a 12W one, and won't charge anymore