I have a 2009 Mac Pro (flashed to 5,1) with a Sapphire Radeon Pulse RX 580 8GB GPU I acquired to support Mojave. The configuration has been happily stable since late 2018 and performed as expected with my venerable 30” Apple Cinema Display.

However, after a decade of use, the display was showing signs of pixel fatigue, so today I unpacked an LG 34BK95U-W 34" 5K monitor and connected it to the RX 580 via DisplayPort. 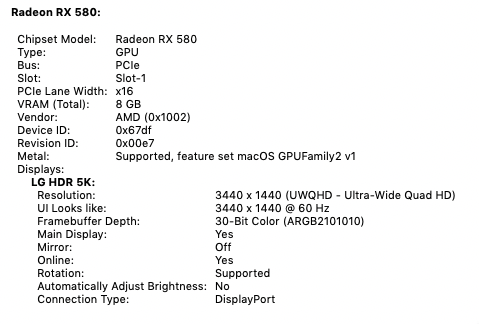 So far, I’ve unplugged, plugged, and reseated everything, reset the SMU, and zapped the NVRAM. No joy. Attempts to get support out of Radeon and LG have (predictably) failed, and the problem is so specific I’ve not been able to find anyone in similar straits. Research into DisplayPort, while interesting, hasn’t proved enlightening.

I’d really like to understand how I’ve gone wrong. "It all looks good on paper." I can pack the thing up and return it, but I’ll still have to address the issue of needing a new display and wanting (pardon me) a big one.