How to stop "NTFS new version", or any notification for that matter?

I used paragon NTFS for a while and then deleted it from applications folder. I also removed the dmg file(I know it would not stop notifications).

Clicking on it is useless. Safari would open(if not already) but no new window, no webpage, nothing.

I searched the Library folder for NTFS and paragon and deleted files and folders for e.g. from application support, from caches. One folder in its name had "notification". I deleted that too. Unhid hidden files by CMD + Shift + . For a temporary fix, I turned off notification from System Preferences. But I need a permanent fix.

Any App you need to actually run an installer & give admin perms, rather than just drag to Applications, installs elements somewhere inside the 'system' itself.

It is not wise to just throw these out if you no longer want them, as they will leave all the system bits behind.

As you threw away the component which contains the uninstaller, the app itself, then by far the simplest way to uninstall it will be to get the installer again, install it, then use its own uninstaller to uninstall it.
At the moment it is still entirely functional, you only threw out the control surface. 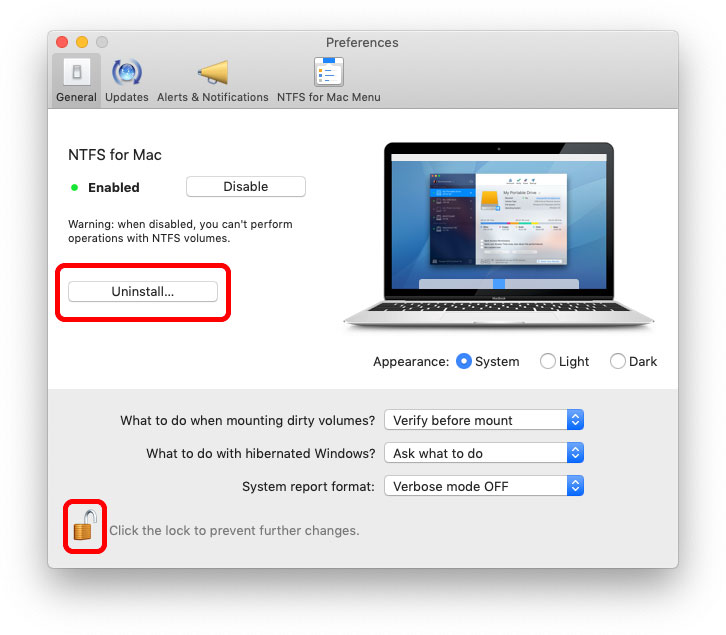 Open System Preferences app → Notifications, find the application (I'm guessing it would be Paragon NTFS or something similar in this case), set the alert style to none and disable all the checkboxes below.

For the Paragon NTFS specific notifications, it sounds like you may have some component still installed.

Check that there's nothing under System Preferences app → Users & Groups → Logged in user → Login Items for Paragon NTFS, that there isn't anything installed via the macOS App Store, and that there aren't any processes running for it when you look in the Activity Monitor application.

Not the answer you're looking for? Browse other questions tagged macos mojave notifications ntfs .

0
How can I find the source of a Mac desktop notification?

2
How can I batch rename files to copy them from OS X to Windows NTFS?
1
Finder error -50 when moving files from external NTFS hard disk
1
OS X Yosemite always mounts usb-hdd to the new folder
2
Paragon Driver for Seagate
1
Can there be problems copying files from AFPS to other file systems?
1
New "Resource busy" error when trying to mount DMG files
2
How do I clone an installation of Windows 10 from macOS?